After NXT TakeOver: Toronto, Paul “Triple H” Levesque, WWE’s Executive Vice President of Talent, Live Events and Creative, answered questions in person and on the phone from media, calling it “across the board, a phenomenal show.”

The main event, Adam Cole defeating Johnny Gargano, was violent but not bloody — “there was no blood anywhere” insisted Levesque, pointing out that it was no different than the regular weapons on a show, other than the barbed wire of the cage at the top to keep people out. “What was the gore and the guts that we went to?” 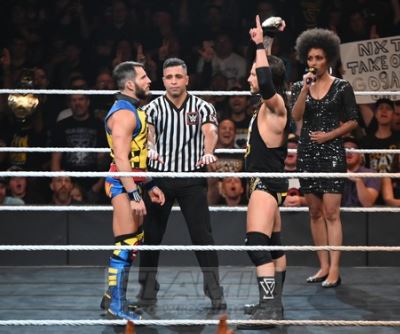 Adam Cole and Johnny Gargano get their epic bout under way. Photo by Joe Hrycych, www.hrycychphotography.com

He praised the pacing, saying it “was right tonight,” and that the lengthy main event, with its two out of three falls, was structured “so that it can connect in a certain way.”

HHH sees it as “a final battle scene” of an epic trilogy between Gargano and Cole.

The main event wasn’t the only thing he praised

“Io Shirai arrived tonight,” he said, referring to the Japanese woman star and her defeat of Candice LeRae. He also listed other women on the NXT roster and coming up the chain, calling it an interesting time.

The NXT tag team champs, The Street Profits (Montez Ford & Angelo Dawkins), got some love too. He thinks there is “no limit” to their possibilities, where Dawkins has been with the company for a while, and Ford is newer and rising fast.

Velveteen Dream’s creative entrance for his successful NXT North American title defence against Pete Dunne and Roderick Strong, with the Toronto Raptors dance team and Royal Canadian Mounted Police outfits, was “a combo of ideas,” and not attributable to one particular person.