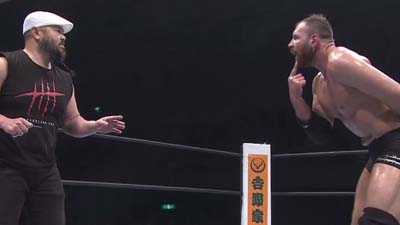 Only two points separates B Block leader Jon Moxley from his closest competition. Tetsuya Naito, Hirooki Goto, Tomohiro Ishii and Jay White all sit in second with eight points each, Moxley has ten points after Night 14 of the G1 Climax 29 tournament.

B Block members Jeff Cobb, Taichi and Shingo Takagi are all out of the running.

Moxley suffered his second straight loss as he was bested by Bullet Club leader Jay White.

Moxley cut off Switchblade from pulling his usual shenanigans. Just seconds after the bell, Switchblade was thrown into ringside barrier three times and choked out. Gedo snuck in though taking away a table Moxley had set up.

White chopped and kicked at Moxley in the ring. That just infuriated the Deathrider who charged at White pushing him back into a corner where he was chopped and punched. White tried to duck out of the ring but Moxley dragged him back in by his hair.

Moxley strode over to the ropes locking eyes with Gedo for a moment. White stunned Moxley with a guillotine over the top rope and two DDTs. White jumped on Moxley raining down punches on his face and skull.

White took Moxley to the floor slamming him into the ringside barrier and the steel post.

Moxley dragged White all the way back to New Zealand throwing him into an entire row of seats, wrapping his legs around a seat post for a figure four.

Back in the ring, White grabbed Red Shoes and fell into him. White low-blowed Moxley, Gedo punched him in the face with brass knuckles. Moxley kicked out. White kicked out of the Regal Knee. Gedo distracted Moxley again so that White could hit two Sleeper Suplexes, Bloody Sunday and Blade Runner to win but not before Moxley knocked out Gedo and gave White a Steve Austin two finger salute.

In a battle of the Los Ingobernables de Japón powerhouses, leader Naito defeated Shingo Takagi with a running Destino and a standing Destino.

Chaos (Will Ospreay, Kazuchika Okada and Yoshi-Hashi) beat Karl Fredericks, Clark Connors and Kenta. Connors submitted to Yoshi-Hashi’s Butterfly Lock. Kenta and Ospreay take a few swings at each and trade some nasty words with one another.