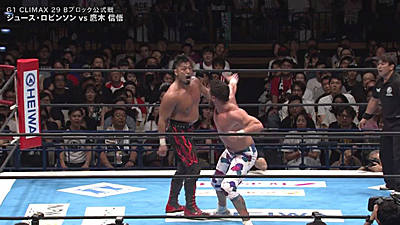 It was a night of upsets as B Block took centre stage at the G1 Climax 29 tournament.

In a shocker, Juice Robinson defeated Shingo Takagi, who was virtually unstoppable in the Best of the Super Juniors tournament just a few months ago.

Robinson sent Shingo flying into a corner with a Juice Box and connected with a cannonball flattening Shingo. Robinson held onto a Superplex from the top rope to Jackhammer Shingo who refused to be pinned. Shingo halted Pulp Friction with a clothesline. Robinson no sold a Saito Suplex to eventually pin Shingo with two Left Hands of God and Pulp Friction.

Jon Moxley, formerly Dean Ambrose in the WWE, started off his G1 tour with a win over Tai-Chi in what was a brawl more than a wrestling match. Moxley even slammed Tai-Chi through a table and then gave him a one-finger salute. Ambrose pinned Taichi with an elevated Deathrider.

Ishii pinned Cobb with a brainbuster after one hell of a slugfest.

A kick to the face and a GTR stuns Jay White and Gedo.

Los Ingobernables de Japón (Bushi, Evil and Sanada) defeated Yuya Uemura, Will Ospreay and Kota Ibushi. Bushi pinned Uemura. Evil damaged Ibushi’s ankle using a ring post to soften him up for their G1 match. Ibushi stood his ground with Evil, tapping his ankle to show it was okay.