When United Kingdom wrestler Heidi Katrina sat near ringside for a WWE show in her early 20s, she felt like the was “on the wrong side of the barrier.”

“I need to be on the other side now,” Katrina recalled. “Now’s the time.”

Immediately after that show, she started training at London’s Lucha Britannia. Seven years later, she has since trained with Dory Funk Jr. and Robbie Brookside, become the first foreign wrestler to hold a Sendai Girls Pro Wrestling championship and completed multiple tours in North America.

“[When she said,] ‘I want you to represent your western culture in our Japanese company,'” Katrina said, “that was enough of an accomplishment for me, having brought a lot of history and whatnot into their establishment. It’s never been done before and… that was satisfaction for me because I admire Satomura.”

Her list of accolades continued in Sendai Girls’ by winning the company’s tag team championship with Cassandra Miyagi last March, becoming the first “gaijin” to hold a title in the company. Katrina said she considers that accolade the “ultimate respect.” In the moments after earning the titles, the British Amazon felt a sense of accomplishment and acceptance.

“For me to be accepted and someone seeing opportunity in me, especially by what I think is the best wrestler in the world… is just a complete honor, really,” Katrina said.

Four years prior, she was brought to Japan for a three-month tour with Reina Joshi Puroresu, where WWE star Asuka (formerly known as Kana) held the Reina World Women’s Championship. Katrina then toured the U.S., Germany and Canada, but returned to Reina and ultimately was scouted by DDT Pro. 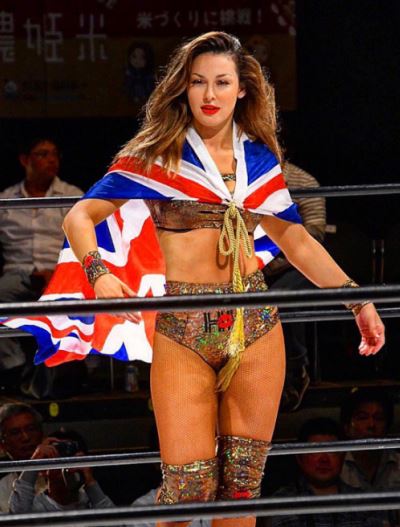 Prior to her first tour in Japan, Katrina had the chance to face one of her idols who has been an integral part of the women’s wrestling scene, Gail Kim, in France. A few years later, she main evented Korakuen Hall with WWE Hall of Famer Jazz.

“[It was] ridiculously hard hitting,” Katrina said. “I just love everything about her… She’s an incredible athlete.”

While in the U.S. earlier this year, Katrina got in the ring with Texas-based independent wrestler Phoebe in Sherman and Amarillo, Texas, for Texoma Pro and Top of Texas, respectively. They faced off in a triple threat the first night and singles action the second.

“This was the first time I met her. My first impression and, no lie, ‘Wow, her biceps are bigger than my head.’ My second impression was, ‘Wow, she is really, really pretty,'” Phoebe recalled. “And my third impression, which was more of a thought, was that I already respected her without even meeting her. Former WWE superstar Jazz had worked with her in Japan, commented on how she wished she could watch our match and just from that comment from someone I’ve looked up to most of my life, I knew wanted to make a good impression on Heidi. Heidi and I bonded really quickly after I told her this.”

Phoebe said she is looking forward to working with Katrina “over and over again.”

“I truly had a good time getting to know her, wrestle her, and we bonded so well in just two short days that it was hard to say goodbye,” Phoebe said.

After Lucha Britannia, Katrina went on to train with the UK’s Robbie Brookside and Marty Jones. She worked with Brookside at his school in Leicester and “clicked with him straight away,” in part, because he was “very straight to the point.”

“I warmed to him really well, and that was four years I spent with Robbie,” Katrina said. “He helped us a lot with our movements and positioning. Also with promos as well. He’s great with promo classes.”

She also trained with Dory Funk in Florida last fall, which she said was a “phenomenal” experience. One aspect of working with Funk that stuck with her was his approach to takedowns and how to transition a judo-influenced takedown into the pro wrestling world.

“He’s an absolute magician, even at his age now… I have my own takedown that he overlooked and tweaked a little bit,” Katrina said. “He literally has all the answers to the test.”

When Katrina broke into the wrestling business seven years ago, she said, it was “a little bit less serious” on the women’s wrestling front.

“It was very hard for us coming out, especially in a man’s world, so to speak,” Katrina said. “I felt like in England seven years ago, in wrestling, we were still seen as on the backburner… rather than female athletes on the show.”

It wasn’t until she traveled to France for her first “out-of-country booking” that she realized there were different views on women’s wrestling.

“Going from France, back to Germany and seeing how the fans were with women’s wrestlers and then when I went to Japan, we were treated if not better than the men,” Katrina said. “Not just as objects, but we were treated as athletes. And getting that respect from fans and other wrestlers in the business… it felt like finally the balance was even.”

“That’s a massive influence,” she said.