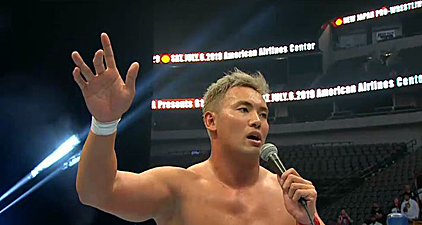 Kazuchika Okada and Hiroshi Tanahashi have battled many times before in the G1 Climax with each match ending in a time limit draw. However, in Dallas at the first night of the G1 Climax, Okada defeated Tanahashi after hitting three rain makers.

The match started of wildly with all four men brawling on the outside of the ring. When the match returned to the ring the Guerrillas of Destiny double teamed Sho to dominate the match. Loa delivered stiff forearms across the face of Sho. Yoh delivered a superkick on Tama Tonga to take the advantage in the match. However, Yoh was super power bombed by the Guerrillas of Destiny for the win.

Umino was tagged in and delivered a dropkick off the top rope on Cobb. Cobb hit the Tour of the Islands on Umino for the win via pinfall. After the match Cobb and Ishii traded stiff elbows, which resulted in Cobb having a bloody nose.

Chase Owens and Jay White vs. YOSHI-HASHI and Hirooki Goto

Owens and Goto started the match off with White using a sneak attack to take advantage in the match. However, Goto quickly recovered and cleaned house on the bullet club. White and YOSHI-HASHI brawled on the outside of the ring with White driving his spine into the edge of the ring. Goto had Owens tied up in the middle of the ring and White snuck up behind Goto. However, Goto caught White before he could attack him.

Owens attempted a package piledriver, however, Goto reversed it with a series of moves ending with a GTO, which finished the match via pinfall.

Robinson and Takagi went back and forth with quick action including a near fall. Robinson hit Takagi with a series of punches and both men hit each other with double clotheslines. Yano and Naito entered the ring with Yano immediately taking off the turnbuckle pad. Yano hit Bushi with a low blow followed by a roll up for the win.

Will Ospreay vs. Lance Archer

Archer came to the ring with a new menacing look, long red hair with the sides of his head shaved. The match kicked off the A-Block in the G1 Climax Tournament. Ospreay dove off the top rope to the outside onto Archer.

When the match returned to the ring both men quicken their pace. The match spilled to the outside and Archer chokeslammed Ospreay threw a table. Archer delivered hard chops and forearms, which blooded Ospreay’s nose. This new Archer was much quicker than his previous matches.

Ospreay attempted to turn the tide in the match with desperation punches and kicks to the head. However, Archer was not phased for long and dominated Ospreay with power bombs. Ospreay hit a spring board drop kick to take advantage in the match. Ospreay hit an Oz-Cutter to get a near fall on Archer. Ospreay hit a one-man Spanish fly off the top rope for a near fall with the crowd chanting “this is awesome!” Archer applied the Claw to pin Ospreay and win. This was Archer’s best match that I’ve seen. Kevin Kelly commented that Archer is in the best shape of his life.

The match started with great technical wrestling. Sabre Jr. started off the match working over SANADA’s arm. SANADA attempted a paradise lock but Sabre Jr. was able to work his way out of it before SANADA fully locked it in. Both men chain wrestled each other with neither man gaining an advantage.

Sabre Jr. delivered a quick strike to SANADA, which was the first strike of the match, and occurred well over 5 minutes into the match. Sabre Jr. went to the outside of the ring to break the pace of the match with the crowd booing him. SANADA attempted a paradise lock and Sabre Jr. locked in an armbar out of nowhere.

SANADA delivered a hip toss followed up with a dropkick. Sabre Jr attempted to break the momentum by going to the outside. However, SANADA followed him outside to attack him. SANADA locked in the paradise lock while Sabre Jr. was in the ropes, then released the lock with a dropkick to Sabre Jr.

Sabre Jr. applied a guillotine choke. However, SANADA reversed it with a suplex, followed by a TKO. SANADA locked in a Skull End followed by a moonsault. However, Sabre Jr. caught SANADA in a triangle choke. SANADA rolled up Sabre Jr. for a pin fall victory out of nowhere.

Both men circled each other before they locked up. Ibushi attempted strikes and KENTA evaded them. KENTA delivered a stiff kick. The match resembled a kickboxing fight with both men delivering low kicks to each other’s leg. KENTA dropped a stiff knee from the second rope. KENTA followed up with repeated hard kicks.

KENTA showed a type of fire that we haven’t seen in many years as he dominated Ibushi. Ibushi hit a quick moonsault out of nowhere for a near fall. Ibushi took advantage in the match when he was able to quicken the pace. Ibushi dove to the outside and KENTA stuck his knee out to catch Ibushi. KENTA followed up with a double stomp to the outside while Ibushi was hanging over the guard rail.

Both wrestlers received a standing ovation before they locked up. The crowd was split between both wrestlers with alternating chants of “Okada” and “Tanahashi.” Okada attempted the rain maker early in the match with Tanahashi quickly reversing it. Tanahashi delivered a jumping elbow followed by playing the air guitar.

Okada got his knees up when Tanahashi attempted the high fly flow. Okada hit the rainmaker while maintaining wrist control followed by another rain maker. Tanahashi rolled Okada up for a near fall. Okada hit a third rain maker for the win via pinfall. For the first time in the G1 climax, their match did not end in a draw.