Ultimo Dragon, the legendary Japanese cruiserweight known for his hybrid style of puroresu mixed with Mexican lucha libre, made a rare appearance for Canadian promotion SMASH Wrestling earlier this month. Ultimo was part of SMASH Wrestling’s Northern Tournament, which brought sixteen wrestlers (both male and female) together, with the ultimate goal of earning a shot at SMASH Wrestling Champion Tarik.

Ultimo was there both as a competitor and as a mentor to younger wrestlers. Before his matches, Ultimo held a seminar to provide advice and personal anecdotes from his storied career.

And his reason for coming all the way to Canada from Japan was simple yet straightforward: “SMASH has good fighters, and I came to do my best”.

Yoshihiro Asai, the man now known as Ultimo Dragon, has been wrestling virtually non-stop since his debut for New Japan Pro-Wrestling back in May of 1987. At the time, he was relegated to lower-card matches with little upward momentum and it wasn’t until he left a year later to go to Mexico that his career truly took off. 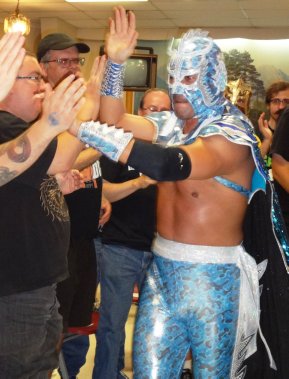 Ultimo Dragon heads to the ring at Fighting Back: Wrestling with Cancer in Ottawa. Photos by Patric Laprade.

After achieving some success in Mexico’s Universal Wrestling Association, Asai joined Consejo Mundial de Lucha Libre (CMLL) in 1991 and it was there that he donned the mask for the first time and became Ultimo Dragon. Years later, he also signed with a Japanese promotion called Wrestle Association R (WAR), through cross-promotion. That inter-promotional agreement led to some of Ultimo’s greatest matches, many of which are considered among the greatest cruiserweight matches in history.

Word soon spread of this legendary cruiserweight who knew how to wrestle in both Japanese and Mexican wrestling styles. This led to Ultimo to be signed by WCW and soon be became a fixture of WCW programming and feuded with their top cruiserweight wrestlers.

“I liked wrestling Rey Mysterio and Chris Jericho, and I also had great matches with  [Jushin] Liger and Hayabusa,” he said.

Eventually, Ultimo Dragon became an iconic cruiserweight wrestler in three different countries: Japan, Mexico, and the United States. He began collecting one championship after another and eventually became the most decorated single wrestler of all time. Between December 29th, 1996 and January 4, 1997, Ultimo was the active reigning and defending champion of ten different titles: the NWA World Middleweight Championship; the WCW Cruiserweight Championship and the J-Crown, which was a unification of eight other cruiserweight belts from multiple companies.

However, the humble Asai didn’t think much of this feat. “It was nothing special.”

With a career that has spanned over thirty years, Ultimo has managed to amass an enormous collection of partners and opponents. Apart from the aforementioned cruiserweight legends of the 1990s, Ultimo has also shared the ring with Mexican lucha libre legends like Atlantis, Blue Demon, Jr., and Dos Caras, (both Sr. and Jr., the latter also being known as Alberto Del Rio); Japanese superstars like Minoru Suzuki, Hiroshi Tanahashi and Keiji Mutoh; to stars of the past decade like ‘The American Dragon’ Bryan Danielson, Low Ki, and PAC. But out of all of these, Ultimo still has his favorite.

“My favorite opponent was Dean Malenko. We had many great matches together. Our best match was at Starrcade 1996.”

Despite beginning 1997 as the man that literally carried ten belts around simultaneously, his career took a surprise turn after a botched arm surgery caused him severe nerve damage. Believing his in-ring career to be over Asai turned to training and opened a wrestling school and promotion in Japan called Toryumon. There, Ultimo began training the next generation of stars, and taught them the same combination of lucha libre and puroresu that made him famous.

Many of his graduates have gone on to become top wrestling stars around the world. Some of his most successful trainees have included: Magnum TOKYO, Dragon Kid, and CIMA, the latter being the current president of OWE, which is the Chinese wrestling promotion closely tied to All Elite Wrestling (AEW).

Although Asai can be credited for helping several wrestlers launch their careers, none have achieved greater success than Kazuchika Okada.

“Okada was only 15 years old when I first met him. I knew there was something special in him when I saw him. I am very happy for his success. It’s a big honor for me to have trained him.”

Ultimo’s wrestling career over the past decade-and-a-half has been one of constant travel between three different wrestling regions. After a short stint in WWE, Ultimo returned to Mexico to focus on Toryumon. Meanwhile, some of his first students took the lessons Ultimo gave them and formed their own promotion: Dragon Gate. Despite having a different name, Dragon Gate still follows the same traditions passed down by Toryumon and Ultimo Dragon.

Down in Mexico, Ultimo spends his time either training new recruits or putting on his special shows. These wrestling events, called ‘Dragon Mania’ are annual events that take place in Mexico City and draw crowds of 10,000 or more on a yearly basis.