Best of the Super Jrs. Night 14: Ospreay to face Shingo Takagi in finals 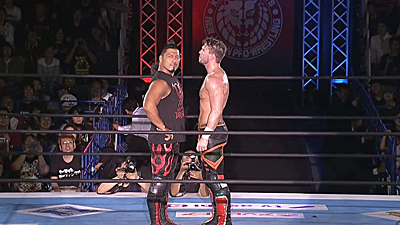 The Dragon and The Aerial Assassin will meet to determine the winner of the Best of the Super Juniors 2019 tournament this Wednesday.

The overall winner will take on Dragon Lee, the IWGP Junior Heavyweight Champion, for the title.

Ospreay defeated Ryusuke Taguchi to win B Block and cement his place in the finals.

In the B Block finals, Ospreay fought off Taguchi’s devastating ankle lock to powerbomb him to the mat. Taguchi avoided Ospreay’s OsCutter catching him and putting him in another ankle lock. Ospreay kicked out of Taguchi’s Dodon almost pinning him with a One-Man Spanish Fly. Taguchi would kick out of a Shooting Star Press but a Storm Breaker would end the match.

Shingo Takagi came out from the back to get into Ospreay’s face.

“Will Ospreay, good match. You are amazing. Technique, speed, power. You are strong but I am stronger than you!” said Takagi as he went to leave the ring. Ospreay picked up the microphone calling him back in.

“I will keep it simple. If you think for one second I am scared of you and your undefeated streak, I am not. I am not scared of you. I am only scared of one thing and that is failure, letting people down. I am scared of letting everyone here down. I love New Japan Pro Wrestling. This place I call home,” said Ospreay saying he is fighting for everyone who, like him, faces self-doubt and insecurities.

The final B Block standings are:

Another terrific match from Narita. Bushi wins with MX from the second rope.

Rocky’s leg is still bothering him. A knee strike and 24 Plex wins the match for Bandido.

Eagles finishes a great tournament for him with a loss. Someone sign Eagles already. Yoh wins with a Dragon Suplex.

Canadian ends the tournament with a win and a CR2. Phantasmo tea bags Douki. Phantasmo and Liger, who is on Japanese commentary, get into it. Liger threatens him with a chair. Phantasmo grabs Douki’s pipe swinging it at him.

Sho and Jonathan Gresham defeated Tiger Mask and Yuya Uemura. As Gresham held Tiger in the Octopus, Sho made Uemura submit to the Boston Crab.

Toa Henare and Juice Robinson beat Villain Incorporated (Brody King and Marty Scurll). A great line by Kevin Kelly as King blocks Robinson’s Left Hand of God: “Brody doesn’t believe in God.” Henare and King have a brutal exchange chopping the crap out of each other. Juice pins King with the Left Hand of God and Pulp Friction.

Los Ingobernables de Japón defeated (Tetsuya Naito and Shingo Takagi) Dragon Lee and Titan. Shingo puts Titan away with Last of the Dragon. LIJ tears off Titan and Dragon Lee’s masks throwing them into the audience. When Lee and Titan get them back, they put on each other’s masks by mistake.