In what could be a case of taking things a little too far, a fan is accusing RoH’s Bully Ray of calling in security over a war of words. 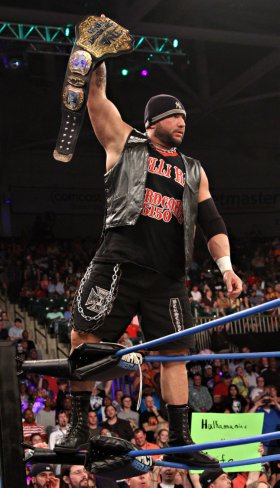 According to the fan who goes by the handle of Osh Kosh Big Josh on Twitter, he heckled Allure at a RoH house show in Portland, Oregon. He claims Mandy Leon spit on him and Velvet Sky starting insulting him in the ring challenging him to come fight her.

“She calls me a virgin. I remind her she has sex with that fat turd Bully Ray. Call them the tramp stamp trio. End segment,” Josh Tweeted.

A few minutes later, security brought Josh backstage where he was confronted by an angry Bully Ray.

“So here’s the deal. You’re done talking down to them. You need to treat them with respect. Don’t be saying anything you wouldn’t say to your mom, you got it?” is what the fan claims Bully told him before he was escourted back to his seat.

Outside of the squared circle, Velvet Sky and Ray are a couple, romantically involved.

Ring of Honor is investigating the incident and issued this statement.

“ROH has always taken fan-first approach, with fan experience being at the forefront of all of our live events. We consider this to be very serious and will be conducting an internal review over the next 48 hours to determine the appropriate actions.”