At only 22 years of age, Austin Theory has conquered EVOLVE Wrestling. A former WWN Champion, FIP champion, and the current EVOLVE champion, Theory is touring the world and proving why he’s the best on the roster.

In 2015, Austin Theory wasn’t even a trained wrestler yet — he was winning the Teen Men NPC Georgia Bodybuilding Championship when he was 17. It was only after this achievement when Theory started the road to his lifelong dream. Training under Lucha Underground and EVOLVE’s Dante/AR Fox, Theory made his pro wrestling debut in 2016 and has since performed in companies such as Progress, FIP, EVOLVE, and has even had an Axxess match for WWE. He was involved in a WWE Performance Center tryout early last year, which is a good indicator of where his future will lead him.

Here is my interview with Austin Theory just a few hours before EVOLVE 127 in Livonia, Mich.

With EVOLVE’s new partnership with WWE, many NXT superstars have been prominently used on EVOLVE’s cards. How would you say this affects you and EVOLVE’s product?

It’s actually great. It’s not only good for me, it’s good for everybody here. Just like, us getting that exposure and that different side of what we’ve learned, but also learning what they learn up in NXT and WWE and stuff like that. But yeah, it’s just positive for everybody.

You’ve previously won the WWN championship, FIP championship, and are currently the EVOLVE champion. What other goals are you looking to achieve during your time with EVOLVE?

Just to prove that I’m the best here. Like, starting off and people not knowing who I am — I mean, obviously I was early into my career when I got here — but yeah, just letting people know and remember who Austin Theory is. 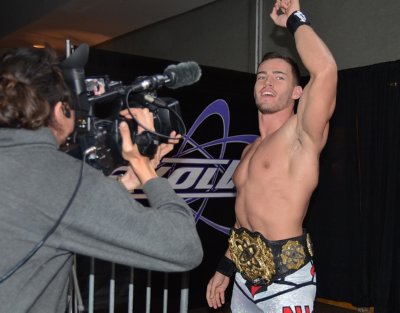 Austin Theory heads to the ring — after posing — at an EVOLVE show in May 2019 in Livonia, Mich. Photos by Brad McFarlin

You’ve been a lifelong wrestling fan, but what inspired you to get into bodybuilding?

So, a lot of people think that, “Oh, I guess bodybuilding didn’t work out for you, so you decided to be a wrestler,” but that’s not true at all. I did bodybuilding because I had a friend — he’s a professional bodybuilder — and he’s not really too into wrestling, but he told me he placed first in a show, and there were some WWE scouts there, and they offered him a tryout. I don’t think he took it, but me — I was 17 at the time, and like my whole life goal has always been to get to WWE — once I heard about that I was like, “Oh man, I should just do a bodybuilding show, and if I win first place I can get a WWE tryout.” So that was the plan, I did it, and I didn’t get a tryout.

Describe your transition process from bodybuilding to pro wrestling training with AR Fox.

So like, I still do my bodybuilding training every day. That’s how I stay in shape and stuff like that, but actual in-ring training, you’re not going to get that at a gym lifting weights. You have to be in the ring because there’s no cardio like wrestling cardio. I’ve heard a lot of people say that and it’s absolutely true. You know, being on a treadmill or some kind of cardio machine that a gym has, it’s nothing like the ring. And just training with AR Fox is crazy, but it will definitely get you ready for anything.

Would you say that AR Fox being on the same roster as you was beneficial to your success?

Absolutely. Just having him… it made me comfortable too. Just starting off in EVOLVE, that’s kind of when Fox wasn’t around. I always had him when I did certain shows, because he offered, “Hey, you want to go to this show? Just jump in the car,” and I would. But yeah, when I first started at EVOLVE, he wasn’t here. But now that he’s here it’s cool, it’s like — you know because that’s my trainer — and any time there’s a question, or a concern, or just anything like that I can just go to him.

You’ve said that WWE is your dream company, but are you open to looking elsewhere after EVOLVE?

I would just say that I love wrestling, and wherever wrestling is I’m interested in going. But WWE is definitely the goal… but you know I really like everything that’s going on right now in wrestling. Because you know, growing up and as you get older, there’s not so much like “wrestling fans.” Like when you get to high school it’s not cool anymore. But it’s real cool to see it growing, and there’s more people, and there’s more companies. So I just think that it’s all great.

The next EVOLVE shows are in Queens, NY, on June 29, and and Brooklyn, NY, on June 30th. Visit the EVOLVE website for more info. 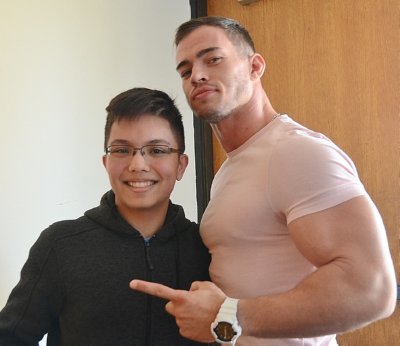