What does everybody want? Al Snow’s autobiography!

The way I see it, Al Snow owes me $100 for this review of his new autobiography, Self Help: Life Lessons from the Bizarre Wrestling Career of Al Snow. Not as a bribe or anything for a positive review. Rather, that’s what it cost me when I had to pay a no-show fee to the dentist because I slept in and missed an appointment, after not being able to put his book down the night before.

That’s because Self Help is, simply, a terrific read. Co-written with author Ross Owen Williams (who also co-penned the autobiography with “Hardcore” Bob Holly), the book documents Snow’s life and career in a way that entertains, educates, and enthralls. 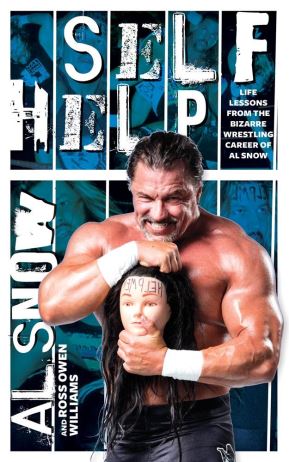 Over the course of 304 pages, Snow writes about his evolution from young fan to global superstar, and every step in between. The tone is conversational — and if you’ve ever had the chance to meet Al Snow, or watch/listen to an interview with him — you’ll know how interesting that can be. He easily flows from topic to topic, telling stories, but also imparting the wisdom he gained from each experience.

The first quarter of the book is devoted to Snow’s early days, including tales from his training (featuring a rough story about being in the ring with Ole and Gene Anderson) and his travels on the independent scene, where he earned a reputation as one of “wrestling’s best kept secrets.”

From there, he goes into his initial WWE stint, which by his own admission was far from stellar. Between recounting his experiences as Avatar and Leif Cassidy, he also tells humourous tales of life on the road, backstage ribs — indeed, those kinds of anecdotes are scattered throughout the book, and never get tiresome.

From there, he talks about he pushed ahead (pun intended) to reinvent himself in ECW before returning back to WWE. The lion’s share of the book is dedicated to this portion of his career, and he holds nothing back in talking about his teaming with Mick Foley (though, he doesn’t get any payback at Foley, who took a number of good-natured jabs at Snow in his first book), WWE’s Hardcore division, his dog of a feud (again, pun intended) with the Big Boss Man, and his teaming up with Steve Blackman. Here, again, Snow pulls no punches in dishing out his view of the good, the bad, and the ugly that went on.

He also devotes a lot of ink to his time as a coach on WWE’s Tough Enough reality series, and in the OVW developmental territory. Snow’s memories as the resident “father” of the students under his charge reinforce his passion for the business and how protective he is of both wrestling and wrestlers, and his perspective on both is truly interesting.

Snow touches on his post-WWE career, including his time in the independents — and he is still very active today — to his time as an executive in TNA Wrestling, and even acting in feature films. Unfortunately, the book ends before Snow can discuss the formation of his Al Snow Wrestling Academy or his wildly-popular Collar X Elbow Apparel company, although one could argue those may be better-suited for a business book, should he decide to write about those ventures at some point in the future.

And, given how good Self Help is, I can predict that one will be must-read as well.