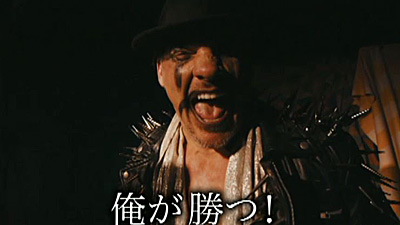 Chris Jericho has reappeared in NJPW despite having signed on with AEW.

Just as IWGP Heavyweight Champion Okada was addressing the crowd after he defeated challenger Sanada the lights went off in the arena and a video played.

Playing lullaby music in the background, the video showed Chris Jericho applying his dark clown make-up backstage at a circus or carnival of some sort.

Another Canadian, El Phantasmo (Government name: Riley Vigier), made his NJPW debut on the card teaming with fellow Bullet Club member Taiji Ishimori against Will Ospreay and Dragon Lee. Phantasmo and his high flying, daredevil style won the match for his team with a modified facebuster.

You didn’t need a fortune teller’s crystal ball to predict the main event of night two of Wrestling Dontaku.

No offense to Sanada, who is one of NJPW’s most gifted athletes, but the conclusion of his IWGP Heavyweight title match against champ Kazuchika Okada, was a no-brainer. As talented as he is, Sanada is not being groomed to be the face of NJPS wrestling at the present time.

Except for a few bright spots during the tour, the 38 minute match symbolized the entire Dontaku 2019 tour which was flat and predictable.

Sanada came to the ring with a new metallic mask, jacket which kinda looked like Taichi’s, and his hair flat, no mohawk.

When the bell rang the crowd was firmly on Okada’s side cheering his name loudly.

The start of the match was slow and methodical with a lot of mat wrestling, cautious lock-ups. The tone wouldn’t change much throughout the bout.

Sanada took exception to Okada taunting him in the ropes. He booted him in the abdomen throwing Okada into the ropes.

Okada bounced back with a boot to the face and a sliding kick to the head.

Okada fought off the Paradise Lock twice. The third time was the charm though. With Okada locked up and unable to move, Sanada casually walked around the ring playing to the crowd.

Okada whipped Sanada into the steel barricade, knocking him over it with a boot to the face. Okada sprinted the length of the ring, dove over the barricade and onto Sanada knocking him into another barricade and some seats. Okada held his knee after the move, limping back to the ring with Sanada in tow.

In the final minutes, Sanada and Okada traded forearms in the middle of the ring as the crowd continued to support Okada. A crushing uppercut from Sanada brought Okada to his knees. A shotgun drop kick from Okada had Sanada flat on his back as Okada waited to strike. As Sanada locked on Skull End, Okada walked the turnbuckle to flip over Sanada putting his own version of Skull End on. Sanada clocked Okada with a Rainmaker. Just before the three count Okada kicked out. Spinning Tombstone Piledriver and a Rainmaker Clothesline ended Sanada’s title hopes.

Earlier in the evening, Hiroshi Tanahashi, recovering from elbow surgery, announced that he will be returning at Dominion as well. He also told the audience he has his eyes set on the IWGP Heavyweight Championship. An angry Jay White interrupted Tanahashi’s announcement.

“You are all the way at the back of the line, even behind Goto. I am the real champion and it doesn’t matter who wins tonight. I am next in line!” said White.

White and Goto attacked Tanahashi, focusing on his elbow.

“Send him back (to hospital)!,” shouted Gedo as White put Tanahashi’s arm in a chair ready to re-injure it. Young Lions saved Tanahashi pulling him out of the ring.

Los Ingobernables de Japón (Shingo Takagi, Bushi and Tetsuya Naito) beat Sho, Yoh and Kota Ibushi. Naito pinned Yoh with Destino. Naito apologizes to the crowd for there not being an IWGP Intercontinental Championship match tonight…but perhaps the belt will be on the line at Dominion? Ibushi agreed.

Tomohiro Ishii defeated Evil in a punishing match with his Brain Buster finisher.