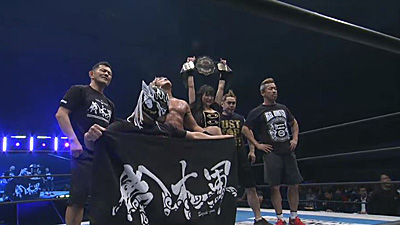 On the first night of NJPW’s Wrestling Dontaku Taichi became the NEVER Openweight Champion for the second time while Dragon Lee retained his IWGP Junior Heavyweight Championship for the first time.

At the start of the NEVER Openweight Championship match, Taichi received far more support than Cobb does from the fans in Fukuoka. In Taichi’s corner were not only his valet Miho Abe but also Suzuki-gun members Taka Michinoku, and Yoshinobu Kanemaru, for some odd reason.

Taichi killed some time asking Miho to make sure his hair was just right before he took a stroll around the ring.

Miho climbed up on the ring apron. The official and Cobb demanded that she get back down on the floor. Taichi clobbered Cobb from behind but Cobb no sold the sneak attack.

Taichi and Miho distracted the official as Kanemaru pummeled Cobb. Cobb reversed things hurling Kanemaru into the steel ring barrier. Taichi caught Cobb in the throat with his microphone stand as he turned around to face him. While Cobb was stunned Taichi choked him out with the stand.

Taichi slammed Cobb’s head into the announce desk and choked him with a microphone cord. Taichi went back into the ring holding up the NEVER Openweight Championship.

Cobb Superplexed Taichi to the mat from the second rope. Taichi would battle back putting Cobb in the Stretch Plumb submission move. Cobb would escape. Cobb gut-wrench suplexed Taichi twice before lifting him up into a jumping piledriver. Taichi survived to super kick and Black Mephisto Cobb to win the title.

This is Taichi’s second reign as NEVER Openweight Champion.

In their match for the IWGP Junior Heavyweight Championship it looked like Dragon Lee was going to go down to defeat when Taiji Ishimori hit him with a Canadian Destroyer. The power of the move bounced Lee into the ropes. Lee ricocheted off spiking Ishimori with a Falcon Arrow. Lee followed up with a double stomp from the top rope into Ishimori’s chest. Ishimori kicked out.

Lee squirmed out of Ishimori’s Yes Lock and kicked out of a gutbuster. Ishimori was eventually pinned with Dragon Lee’s Desnucadora, verticle suplex powerbomb.

Tomorrow on Night Two, Kazuchika Okada will put the IWGP Heavyweight Championship on the line against challenger Sanada.

Suzuki-gun (Taka Michinoku, El Desperado, Yoshinobu Kanemaru and Minoru Suzuki) defeated Ryusuke Taguchi, Tiger Mask, Jyushin Thunder Liger and Yoshi-Hashi. Taka pinned Tiger Mask with the Michinoku Driver. Suzuki and Liger lifted chairs from the crowd and threatened each other. When things ended in a stalemate Liger slammed his down on the ground. Suzuki threw his at a Young Lion. Tiger Mask appeared to be limping back to the locker room.

Sho, Yoh and Kota Ibushi defeated Los Ingobernables de Japón (Shingo Takagi, Bushi and Tetsuya Naito). Ibushi pinned Bushi with the Kamigoye. Ibushi demanded to know when Naito would fight him for the title. Naito refused to give Ibushi a date. Ibushi replied that he is happy to wait.