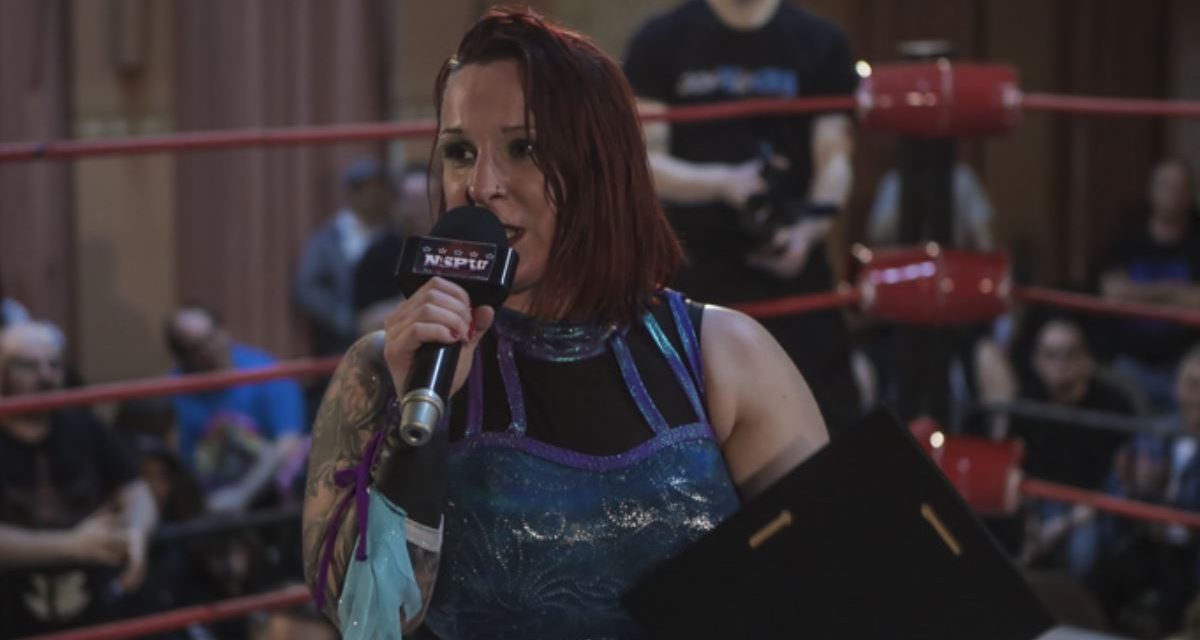 QUEBEC CITY – Saturday night’s Femmes Fatales card was a tribute to those who paved the way for the younger generation to live their dreams of being in the squared circle. LuFisto is one of those women, and last night was the Wounded Owl’s last match in Quebec City. An unexpected surprise awaited her, and her reaction was priceless. 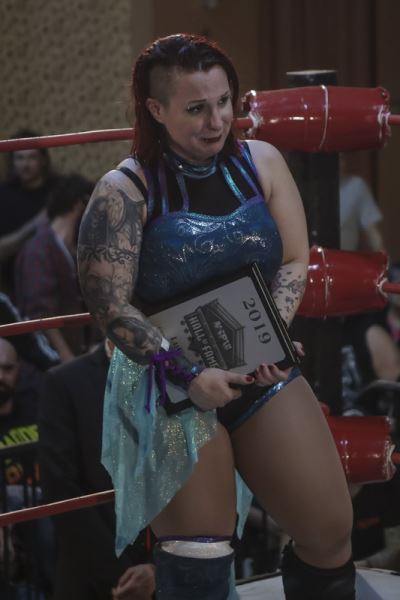 LuFisto, in tears, at the end of Femmes Fatales 22. Photos by Francis Vachon

Her opponent was another trailblazer in women’s wrestling, Cheerleader Melissa. This was a main event that Femmes Fatales had seen before. These two had come face to face with each other years ago when the promotion first began, partly under the stewardship of LuFisto (Gen Goulet), when they clashed in the very first main event. Both grapplers came for a fight, but the crowd clearly favored their quasi-hometown girl LuFisto. Once the match got underway it wasn’t long before both of the women were throwing each other around the ring with that intensity that they are both known for. But of course, it wouldn’t be a typical Femmes Fatales match if they crowd wasn’t involved, literally.

LuFisto and Cheerleader Melissa escalated the battle by making their way into the audience and onto the main stage of the Centre Horizon venue. The Wounded Owl threw Melissa off of the stage, which landed her into the crowd. Once they made their way around the ring, both women got back in and wacked each other with metal chairs that were left under the ring. Beaten, battered and bruised, they each fought until they couldn’t stand. The Quebecer, however, came out victorious with a look of content and control. It was evident that she was trying not to react to their crowd aggressively chanting her name. 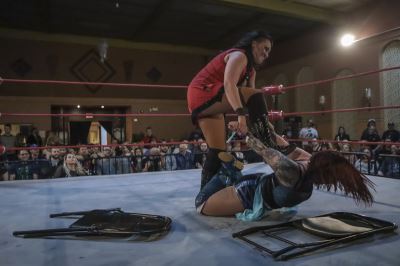 The violent bout between Cheerleader Melissa and LuFisto.

Cheers, screams and clapping filled the room as the rest of the roster of last night’s show each took a spot around the ring and chanted “LuFisto” while slamming their hands on the mat. It wasn’t long before promoters Michael Style and Pat Laprade took center stage, both with a microphone in hand. Although both had some very complimentary things to stay about LuFisto, it was Laprade’s praise that gave everyone goose bumps.

“I said she paved the way for a number of women’s wrestlers, here in Quebec, but also throughout North America,” said Laprade in French. He praised LuFisto for co-founding Femmes Fatales in 2009, following the province’s first all-women promotion, ALF. It was her influence that brought to stars like Cheerleader Melissa and Mercedes Martinez into Quebec.

Fans were so loud that he had to stop speaking every few seconds so he could give her the highest praise. “You are without a doubt, the best female wrestler in Quebec history, and that’s coming from a historian like myself.” Quite the mic-drop moment.

Up next, Stephane Bruyere, the co-founder of Femmes Fatales and former booker of North Shore Pro Wrestling, appeared in the center of the ring. He carried a surprise for his former partner. Michael Style talked, telling the crowd how much LuFisto had done for women’s wrestling. “We would like to present you with this plaque and formally induct you into the NSPW hall of fame,” he said. The crowd exploded in cheers as LuFisto beamed and finally let us see the emotion she was hiding earlier. Finally, the star of the night grabbed a microphone for her acceptance speech.

“All I ever wanted to do was be a wrestler and prove that we can be just as good as the men, or better,” she began. Again, she had to stop talking and let the crowd chant and cheer for her. It was a moment of glory for the woman who has entertained fans for all these years. “I may not have made it as far as others, but I am proud of my friends who have.”

Lastly, she wanted each and everyone to know that she has appreciated the support over the years. “I want you to know that I see every email, every Facebook message and it’s you guys that kept me going for so long.”

Those final words sparked a standing ovation before LuFisto left the Femmes Fatales ring, likely for the last time as an active competitor. The crowd kept chanting her name even when she was long gone. 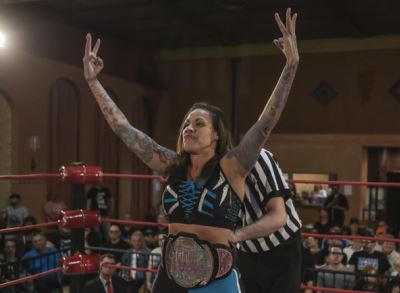 The Femmes Fatales championship did change hands as well. With Vanessa Kraven relinquishing her title due to a broken leg, it was a fight between Mercedes Martinez and “The Alien” Kris Stratlander for the hardware. Martinez came out on top as the new champ and was proudly wearing the belt for the third time. 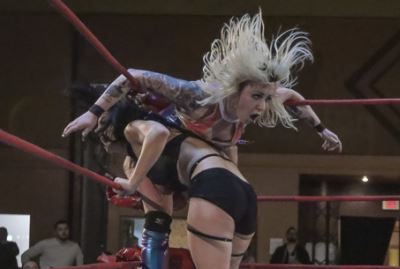 Priscilla Kelly knocks the air out of Kimber Lee.