Kris Stadtlander: The Alien in and out of the ring

If you ask most wrestlers why they decided to pursue a career in the squared circle, they will probably recount a story from their childhood when they were watching their favorite character on television. They may have had an epiphany when they attended a local wrestling show and were electrified by the energy in the crowd. However, this is not the case for “The Alien” Kris Stadtlander.

She is no ordinary female wrestler. Her in-ring gear includes a space-like attire and galaxy-inspired face paint. For most, if not all of her matches, she has a line of small dots outlining the top of her eyes and war stripes on her cheeks. Statlander definitely stands out from the crowd with her high-flying moves, but she didn’t learn them from watching wrestlers on TV when she was younger. 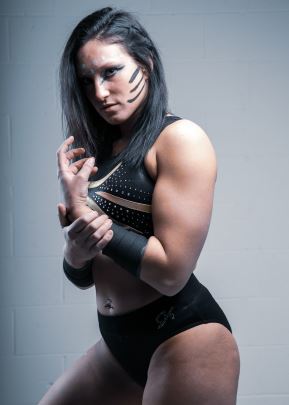 No, Stadtlander was not an avid wrestling fan growing up. Her passion for the sport came later on in life, in an unexpected way. “I didn’t watch wrestling until I started training,” said Stadtlander. She wasn’t actually training to become a wrestler, either. She has originally worked as a stunt double when she was introduced to world of grappling.

“I had a friend who was a wrestler and she kind of brought me into it. They wanted to see if they could use me as a valet or a manger,” Stadtlander told SLAM! Wrestling. It was only when she saw others performing in the ring that Stadtlander made the decision to try it out. “Just watching it from the sides inspired me to get in there and start doing it myself.” The next step was in enroll in a wrestling school, where she made another big achievement.

The New York native attended Create A Pro Wrestling Academy, a local training center and promotion in Hicksville, New York. WWE Superstar Kurt Hawkins and Pat Buck started this promotion. She became the first woman to graduate from the school. “I saw so many people come and go there, both men and women. To be the first [woman] to stick it out and make it through, was very special to me,” she said. Stadtlander added that she had a great support system while she was at CPW Academy, a big reason why she made it to the end. “They made sure I was getting everything I could get from this experience. Overall, it was just a really great accomplishment for me.”

Anything that’s worth having comes with some challenges, however. Stadtlander had her own share of them while attending this school. “I was always really hard on myself, which was a huge struggle for me. I just wanted to be successful and be the best that I could be,” she said. Stadtlander revealed that she felt like she finally found a place where she could be herself. “When I found something that I was good at, things were clicking and that’s what drove me to be better.” 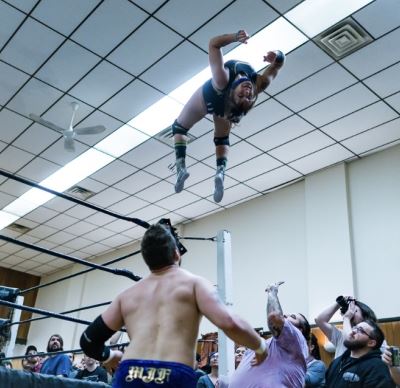 The Alien in outer space.

Throughout her life, Stadtlander felt she couldn’t always be herself and knew she was not like the others. This was part of the inspiration behind her in-ring persona, The Alien. “They say in wrestling that one of the best versions of yourself is to be a played-up version of your own personality,” she continued, “aliens are unknown creatures, they don’t really know what they are and you’re curious the learn more about them.” She explained that this is how she is in real life because she felt like she doesn’t fit into any category and is definitely in a league of her own.

Stadtlander has been success in her own right, winning three championships that she is very proud of.

Pat Laprade, one of the organizers for Femmes Fatales 22, knew she would have much success once she got her feet wet in the business. “There are wrestlers you see for the first time and right away, you know they will go places,” he continued, “I said the same about others like Paige, Adam Cole, Apollo Crews, and Quebec’s own Kevin Owens. Kris Statlander is without a doubt part of that group.” 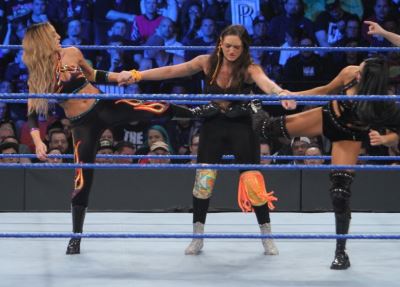 Kris Stadtlander is double teamed by the The IIconics on Smackdown. Photo by George Tahinos

Though it wasn’t a starring role, Stadtlander was half of “The Brooklyn Belles” who were beaten down by the new WWE women’s tag team champions, The IIconics, on Smackdown! Live on April 9th. “It was such a cool experience. I’m not from Brooklyn but I am from New York so it felt kind of like home for me.” Although she was thrilled to be there, the WWE may not be her ultimate destination.

Stadtlander said that she doesn’t have any set goals right now and that she wants to see where wrestling takes her, wherever that may be. “I don’t know if it’s my goal to be there just yet,” she said.

For more on Femmes Fatales 22, see its Facebook page.