Hallowicked serves as a ‘gold standard’ in CHIKARA

When a future CHIKARA mainstay was ready for his first match, the company’s founder, Mike Quackenbush, gave him a mask, his name and simply said, “You do what you want with it.”

And thus, Hallowicked was born (noticeably without the ability to speak).

Over the course of his career, the supernatural-inspired character has wrestled predominantly in CHIKARA, with stints in Ring of Honor, Dragon Gate and EVOLVE, among others. But the origin of the character itself, according to Quackenbush, has always been that of an “entry point to the supernatural.”

“A lot of characters I was attracted to in my early fandom served this purpose, like Papa Shango and the Undertaker,” Quackenbush said. “I think having elements of fantasy, science fiction and other genres of storytelling loose in the sometimes-overly-serious world of pro-wrestling makes for great fun.” 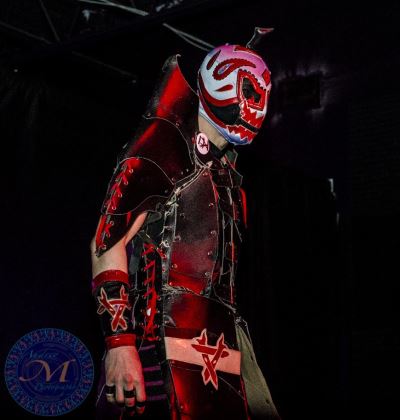 Hallowicked at a Journey Pro event on March 28 at Kanza Hall in Overland Park, Kan., where he faced Jeremy Wyatt. Photos by Audrey M Photography.

Though he has been in the ring for nearly 20 years, it wasn’t until more than halfway through his career that Hallowicked actually began to talk. He spent many years spouting incoherent babble.

“Originally, Hallowicked did not speak,” Hallowicked said last month during a rare Midwest appearance with Journey Pro in Overland Park, Kan. “Just gibberish, gibberish, gibberish. And I think I did that for about 12 years. One day Quackenbush just said, ‘Hey, what do you think about if you start talking?’ I said, ‘Hey, it’s getting kind of stale after 12 years, maybe we can try something different.'”

That incoherent non-speak came “so easy” to the veteran, as he didn’t have to generate responses on the fly.

“If someone in the crowd yells something at me, I don’t have to have a witty response,” Hallowicked said. “It was a crutch, really.”

Still, removing that crutch was a more natural transition than he expected.

“I was a little resistant to it at first, I didn’t — like I said, I was leaning on this crutch for so many years, but [it was] a new challenge and I really enjoy doing it.”

When Quackenbush approached Hallowicked about introducing speech into the character, the CHIKARA founder said it was important to him that Hallowicked also support the idea.

“Hallowicked has been with me for the better part of 20 years,” Quackenbush said. “I hold him in the very highest regard. There are some characters and performers I would not seek the approval of before making such a decision. There’s a reason talent is not usually part of the writing process. However, Hallowicked is a very special case. His dedication and loyalty put him in a select class that comes with a certain esteem and prestige.” 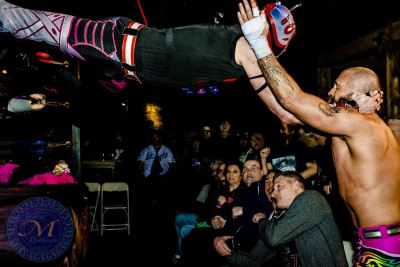 “He’s a utility player, like Phil Hartman was to his SNL cast,” Quackenbush said. “You put Hallowicked into any scenario, it’s instantly better.”

“I love the style [at CHIKARA],” Hallowicked said. “I love all the guys there. They’re like family to me. I hate most of their guts, but just like your family — you probably hate ’em, but you love them.”

Being trained by Quackenbush meant “absolutely everything” to Hallowicked.

“[There’s] no chance I’d be in wrestling right now if I had stuck with those guys teaching us at first,” Hallowicked said. “I would be long retired.”

Those words from one of Quackenbush’s first trainees give him a “great swell of pride.”

“When I started The Wrestle Factory, I was not a good teacher nor a good mentor,” Quackenbush said. “It took me a long time to grow into those shoes. And it’s easy to look back at those humble beginnings with a certain degree of contempt. I find it quite edifying to know he regards his time as my student in that way.”

Early in the masked man’s career, Quackenbush also bestowed Hallowicked with the honor of winning the inaugural Young Lions Cup, a CHIKARA-based contest for up-and-coming wrestlers. In the years that followed, the likes of Larry Sweeney, Chuck Taylor, Arik Cannon and Heidi Lovelace (WWE’s Ruby Riott) would also hold the cup.

“It’s an endorsement,” Quackenbush said. “It’s a vote of confidence. I believed in his ability then, as much as I did 10 years later, as much as I do now. There isn’t a wrestler anywhere in the world that I’d hesitate to match up against Hallowicked. He can hang with anyone. He’s our gold standard.” 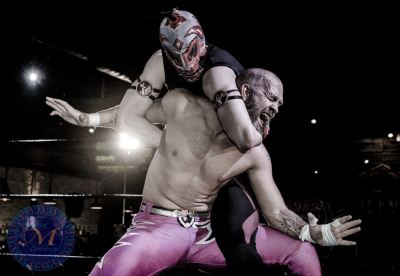 Hallowicked at a Journey Pro event on March 28 at Kanza Hall in Overland Park, Kan., where he faced Jeremy Wyatt. Photos by Audrey M Photography.

That accolade is something Hallowicked wears with pride to this day.

“It was 16, 17 years ago [that I won the Young Lions Cup],” Hallowicked said. “[It was] a huge accomplishment for Mike to think that much of me, that early in my career and to put that on me. I’m very proud of that.”

And still, the cup itself holds significance for its inaugural winner.

“Anytime I see one of our newer guys win that, I know exactly how they feel about it,” Hallowicked said. “I hope they feel the same way I did. And I hope they’re taking that ball and they run with it.”

The man himself has had a hand in training the newest crop of talent out of The Wrestle Factory. Hallowicked said that the quality of students now is “higher than it’s ever been.”

“We only had Mike teaching us [when I started], so it would take years for us to develop where we’d be anywhere where we should even be in a ring,” said Hallowicked, also a graduate of the Factory. “But these new guys, they’re there for a couple months and it seems like they’re better than us already.”

He has been training others since 2012, and transitioned to that role because of the number of students at The Wrestle Factory.

“Mike was the only one training there because Cesaro had left for WWE, and he said we need some guys to step in and become trainers,” Hallowicked said. “And again, [it was a] different kind of challenge, and I wanted to give it a shot. And I love it.”

It was a little “strange” at first, he said, in moving from a “peer relationship” to the student-teacher dynamic. But the “entire crop” of CHIKARA graduates have all been through Hallowicked’s training.

“And the next crop that’s coming out after them is going to be even better,” Hallowicked said.

Hallowicked, according to Quackenbush, understands Quackenbush’s vision for professional wrestling.

“I can count on him to convey that to everyone that comes up in our system,” Quackenbush said. “If a day came that I could no longer train prospects, I could hand him the keys and know with confidence the job would be done in a way that would make me proud.”

As he continues in the wrestling world, Hallowicked has joked that he wants to train a student at The Wrestle Factory who was born after he began his own career.

“I’m actually getting very close to that,” Hallowicked said. “A couple years, I think it’s going to happen. I just want to keep putting out these guys who know what they’re doing, can take care of their opponents and can just come into any spot on any show and they’re going to shine.”

For more information about CHIKARA and the Wrestle Factory, visit the CHIKARA website.