During the Attitude Era, the risque antics of Degeneration X helped make professional wrestling the hottest thing on TV. The edgy humour, the “F the rules” mentality, and the thought that anything could happen when they were on the mic made DX must-see. Well, time has passed, but the group proved, during their induction into the WWE Hall of Fame on Saturday night, that they’ve still got it. 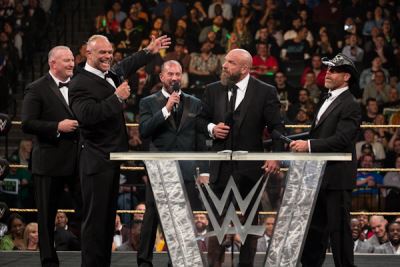 DX ending the night at the WWE Hall of Fame inductions. Photos by Ricky Havlik, RickyHavlik.com

The ceremony, which aired on the WWE Network, is a key event during the annual WrestleMania weekend. Like other entertainment awards, this one was preceded by the red carpet hype show. TV personality Maria Menounos joined WWE announcers/interviewers Byron Saxton, Charly Caruso, and Kayla Braxton in interviewing the superstars and legends and their families on their way into the show, which took place at the Barclays Center in Brooklyn, NY. While it was interesting to hear the superstars speak (mainly) out of character, there were very few other true highlights from the hour-long pre-show, notably: Kalisto and his wife dressed to the nines while also wearing lucha masks; and Paige’s barely-there outfit – shoo-wee-mama!

Luckily, the ceremony itself had a number of highlights, including the opening video, made interesting by DX hijacking the voice-over, harking back to their more rebellious days.

Renee Young and Corey Graves acted as the emcees for the night, pointing out a major change to the event this year, that saw the inductions taking place in a ring set up in the middle of the arena, versus a more traditional stage setup. Though, given one particularly unfortunate event may make them rethink that layout in the future.

The Honky Tonk Man, the greatest Intercontinental Champion of all time, was first up. Hall of Famer Jimmy “Mouth of the South” Hart inducted Honky, with a fairly quick introduction that went through their history together. Honky’s speech was quite upbeat, and his attitude was one of gratitude throughout. He talked about the genesis of the character – including having picked the name after hearing it referenced in a song lyric – and honing the character while working in Calgary. He thanked Hulk Hogan for recommending him to WWE, and WWE for giving him the opportunity to giving the character a global platform. His speech ended with him singing his theme song with the WWE Universe. And with that, the Honky Tonk Man has left the building.

The lovely and talented Stacy Kiebler returned to WWE after 13 years to induct her friend and sometimes tag team partner Torrie Wilson. Stacy talked about the Women’s Revolution and how Torrie embodies all of the qualities that it represents. Torrie, who looked as radiant as always, told an empowering story about her journey from shy, chubby schoolgirl to a fearless, confident superwoman. She gave what was effectively a motivational speech, challenging everyone to find and own their confidence. She thanked, particularly, Kevin Nash and Hulk Hogan for giving her the opportunity to become a wrestler, Fit Finlay for teaching her how to be one, and her ex-husband Billy Kidman for teaching her how to survive the industry. Many of her fellow “Divas”, as they were known back then, were also thanked and shown in attendance as she listed them. During her speech, she noted how difficult this week had been, and she explained that her father, Al Wilson – who had some memorable comic moments on WWE TV himself back in the day – passed away two days ago, adding even more poignancy to her comments.

One of the most emotional moments of the night, the induction for the Hart Foundation – Bret “Hitman” Hart and Jim “the Anvil” Neidhart – was marred by the idiotic actions of a fan who attacked Hart during the speech he was giving along with WWE superstar Natalya, Neidhart’s daughter. After an emotional speech, in which she shared details of her last text conversation with him before he passed away last year, Natalya had just turned the mic over to Bret. Bret was both touching and funny when talking about Neidhart, and was sharing a story about how the team was originally put together, when the attack happened. On TV, the fan could be seen in the ring behind Bret, and then the cameras abruptly cut away. When they cut back, a number of wrestlers were in the ring checking on Bret and Natayla, and police and security were shown removing the intruder from the building. Bret resumed his speech after that, noting the contributions of Jimmy Hart and “Dangerous” Danny Davis in the success of the team, and also naming numerous tag teams that he and Neidhart wrestled, crediting them for helping build their legacy. He ended his speech noting that he was proud of the team’s accomplishments, but noting that even more, he was proud of the fact that through it all, they never lost their friendship for one another.

In many years, there have been inductees that some consider to be somewhat dubious. This year, that label was given by many critics to Brutus “the Barber” Beefcake, with the most cynical comment being that Beefcake’s induction was merely pretence to have Hulk Hogan appear at the event. What was notable about Hogan’s introduction was that the New Day, who had been clowning around and acting very festively for most of the evening, sat there stone-faced while Hogan spoke; some wounds don’t heal easily, it would seem. Beefcake’s speech was a bit stilted – a joke about him being responsible for Shawn Michaels’ baldness earned crickets – and at times seemed to be a love letter to his friend Hogan, but overall it was fine and thankfully not too long.

WWE’s in-house angel – Sue Atchison, who is responsible for co-ordinating all of WWE’s Make-A-Wish efforts – rightfully was named as this year’s winner of the Warrior Award. During the red carpet show, Braun Strowman had noted that Sue had been given a presentation at an event earlier this weekend with a jar of 6,300 hearts – one for each wish she had arranged between a WWE superstar and an ailing child. So it was fitting that she be the first WWE employee to receive the award, whose namesake – the Ultimate Warrior – suggested be given to the unsung WWE employees that do so much behind the scenes. Warrior’s widow Dana made a quick speech, but then introduced a fellow Make-A-Wish superstar in his own right, John Cena to talk about and introduce Sue. Her speech was, characteristically, more about other people, as she gave special mention to the special children whose wishes she got to grant – including Connor “the Crusher”, a former wish kid who was in the crowd, and the various WWE superstars who granted the wishes, including Cena. She also outed Justin Bieber as a real-life heel, having falsely tried to claim status as the top wish-granter of all time. The speech was heartwarming, and the honour well-deserved.

WCW tag team legends Harlem Heat (Booker T and Stevie Ray) were inducted next. Booker T spent a few minutes talking about how much Stevie Ray meant to him throughout his life, including getting him into the wrestling business. Stevie Ray then chronicled the history of the team, including their false starts in the business before earning a reputation as the Ebony Exprience in Houston, and then ultimately to WCW. They said how they struggled initially until Hulk Hogan endorsed them as the best team in the company, at which point they got their opportunity. They gave credit to Sherri Martel for helping elevate them (and, in some ways, sparking the women’s evolution), to Arn Anderson for teaching them the ropes. They ended the speech by giving props to many of the younger teams on the roster, with special mention to KofI Kingston, including Booker T dissing Kingston’s Mania opponent, Daniel Bryan.

And then it was time for the main event: the induction of Degeneration X. The five surviving members of the group – Triple H, Shawn Michaels, “Road Dogg” Jesse James, “Bad Ass” Billy Gunn, and Sean “X-Pac” Waltman – came to the ring on an army vehicle, paying homage back to the classic DX moment when they invaded WCW back in the day. The five long-time friends looked like they were having a ball on stage in each other’s company, and their fun energy seemed to bring the energy up in the entire building.

Their segment was a perfect mix of humour and heart, with genuinely emotional moments being sprinkled with the occasional d*** joke. They started of by poking fun at the backstage rule that inductees should not thank Vince McMahon, spurring the crowd into doing exactly that. There was also a couple of great insider knocks on All Elite Wrestling, which they didn’t mention by name, but the jokes weren’t lost on the crowd. Things got serious when they recognized the contributions of Chyna to the success of the group. And then each member had a chance to make individual comments.

James made some very emotional comments to his wife, and followed that up with a video package that ended with a doggy-style money shot. Gunn thanked a few legends, including the Harris Brothers and Bill DeMott before getting emotional talking about his wife. X-Pac noted how he doubted he would even be alive before he would ever get inducted, and he teared up talking about how hard he worked to gain his family back after a life of ups and downs. He thanked a number of people, including his inspirations Ric Flair and Dusty Rhodes, the Malenko family, ECW original Jerry Lynn, fellow Kliq members Scott “Razor Ramon” Hall and Kevin Nash, Bret Hart, and Chyna. Which he followed up with jokes about boobs and in particular, granny boobs. HBK had a quick moment of levity where he feigned outrage that his family didn’t attend, before ceding the mic to Triple H. Trips thanked his trainer Killer Kowalski, and then everyone who paved the way for him and worked with him. He thanked the Kliq and D-X, and noted that their success came out of trying to make each other laugh. He gave particular mention to Chyna, and linked her impact on the business with the fact that women will be main-eventing on Sunday. The segment ended with them hauling out a custom DX podium, paying tribute to their (in)famous “state of the union” video, in order to deliver an apology for corrupting a generation of wrestling fans. However, this turned out to be simply a setup for them to of their most famous catchphrases, much to the delight of the fans, who boisterously chanted along with each of them, ending in resounding “Suck It!” to end their speech, and the night.