There’s a lot of wrestling around New York City and New Jersey this weekend, but Jeff Cobb, who’s on Saturday’s G1 Supercard event put on by New Japan Pro-Wrestling and Ring of Honor at a sold-out Madison Square Garden, vows that show will showcase “the best wrestling out there right now.”

At the G1 Supercard on April 6th, Cobb will be in a rare ‘Title vs. Title’ match as he defends his ROH World Television Championship against NJPW’s NEVER Openweight Champion Will Ospreay. This will be the first time ever that these two wrestlers will face off in singles competition, and Cobb is determined to leave the show with two belts.

It will be an interesting clash of wrestling styles, to say the least. Ospreay is known for his daredevil acrobatics and insane aerial athleticism. However, Cobb is one of the most unpredictable wrestlers active today. Despite being built more like a heavyweight — standing 5-foot-10 and weighing 263 pounds — Cobb is capable of balancing raw power with incredible agility in his own right. One of his most impressive maneuvers is a standing moonsault powerslam, in which he does a standing backflip while holding his opponent in a front powerslam position. 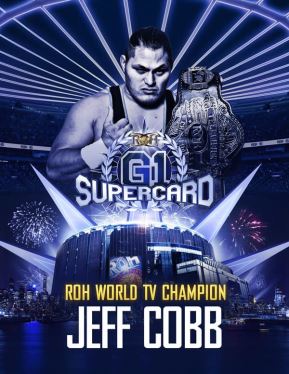 Cobb managed to achieve this impressive combination of strength and agility thanks to years of intensive training and practice. Before he started wrestling professionally, Cobb was an amateur wrestler and competed on behalf of Guam in the 2004 Summer Olympics. During this training, Cobb did an immense amount of lifting and strength training, which allowed him to succeed in his wrestling ventures. He also noted that the transition from amateur to pro wrestling was indeed challenging, but not for the reasons most would expect.

“The transition was fine, but physically amateur is much harder than pro wrestling,” he told SLAM! Wrestling. “The more challenging parts are what they don’t teach you, like selling and character work. Those things were much harder to put together.”

While an amateur, Cobb actually wrestled at Madison Square Garden during the 2003 World Freestyle Championships.

His hard work paid off, and before long Cobb started achieved big success on the independent scene. He began by winning heavyweight titles in one indy promotion after another, including Action Zone Wrestling in Hawaii, All Pro Wrestling and PREMIER Wrestling in California. Then things really picked up for Cobb when he signed with Lucha Underground and started performing under the name Matanza Cueto. During his tenure there, Matanza/Cobb became a top star and got to wrestle with some of the biggest names in lucha libre history, including the legendary Rey Mysterio.

“[Mysterio] is one of the greatest ever. He has wrestled for a long time, and he’s still going at such a high level. He gives the fans their money’s worth every night, and it’s great to see him at his best,” he said. “Guys like Rey and Chavo [Guerrero Jr.] helped me and the other young guys out. We had little experience with TV and these veterans taught us a lot. I had a great blast working with those guys.”

Soon after signing with Lucha Underground, Cobb also inked a deal with Pro Wrestling Guerilla. That decision proved to be one of the best he ever made, as it helped catapult him to a higher level. Not only did he win the PWG World tag team championship with Matt Riddle, but he also won the 2018 Battle of Los Angeles (BOLA), and soon after that, the PWG World championship, the latter being a title he still holds today.

“It was a very surreal moment [winning BOLA] just for the fact that, besides the G1, BOLA us one of the best tournaments that you can be a part of, let alone win. Guys that have won it have elevated their game, and I got to be on that list of winners. It’s truly an awesome feeling,” he said. 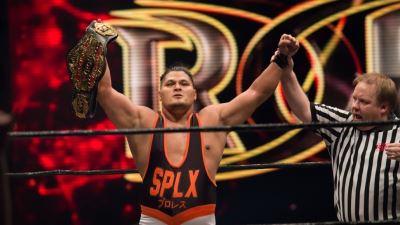 If history is any indicator, then Cobb is totally correct in this statement. Most of the previous winners of BOLA have gone on to achieve immense success in wrestling. These past winners include: Davey Richards, Marty Scurll, Zack Sabre, Jr., Kyle O’Reilly, Adam Cole, Ricochet (who won it twice), and of course, Kenny Omega. Now that Jeff Cobb has added his name to that list, he hopes to achieve even greater success in the future.

“My goal is to work with as many New Japan guys as I can,” said Cobb, explaining that many of the best wrestlers in the world are in Ring of Honor and New Japan right now. “I want to be in this year’s G1 Climax, because I love tournaments. I want to face guys like Okada and Tanahashi in New Japan, and I also want to face Jay Lethal in ROH since he’s the man there right now. I want to continue to do my part to get ROH out there to make it bigger to try and elevate it even more.”

While Cobb is optimistic about his own future, he’s also very happy with the state of wrestling in general. He thinks all the companies he has worked for are great in their own ways, and doesn’t put one above the other in terms of preference. He’s also one of many people that are optimistic about All Elite Wrestling (AEW) becoming a big player in the wrestling landscape.

“It’s good for the business. Anywhere, anytime pro wrestlers can make a living with wrestling, I think it’s great,” he explained. “When they get their TV deal, it will open up so many more avenues, and will elevate wrestling as a whole.”

As for the immediate future, however, Cobb is looking forward to not only his own match against Ospreay, but also the main event between newly-crowned IWGP Heavyweight Champion Jay White and NJPW ace Kazuchika Okada. “Regardless of who wins, it will be a great match.”