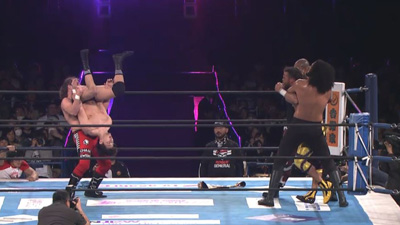 The Semifinals of this year’s New Japan Cup have been confirmed. It will be Tomohiro Ishii versus Kazuchika Okada and Hiroshi Tanahashi against Sanada to decide who will meet in the finals this Sunday.

On Night Ten, Sanada moved on by putting Colt Cabana away with Skull End. Sanada also made last year’s Semifinals.

Hiroshi Tanahashi moved past Zack Sabre Jr., the most exciting wrestler in the world today, with a Japanese Rolling Clutch.

On the show, Bullet Club’s Chase Owens once again got under Juice Robinson’s skin as he has been the entire tournament.

After Bullet Club were victorious over Ren Narita, Mikey Nicholls and Juice Robinson, Bad Luck Fale and Hikuleo swarmed Robinson. As they held him in their clutches, Owens taunted Robinson with his IWGP United States Championship.

“Watch this!” he said as he Package Piledrove Narita a second time. The first time was to win the match minutes earlier.

Fale and Hikuleo beat Robinson down to the mat.

“That’s my title!” yelled Owens as he and Robinson had a tug of war over the belt.

Owens, who apparently was made an honorary Tongan by Bullet Club, claimed he would be the first Tongan IWGP United States Champion.

Chase and Robinson will battle for the title this Sunday, the final night of the New Japan Cup tournament.