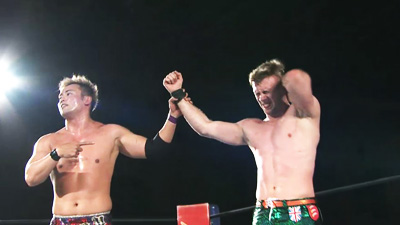 The Chaos faction ruled the action on Night Nine of the New Japan Cup.

Chaos leader Kazuchika Okada took on NEVER Openweight Champion Will Ospreay while Tomohiro Ishii faced off against Yoshi-Hashi for spots in the Semifinals of the tournament.

Ishii and Yoshi-Hashi started things off with a hard-hitting, ruthless bout that saw both men pushed to their limits.

Yoshi-Hashi clobbered Ishii with a kick and a clothesline of his own but couldn’t capitalize by making a cover even with the crowd cheering him on.

An unstoppable Ishii would not be pinned by a Fisherman Buster or double knees to the chest. He would eventually defeat Yoshi-Hashi with his Brainbuster.

Okada and Ospreay has a similar match with each outwitting the other. Okada had the presence of mind to thwart an OsCutter suplexing Ospreay, however, Ospreay hit back reversing a Rainmaker Clothesline into a Spanish Fly for a very close pinfall.

Two Shooting Star Presses on Okada only scored Ospreay a two count. Ospreay went for the OsCutter again. Okada caught him with a drop kick to the chest. Two Tombstone Piledrivers and a Rainmaker put Ospreay away.

In the Semifinals, Okada will now take on Ishii.