Josh Briggs has a big future

On Saturday, January 19, during EVOLVE 120 at La Boom in New York City, Josh Briggs scored a victory against WWE NXT contracted talent Angelo Dawkins. If that doesn’t tell you right there this young 25-year-old, who stands 6-foot-8 inches tall, is on the right career path then nothing will.

Briggs, who has just celebrated his third year as a professional wrestler, is living the dream as he can now afford to do this full-time. Under a contract with EVOLVE for the past year, he has been picking up steam in the past few months. 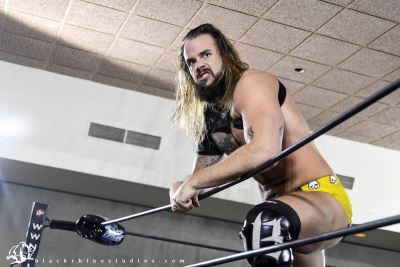 “When I started, EVOLVE is where I wanted to end up, and it happened a lot quicker than I was expecting. I am really happy and very fortunate,” Briggs told SLAM! Wrestling.

It’s a fantastic position at such a young age to be able to learn while making a living right on the WWE radar without the pressure of the NXT spotlight. Besides getting in the ring with Dawkins, Briggs also took on Johnny Gargano the night before during another EVOLVE show in Brooklyn.

EVOLVE is giving him great exposure and experience letting him create his own schedule elsewhere. He is a fixture with Beyond Wrestling and has started to venture to Canada. PCO, who just signed with Ring of Honor, requested Briggs be his final opponent on the indy scene in a match in Montreal for FLQ Wrestling on January 5.

The veteran PCO, who reinvented his career last year, felt a connection with the young man. “I love working with Josh,” said PCO. “He is a big man full of talent.”

Briggs is originally from Bullhead City, Ariz., where everyone knew him as Josh Bruns. He went to Mohave High School, and excelled at football. After two seasons at Glendale Community College of Arizona, he moved up to NCAA Division 1, across the country at the University of Massachusetts in Amherst.

Just like in wrestling, he was seen as a player who could be a game changer. “Josh will provide immediate depth to our offensive line and give us much needed experience at the tackle position. Josh possesses the characteristics that we look for in every player: smart, disciplined, and tough,” UMass coach Charley Molnar said upon the announcement of Bruns’ signing. “I look forward to his arrival in January and getting him acclimated to the Minuteman Way.” He played two seasons there, 2014 and 2015, getting into 21 games as #55. Bruns graduated with a 3.4 GPA in marketing.

He is more than just imposing size, and is a very smart man in a business where what you do with your brain is often as important as your physical attributes. But he wasn’t dreaming about the NFL, he was dreaming about the squared circle since for as long as he could remember. 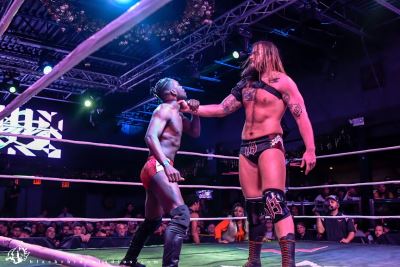 Josh Briggs towers over his opponent.

“When I was five years old, I got a bunch of wrestling action figures and I wanted to know where they came from,” Briggs recalled. “When I saw wrestling, I knew right away I wanted to do it. It was ultimate entertainment and I wanted to be a part of it.”

Originally he had figured that with so much talent available to the WWE that his career path would probably take him to Japan first. He was afraid to get lost in the shuffle. The experience and opportunities he has gotten with EVOLVE have taught him an important lesson: “Talent always rises to the top. As long as you make good of your opportunities everything good is going to happen.”

There is no rush now, but don’t be surprised that sooner rather than later you’ll see his name on a list of wrestlers joining the WWE Performance Center.