Considered one of the scariest and toughest wrestlers on the independent scene today, “Strong Style Pitbull” Brett Ison intimidates his opponents from the moment he enters an arena. Walking down to the ring with a towel over his head like Tazz or Minoru Suzuki, the 6-foot-3, 270-pound Ison commands fear and respect from his peers and viewers alike.

Ison has some high profile bouts approaching, including Paradigm Pro Wrestling’s Heavy Hitters Tournament on February 7th, at the Jeffersonville Arena in Jeffersonville, Indiana. And his first opponent will be none other than New Japan Pro Wrestling mainstay, “Big Mike” Michael Elgin, a former Ring of Honor World champion.

That tournament will showcase a type of pro wrestling called “American Strong Style,” which blends the traditional American style with elements of Japanese puroresu. In this tournament, there will be no count-outs, no disqualifications, and no weight classes (which means any wrestler of any weight division and enter). The winner of this particular tournament will receive a future shot at the Paradigm Pro Championship.

Of course, getting that future title shot means winning against 15 other top wrestlers. A participant can only win a match via knock-out, submission, pinfall, or referee stoppage. With those stipulations, Ison is considered a favorite to win the entire tournament.

Like many of today’s wrestling stars, Ison grew up idolizing the stars of his childhood and wanted to follow in their footsteps. As a child, the two wrestlers to influence him the most were The 1-2-3 Kid / X-Pac and Rey Mysterio, Jr. Ison, like most wrestling fans, loved the cruiserweight style and the believable underdog stories told through these smaller wrestlers beating bigger, established stars like Razor Ramon and Bret Hart.

That love for cruiserweight wrestling can still be seen in Ison’s matches. Despite being a clear heavyweight, Ison can still execute a suicide dive through the ropes like someone half his size. That impressive agility, coupled with his raw power and hard-hitting offense, makes him a formidable opponent inside a wrestling ring.

“Growing up, I spent a lot of time watching old wrestling VHS tapes. My dad had a lot of ECW tapes, and one of favorite feuds was the one between Mike Awesome and Masato Tanaka,” said Ison.” I loved watching their matches and listening to Joey Styles yell ‘roaring elbow’ Later on, I found (Mitsuharu) Misawa and Chris Hero, and saw them using the move as well.”

That particular move has become a calling card of sorts for Ison. This elbow strike, which he calls the “Iron Elbow,” has helped him develop a reputation on the independent wrestling scene for hard-hitting strikes. Ison’s other signature moves include a high-angle backdrop suplex and a double-underhook piledriver, both of which are moves that were made famous in Japanese puroresu. 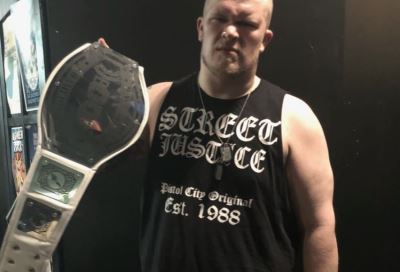 That reputation has also translated into great success for Ison. He is particularly proud of his biggest championship wins, those being his SWF Championship victory at the Gypsy Joe Arena in Tullahoma, TN, and becoming Southern Underground Pro’s Bonestorm Champion. He is also very proud of his title defense against B-Boy, a man for whom he has great respect.

“Being able to create memories with a man that I looked up to growing up was just amazing. I spent three days with the man, learning a lot about life and wrestling,” he said.

Ison is entering prime of his career and has many years still ahead of him. Yet despite that, he still has some advice to pass onto anyone that might consider entering the pro wrestling business.

“This business is tough, mentally and physically. Find a good trainer or school. There are several in Tennessee that I would recommend,” he said. “Do seminars, even if it is run by someone you wouldn’t necessarily want to do one with, just because they will probably teach you something you never knew or they’ll teach you something in a better way.

“Do the drives, you will have to make certain sacrifices for this business and career. This crazy business can be one of the loves in your life or the thing that will make you hate it. Just depends on how you want to go.”

Once the Heavy Hitters Tournament ends, Ison will still have his hands full. Two days after that tournament, he will be wrestling Chip Day at a Revive Pro Wrestling show. Plus, for those fans that will be traveling to New York City and New Jersey for WrestleMania 35, they have the chance to see the Strong Style Pitbull live as well.

During that weekend, Ison will be wrestling for Independent Wrestling TV’s Family Reunion show, teaming with Kevin Ku and Dominic Garini against the team of O’Shay Edwards, Cabanda Man Dan, and Mr. Brickbuster.

After that, Ison hopes to someday have a dream match with Eddie Kingston. “Eddie Kingston is at the top of my list. He is just raw and real. He has influenced me inside the ring and out.”