Few in the wrestling world knew Michel Lamarche, who died today, January 5, of kidney failure at age 71; instead, they knew him as the hated Russian Alexis Smirnoff, and as the angry heel Michel “Le Justice” Dubois in Quebec and Mike “The Justice” Dubois elsewhere.

Lamarche had been in and out of hospital for a year. He spent Christmas at home, in the Atlanta area, and entered hospice care days after.

Michel Lamarche was born February 9, 1947 in St.-Lim, Quebec. After dabbling in the amateur game, Lamarche trained with Edouard Carpentier and started out as Michel “Le Justice” Dubois in 1970, a name suggested by Montreal promoter Bob “Legs” Langevin. The Dubois family in Montreal was always in the news, always in trouble with the the law. After six months in Kansas City, he terrorized the scene in Quebec and the Maritimes. He was a star because he spoke French. 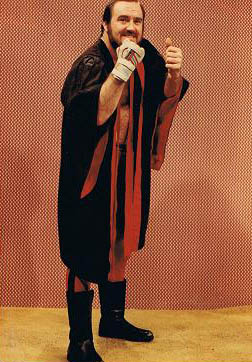 “Things were rolling real well for me,” recalled Lamarche for SLAM! Wrestling in July 1999. “The fact that I was speaking French, I could get the people really hyped up.”

Between 1970 and 1974, he fought all the big names in French Canada — Johnny Rougeau, Edouard Carpentier, Eddie Auger, Abdullah the Butcher, The Shiek, Mad Dog Vachon and was a three-time International champion out of Montreal.

In 1974, the 6-foot-3, 255-pound Lamarche went to Texas to the territory run by the Funk brothers, and wrestled as Mike “The Judge” Dubois. Eventually, he even became Texas heavyweight champ. From Texas, he went to North Carolina for two years, often teaming with Rene Goulet.

The year 1977 came, and Lamarche was wondering about the direction of his career. “I decided that Michel Dubois was not a big attraction in the United States, that I needed a gimmick,” he recalled.

On tour with Ivan Koloff, he realized that “The Russian Bear” got heat from the crowd just because he was billed as being from the U.S.S.R.

Koloff suggested that Lamarche consider leaving “The Judge” behind. “He told me, ‘Why don’t you change your gimmick to a Russian? There’s not too many Russians in the business,'” Lamarche remembered. “‘It’s easier to do some interviews’ because in those days I could barely speak English. So you go to TV and say we are the greatest minds, blah, blah, blah and that was it. So it was easier for my interviews. I would shave my head and it would look really good.”

So in 1977, he went west to San Francisco and, without doing any research on the Russian way of life, became “The Mad Russian” Alexis Smirnoff.

“It did get over real well in San Francisco, Japan, Korea, most everywhere,” he said.

In 1978, Lamarche signed a big contract with Japan for three tours a year, and by the end of his career, he had been the The Land of The Rising Sun 30 times.

He had huge success in Japan, and was even briefly the IWE World champion in 1979, beating and losing to Rusher Kimura. Lamarche remembered his win. “I know Andre the Giant was there that night. After the fight when I’d won the title, Andre the Giant, he says, ‘you’ve made it for life in Japan.’ …. They don’t give the strap to too many Americans or Canadians.”

Over the years, Alexis Smirnoff wrestled for both All Japan and New Japan, and fought the likes of Giant Baba, Antonio Inoki, Ric Flair, Terry Funk, Bruiser Brody, Jimmy Snuka, Bruno Sammartino and The Destroyer.

Back in the U.S. from 1979-81, he found himself teaming with Ivan Koloff in Atlanta, and the Russian duo were tag champs. “To me, he was my best tag team partner,” Lamarche said. “We didn’t really need to talk to each other, just look and we’d know what to do. He was a very good partner and we were a very good team together.”

Following that stint, he went back to Montreal where he tagged on a regular basis with Mad Dog Lefebvre.

Around 1982, he settled down south of San Francisco for family reasons. “The kids were getting old enough to start school and I didn’t want to move my family around.” Family life always came first for Lamarche, who has been married 22 years, and has two girls and one boy, all young adults now. “I always separate wrestling and my family,” he said. “You come in my house, I’ve got a lot of Japanese souvenirs, stuff like that, all my stuff of wrestling is back in a box somewhere in the garage.”

His schedule a bit lighter, Lamarche hit Hawaii and Australia on occasion, in between his regular trips to Japan. He also did regular work for the WWF on the West Coast but it didn’t last. “I quit WWF in 1985 because they wanted me to quit my contract that I had in Japan. For me, Japan was my bread and butter, so I decided to keep going to Japan.”

His last big mainsteam gig came in 1987 in the AWA, where he partnered with Igor Gordienko (Paul DeMarco) for about six months, wrestling mostly The Rockers — Shawn Michaels and Marty Jannetty.

Talking about the AWA brought back not-so-fond memories for Lamarche, who had been in the promotion for a short period of his time earlier in his career, when he was dubbed “La Machine” Cecil DuBois in the AWA. Why that name?

“That was the stupidity of Verne Gagne,” Lamarche laughed. “After all the exposure I had, all the publicity I had under the name of Smirnoff, Verne Gagne loved French people and he knew that I was French. He brought me to his territory and I didn’t even know, I came back from Japan, and I flew to Denver for my first show, and looked around as asked what’s going on? I’m not on the card? He said your name is Cecil Dubois. I asked why Cecil? At least you could put Michel Dubois! So Verne Gagne said ‘I didn’t know your first name, blah, blah, blah. You’re a French-Canadian and we’re going to start to go in Quebec, and all that. People know you up there. And he says, I don’t really need a Russian right now.’ So, that’s one of the reasons that I did not stay too long in Minnesota.”

Lamarche retired in 1988. “I always promised at 40 years old I would quit,” he said. “After 20 years of getting beaten up, taking falls, and everything you think and do, I saw so many wrestlers get injured at 45, 48, 50, and they never came back. So at 40 years old, I figured I was still in pretty good shape, no serious injuries in my back, my knee or shoulder.”

Following his retirement, he took a year off, then had a wrestling school for a couple of years. Lamarche also did some has done commercial work for local car dealers and the Golden State Warriors NBA team. He also appeared in a couple of movies like The Bad Guy, Body Slam, Alcatraz 2000, and the TV show The Fall Guy. He later managed a pub in Freemont, California.

The Cauliflower Alley Club presented Lamarche / Dubois / Smirnoff with a Men’s Wrestling Award in 2018 in Las Vegas. During his acceptance speech, Lamarche said that his career was a tough road, a tiring one. “You were crying because you’re away from your family, but it’s a business and you cannot forget it.” His two daughters and son were there, and his wife, Julie, of 41 years — “she’s the one that really supported me, or I wouldn’t be here.”

News broke on Friday that Lamarche had been taken to hospice care with kidney failure. He died in his sleep on January 5. Funeral arrangements are not known at this time.

— with files from Pat Laprade