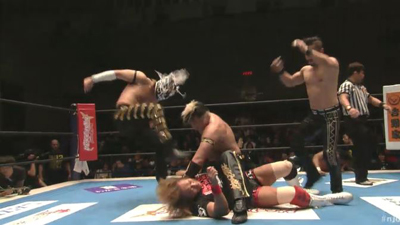 Although there were no grand surprises at New Year Dash many of New Japan Pro-Wrestling’s rebels made their sinister intentions known.

As Tanahashi walked away with the title after the match, White called him out from the ring.

“Okada, you keep walking. I have made light work of you. Tanahashi, I want that belt!” White demanded.

“I am better than you and you know it. I am going to prove that to you. This is not the Era of the Ace. This is the Switchblade’s era. My era and that is my belt!” White continued.

Tanahashi made his way back to the ring.

“You want to prove me wrong, old man? You can barely f—–g walk,” White laughed.

Once Tanahashi was in the ring, Gedo, White and Fale attacked him. Okada attempted to save Tanahashi but ate a Grenade from Fale.

Switchblade gave Tanahashi a Blade Runner and then paraded around the ring with the IWGP Heavyweight Championship.

Earlier on the card, Taichi of Suzuki-gun gave IWGP Intercontinental Champion Naito a warning. In the match between Suzuki-gun and Los Ingobernables de Japon, Taichi brutalized Naito with a chair throughout the match. He would pin Naito after crowning him with the Intercontinental belt. With all of Los Ingobernables de Japon laid to waste, Taichi took to the microphone to challenge Naito to put the belt on the line against him.

Rocky has a lot of enthusiasm with his Forever Clotheslines against Lance Archer but they have little effect on the big man. Archer just scoops him up slamming him on the ring apron. Iizuka chows down on all members of Roppongi 3K. Yoh rolls up Iizuka for the win. After the match an angry Smith powerslams a Young Lion on the arena floor as Lance Archer throttled some others.

Chase rolls right out of the ring to avoid Honma’s Kokeshi. Chase and Takahashi take things to the floor. Chase throws Honma into the ringside barrier. Chase mocks Honma as he lands a Kokeshi on Henare. Chase then flips Honma off. Chase pins Henare with a super kick to the face and his Package Piledriver.

Beretta’s mom is in the audience. When he gets drop kicked in the face, he retreats into the audience to get a hug from her. As Beretta returns to the ring, Chuckie T takes exception to the hug and begins arguing with Beretta. Best Friends bend the rules a tad by hurling both Finlay and Robinson into the ringside barrier. Chuckie drapes Finlay over the barricade. Beretta leaps off the apron to double stomp Finlay. At 9:03, Chuckie T clobbers Finlay from behind with a steel chair to the back. Best Friends are disqualified. Chuckie slams Finlay on the steel chair. Juice Robinson finally pulls the chair out of Chuckie’s hands. Beretta yanks the chair away from Robinson. The two get into a shoving match. Chuckie throws a chair into Robinson’s face knocking him out. Chuckie and Beretta argue about what happened. Beretta herds Chuckie to the back. Chuckie breaks free, runs back into the ring and piledrives Finlay on a steel chair.

Winners: …via disqualification at 9:03, Juice Robinson and David Finlay.

Chaos works over Kushida for like six minutes straight. Nagata saves Kushida from being pinned by kicking Ishii in the back of the head. Ishii doesn’t appreciate that. He slaps Nagata in the face and head butts him off the apron. Ishii and Nagata trade forearms in the middle of the ring. Nagata takes Ishii down labeling him with kick after kick and punches to the head. Ospreay pinned Kushida with Stormbreaker.

Winners: Chaos (Will Ospreay, Hirooki Goto and Tomohiro Ishii) at 14:02.

Loa whips Toru Yano into the exposed turnbuckle, which was Yano’s own handiwork in the first place. Tonga is still playing up his “face turn” admonishing his partners when they ponder stretching the rules. At 7:11, Jado hits Taguchi across the back with this kendo stick. Makabe upends Loa with a drop toe hold. Yano hits Loa in the chest with a steel chair. Makabe almost gets the three count until Ishimori pulls the referee out of the ring. Yano stops Jado from hitting Makabe with the kendo stick by punching him in the “lower abdomen”. At 11 minutes, Yujiro Takahashi and Chase Owens attack knocking Makabe off the top rope. Owens brains Makabe with the Package Piledriver. Loa makes the pin with Ape S—t. Ishimori puts Taguchi in the Yes Lock. Tama Tonga welcomes Owens, Takahashi back into the Bullet Club fold.

Before the bell can ring Taichi hits Naito in the head with a steel chair as Suzuki-gun jumpstarts the match. Naito is still out of sorts from his match with Jericho at Wrestle Kingdom last night. The match goes to the arena floor where Minoru Suzuki chokes out Sanada with a ringside barrier. Taichi continues to beat and choke Naito with a steel chair. Desperado almost unmasks Bushi. Taka Michinoku distracts the official while Taichi hits Naito in the head with the Intercontinental belt. He pins Naito to the shock and surprise of everyone in attendance. Suzuki-gun puts the boots to Naito after the bell. They then take out the rest of Los Ingobernables de Japon. Taichi demands a title match with Naito.