“Mean” Gene Okerlund, the voice of the WWE and one of their biggest wrestling personalities in the eighties, has died. 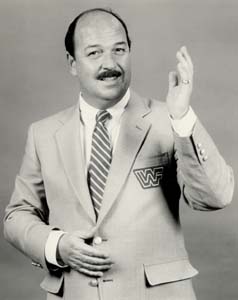 A broadcast journalist and a disc jockey, Okerlund began his career in the American Wrestling Association (AWA) in 1971, and then moved on to the World Wrestling Federation where he would make his mark as an interviewer setting the standard in the WWE for some time to come.

The departure from Verne Gagne’s AWA, in 1983, left a scar with Gagne, who once told the Pro Wrestling Torch, “I think he’s one of the best announcers in the business. In wrestling today there’s probably none better. As far as him personally, no comment.”

“I was reluctant to leave (the AWA),” Okerlund told SLAM! Wrestling Bob Kapur in 2005. “(In addition to my job there), I also had an advertising and marketing business in downtown Minneapolis, with 40 or 45 people working for me, and things were going good. But Vince McMahon is a very persuasive individual. (What won me over was) the entire concept of what he was going to do, to bring the glitz and glamour and marry it with professional wrestling.”

His backstage interviews with Hulk Hogan — “Let me tell you something, Mean Gene!” — The Ultimate Warrior, Roddy Piper and other 1980s stars made Okerlund just as big a star, a household name as the superstars he famously interviewed.

“I was actually what you would call a stick man, doing most of the interviews,” Okerlund told journalist Brian Fritz in 2009. “Interviews became such a big part of television wrestling and that was my claim to fame.”

As he became a fan favourite, Okerlund’s role expanded into skits on such WWE variety shows as Tuesday Night Titans and on WWE Coliseum Video releases. He was on Hulk Hogan’s Rock ‘n’ Wrestling cartoon and was one of the original LJN figures released. His pairing with Bobby “The Brain” Heenan and Lord Alfred Hayes made for comedy gold in the WWE.

In 1993, Okerlund left the WWE and began working for WCW. In WCW, Okerlund found himself playing a mentor role to some of the young, up-and-coming talent who might not have been as comfortable on the mic as some of the veterans he was used to dealing with in the WWF.

“We did not script anything in WCW. It was not quite as tight a product,” Okerlund told Bob Kapur in 2005. “A lot of the people that were coming up during that particular period of time didn’t go to the old school. So my role there became even more important, because I had to help some of the guys get through a complete thought about their upcoming match.”

In 2006, Okerlund was inducted into the WWE Hall of Fame by Hulk Hogan. He was a frequent guest at fan fests and conventions around the continent.