PITTSBURGH – The buzz around the December 29 taping for next Tuesday night’s Smackdown Live was quite different than when the WWE was in town for its last PPV.

The crowd was late-coming, but the first two Universal Title replica belts around waists were spotted mere minutes after entering the door. This is different than most Pittsburgh PPVs, where at Extreme Rules in July and Roadblock the year prior, fans piled fake belts at the metal detectors upon entry. 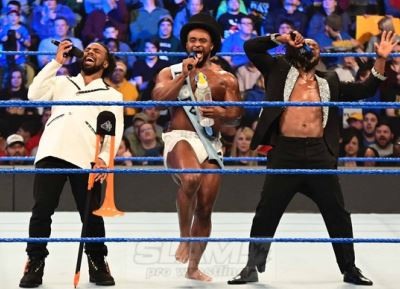 Did you want to see Big E as a New Year baby? WWE has you covered at Smackdown, airing on Tuesday! Photos by Joe Hrycych, hwww.hrycychphotography.com

It was also more subdued as all 14,739 in attendance were alerted that Hulk Hogan was backstage at Extreme Rules. All eyes collectively looked at the ramp all night long, eagerly expecting an appearance that never came.

Other than that, this is a spoiler-free review of the goings on this Saturday night in the Steel City. The show will air on New Year’s Day.

Among the early arrivals was Dan Polinksy, the proud father of WWE broadcaster Corey Graves and international heel Sam Adonis. Graves received a warm reception — as always — from the fans who knew him from Independent and Sterling James Keenan days. Polinsky would report that Adonis was once stirring emotions south of the border in Mexico. Polinksy had prime seats, approximately seven or eight rows back from the action, just above the floor seats and the roaming crane with camera. 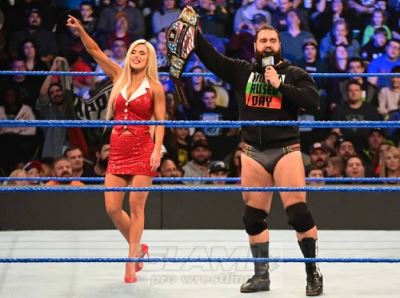 Shades of Bruno Sammartino in Rusev?

As the all-purpose arena filled, some fans could be shouting for Daniel Bryan or a random restaurant chain. As predicted, they were gassed some 19 minutes later when a perplexing and elongated recap of the last Wrestlemania played. This year’s installment is set for April 7. (Odd due to the fact that WWE returns to Pittsburgh for an episode of RAW before then on March 11.)

Two 205 Live matches were the first thing recorded. The first was Kalisto of the Lucha House Party versus Lio Rush. Rush of course is best known as the mouth for RAW brand’s Bobby Lashley. Kids in attendance, assuredly rewarded with tickets from Santa Claus, cheered wildly for the festive Lucha House Party which also consists of Gran Metalik and Lince Dorado at ringside. The only spoiler about this athletic match is that it took between 15-20 minutes.

Akira Tozawa versus Drew Gulak was next. Gulak, introduced from Philadelphia, Gulak could be from Mars as far as Pittsburgh fans are concerned. This match also took nearly 20 minutes and at one point, it was possible to hear normal, individual conversations some 60 yards across the ring.

Before the Smackdown portion of the event was taped, Pittsburgh morning radio host Colin Dunlap and his family arrived to front row seats. Mr. Dunlap and his wife Raina are raising two young twins, Declan and Darran. Daughter Darran has leukemia and has battled like a trouper. As fortunes would have it, Dunlap and former WCW announcer — as well as longtime, fellow Pittsburgh sports announcer Mark Madden — entered into a rough Twitter battle within a day prior to the event. The barbs raged about Steelers football, and more personally: charitable giving. Madden and Dunlap’s assigned seats were right next to one another. It appeared that Madden’s seat was right behind that of Dunlap. When Madden arrived, he sat down, recognized and said hello to Dunlap. And when a video about Darran played on the jumbo screen and people stood to recognize Darran, Madden generously walked far from the camera shot. According to Dunlap’s Twitter, Stephanie McMahon arranged for the seats, the video and shout-out. In addition, Darran and brother Declan snapped a photo with John Cena earlier in the evening. And most importantly, Dunlap and Madden posed for a selfie, with seems to have ended the feud.

When The New Day was announced to start Smackdown, Pittsburgh stood solidly behind the pancake-chucking trio. Being that it’s a New Year’s taping, Big E wore an enormous diaper and looked like Baby New Year. Spoiler alert, he tossed pancakes pulled from the front of his diaper into the crowd. The fans didn’t seem to mind as Big E, Xavier Woods and Kofi Kingston still brought the funny and extended several storylines. One of the angles they talked about was the match between Jeff Hardy and Samoa Joe, which started next.

Next up was the new United States Champion, Rusev, along with Lana. It was interesting to note that, spoilers aside, Rusev cemented the “new” image as an immigrant-turned people’s hero. Perhaps the notion played nowhere better for professional wrestling than in Bruno Sammartino’s adopted hometown of Pittsburgh. His rivalry with Shinske Nakamura will continue.

A quick back-stage drama started with the Usos, Naomi and Mandy Rose. Then there was a match with Naomi and Sonya DeVille. Spoilers aside, the Mandy Rose push has officially begun.

Backstage videos featuring A.J. Styles and the McMahons popped up throughout the night. 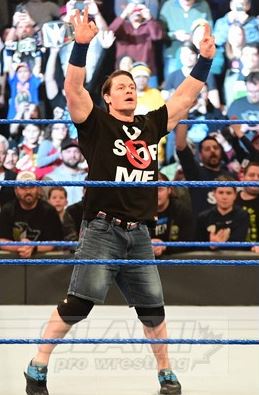 John Cena is back.

John Cena was next. The boos aren’t nearly as hearty in Pittsburgh, but the response was mixed, but loud. The reaction to Cena is still the loudest of the evening. A fun segment with Becky Lynch followed and then Andrade “Cien” Almas and Zelina Vega. The Jumbo tron cut off the “Andrade” portion of Almas’ name, much like it added Charlotte’s “Flair” during her Roadblock match years prior. Perhaps they will drop Almas’ first name as it is by far the most confusing on any WWE roster. The fans were entirely behind Lynch. With the sport-side support she has received in recent months, the response to her entrance was underwhelming but fans made up for it as the night, and match, went on. 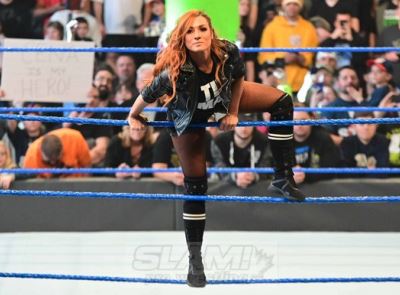 Becky Lynch is The Man.

This spoiler won’t hurt. The Miz and Shane McMahon were shown backstage next with a time-filling debate about matching tag team outfits.

The TV main event was a Fatal 5-Way featuring Rey Mysterio, A.J. Styles, Mustafa Ali (who looks exactly like a poor man’s Smackdown Seth Rollins), Randy Orton and the winner of the Hardy and Joe showdown from earlier in the evening. Avoid the spoilers and watch Smackdown Tuesday. 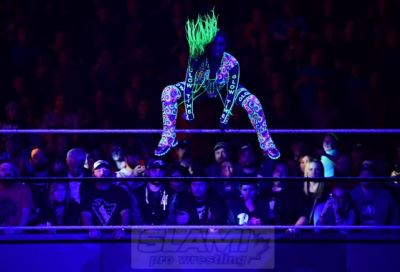 Immediately following the conclusion of Smackdown, Pittsburghers were treated to a unique and un-advertised dark match with substance. Nothing of note occurred, but it was a lot of enjoyable nonetheless.