Each year, more and more Western wrestling fans have been attending New Japan Pro Wrestling’s Wrestle Kingdom at the Tokyo Dome. But in the shadow of the Dome sits an unsuspecting building, where those who have gone to the fifth floor have seen some of the best pro wrestling matches in history: Korakuen Hall. 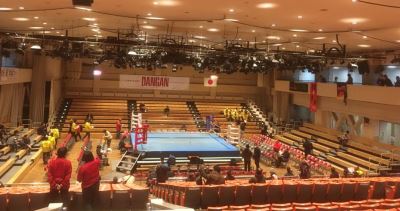 Korakuen Hall before the matches …

Similar to WrestleMania weekend, where promotions from around the world converge to run shows, Japanese wrestling promotions run shows at Korakuen Hall during the first week of the new year. Some of these lesser known shows delivered high quality wrestling that produced candidates for match of the year.

NJPW frequently runs Korakuen Hall, which is the favorite venue for Juice Robinson to wrestle in Japan. “That place is a little hotbox. It only fits about 1,700, 1,800, which is a lot of people actually, but it’s in a very intimate setting and there’s not a bad seat in the house,” said Robinson in November 2018 during a Ring of Honor Global Wars event in Toronto.

There aren’t any luxury suites in Korakuen Hall, which opened in 1962. As a fan in Korakuen Hall, the seating is very tight with very small chairs that I couldn’t fit into properly with my knees in people’s backs. When a fan in the middle of a row wanted to exit, a few rows of people had to pick up their chairs to let the person out since there was no room to exit. For popular shows they open up the standing room balcony, where fans will literally be shoulder to shoulder with the people next to them.

From NJPW’s early days in the 1970s, it ran regular shows at Korakuen Hall. Currently, when NJPW releases tickets to a show at Korakuen Hall, it quickly sells out. Since it sells out so fast, the majority of people in attendance are very big fans.

“It gets real hot in there, and I’m not talking temperature, I mean energy. It’s fun. And the people that go to the Korakuen shows are totally, always, 100 per cent up to speed with all the storylines; they’ve got their finger on the pulse,” said Robinson.

Christopher Daniels was of the same mind in a 2006 interview at Marvel.com, calling Korakuen Hall “the big hardcore wrestling fan place to go in Japan.”

In an August 2009 interview, Nick Jackson of the Young Bucks described debuting at Korakuen Hall to Ring Psych: “Being in the ring with the hot lights on you, watching streamers getting tossed from the crowd and looking out at the Dragon Gate banners from the inside of the ring and a memory I’ll never forget. ‘We made it from our backyard to Japan. Who would have thunk?’ I thought to myself while out there.”

And it’s not just the men, of course. In a 2011 interview with The Dirty Dirty Sheets, Serena Deeb talked about facing Kana — now WWE superstar Asuka — in the hallowed venue. “Korakuen Hall was a dream come true and pure honor,” said Deeb. “There are certain places, because of their history, that just have a special feel (e.g. Madison Square Garden), and Korakuen Hall most definitely ranks in that category. I had a special feeling that entire day.” 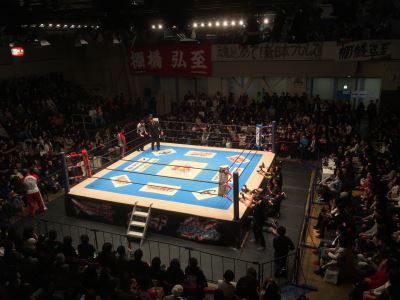 … and during the matches. Photos by Don Davies

Robinson has a special connection to Korakuen Hall since the fans appreciated his work there. “When I first got there, the first place that I kind of got over was Korakuen. Then other people see that you get over in Korakuen, the other fans, and then they watch the TV, and then they get to know you on the TV — but it all starts in Korakuen,” said Robinson.

Korakuen Hall is the favorite venue of KUSHIDA for a different reason “Lemon sours is very strong in Korakuen Hall, very famous drink,” said KUSHIDA. However, Sanada thinks that the lemon sours are “too strong.”