With many people impressed with NXT TakeOver WarGames, Paul “Triple H” Levesque talked to media after the show about how he and the NXT team are able to consistently deliver high quality pay-per-view shows.

Paul “Triple H” Levesque, Executive Vice President of Talent, gave his overall thoughts on the show, “I knew this was a good line-up coming in. I knew the card was good. There is something about the talent here. The hunger of young guys trying to outperform, trying to make their mark. It’s at a different level. They just want to deliver for everybody. I think it just shows their passion, and their pride.” 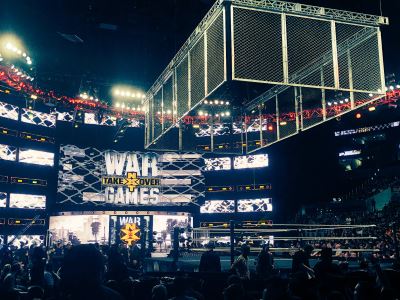 After giving an overview of the event, Levesque broke down each match. “What a night. From (Matt) Riddle walking out here and lighting the place up and with his aloof personality and coming out there and bringing a different intensity just in a spark moment to Shayna (Baszler) and Kari (Sane) who I think have phenomenal chemistry and you just watch four brand new characters coming out of that match tonight that will move this to a whole other level,” said Levesque.

Those four new personalities include Marina Shafir and Jessamyn Duke, who aligned with Baszler, and Io Shirai and Dakota Kai, who were alongside Sane. Some critics wonder if these four wrestlers are too inexperienced to perform in the spotlight position.

“I wouldn’t put them there if I thought they were going to fail at it. Is it a risk? Yeah, but it’s our job with any talent to try to protect the weaknesses, accentuate the strengths. We saw them do what they did tonight but it’s not like they are going to have an iron man match tomorrow. It’s going to be step by step. We will get to a place that is comfortable with them but I feel like they should deliver in the role they are in. The truth is in any talent when they are home grown, never done this before and you are walking them into something, you always have a doubt. Are they ready for what I am putting in front of them? They’re protected, they’re around something that allows them to only have to do things that we make them comfortable with,” said Levesque.

After the women’s segment, Johnny Gargano vs. Aleister Black took place and Triple H continued to break down the card. “They were going to town with each other. Gargano proving to be in some way the standard bearer for NXT. I think it’s his 11th TakeOver. He’s delivered on every single one of them.”

Following the Ciampa vs. Dream match, WarGames (Undisputed Era vs. War Raiders, Pete Dunne and Ricochet) ended the event. “When you talk about leaving it all out there. It’s just crazy good. Guys willing to just take their passion to another level, leave it all on the line. I don’t know how many rotations Ricochet made but that kid has a bass set on him,” said Levesque.

Each match featured great talent on the WarGames show. However, some of the great talent was unable to be showcased because of time restrictions. An option would be to increase the length of the TakeOver shows. However, Levesque does not want to increase the show length. “There are reasons to stay where we are at. I don’t feel like it’s a bad thing to have an abundance of talent that you don’t have to over expose. I would rather do that then see everybody every single week and then after awhile you start going like ‘what’s new?’ You are not going to get the same thing ever TakeOver,” said Levesque.