This was the episode we were all waiting for: the semi finals of the Mae Young Classic. Although both matches wree well fought, it was Toni Storm and Meiko Satomura who gave us a event we will not forget.

These two were both looking for a win, as the last time they met the match ended as a tie. Although it started with a few gripping headlocks and holds by both, they seemed to start off quite slow, something I was not expecting. It took a turn quickly, however, into a blood bath.

Storm attempted to wear Satomura down by keeping her on the mat but every chance she got, the Japanese legend got on her feet, hit Storm harder than ever before and gave her very little room to breathe. It was like she had released a monster, showing so much anger on her face — she wanted that win so badly.

A spinning leg kick and a DDT were not enough to keep the Storm at bay. Just as Satomura was about to unleash another DDT on her opponent, Storm countered it with a Storm Zero, giving her the win and a ticket to a spot in the finals at WWE Evolution. She will face the energetic Japanese talent, Io Shirai.

The emotion of relief and joy on Toni Storms face was a true testament to all of the hard work these women put into this sport. When she finally got the chance to let her feelings out she exclaimed, “I can now stand in this ring and say I am well and truly living my dream.” That statement right there is why I personally love watch wrestling. Strength, perseverance and raw emotion is what make this a great sport to watch.

Now that the tournament is over, we look forward to this Sunday were we are fortunate to witness history. WWE women from the past and present are going to lay it all out there. Of course, Toni Storm and Io Shirai are the two to watch. They are the future of women’s wresting after all.

This was the match up we were waiting for all tournament. I was arguably the most intense event of the 2018 Mae Young Classic. Toni Storm was careful not to make one wrong move. Surprisingly, Meiko Satomura didn’t come out strong like she did with her previously match ups. Suddenly, the Japanese veteran gets herself up and gives Storm a hard strike. Storm attempted submission locks and used all of her body weight to wear Satomura down. Satomura eventually gets mad, releasing a Death Valley Driver, but Storm kept pushing. Just as the Japanese legend tried DDT, Storm countered with Storm Zero to win the match. 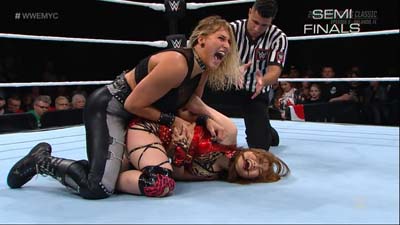 I expected these two to make it this far. Io Shirai was going to have to use her high-flying talents to her advantage to keep Rhea Ripley on edge. Of course, the Australian powerhouse used her strength and confidence to try and decimate her opponent and gave her no inch to break free, or breathe. Shiraz eventually realized that the only way she was going to defeat Ripley was by matching her physicality. The young Japanese flew out of the ropes for a suicide dive on Ripley. Even a superplex off of the top rope could not keep these two down. It was however, an Asai Moonsalt that gave Io Shirai a win and a spot in the finals at WWE Evolution.