By BEN NELSON – For SLAM! Wrestling

It was a woeful day to hear of the death of my friend Don Leo Jonathan, professional wrestler, scuba diver, hunter, fisher, and outdoors enthusiast. We met in 2002 at the Cauliflower Alley Club reunion via a mutual friend, and I had no idea how great he was until we spoke years later in his home.

He was an exceptional man in all aspects of his life and over the past three years we have grown very close. I was privileged to help him write out a collection of his life stories, and every time we talked I heard something that I thought was truly amazing.

What else can be said of a 6-foot-6, 300-pound man who constantly improved himself and his focus in life? 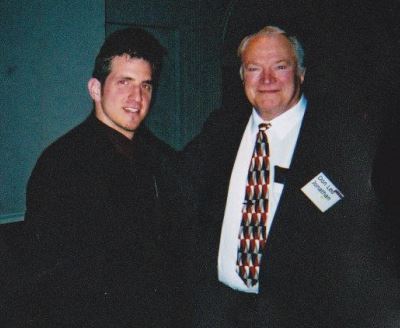 His lineage can be traced directly to the kings of Scandinavia and the First Nations of North America; his life as the Mormon Giant personified his accomplishments physically and spiritually. He was, to the core, Mormon and believed in his faith. He had been baptized in a hot spring in Utah and received a blessing that predicted for him parts of his life, and he always trusted in those words, though he did not tempt fate. Although, when you hear his life, you wonder what would have qualified as “Tempting Fate.”

He frequently wrestled a 500-pound black bear throughout British Columbia and the rest of Canada. He told me the bear could be ornery, and although it was muzzled and its claws covered or removed, it would try to force his hands into the muzzle so it could bite his fingers off! The one time he pinned it, it was irate and from its back, scratched at him like an angry cat. If it had claws, he said, he would have been gutted in no time.

He also spoke of slamming Andre the Giant. It was a true reflection of both Leo’s strength and humility. When I asked him how it was, he said, “Well, at that time, Andre was about 500 pounds. So, to get him up was a bit of a push.” That’s it — hoist 500 pounds, and call it a “bit of a push.” The man was legitimate, and legitimately humble. These are things seldom found together these days, and are more and more rare when I think of what else he accomplished.

Leo fought an Olympic champion Dutch Judoka Anton Geesink to a time-limit loss in Japan. The Dutchman was 6-foot-6 and also over 300 pounds. When the battle commenced, Leo was a second Dan (black belt) in Judo. After the battle, in which Leo lost by 1/4 point, the Japanese Judo commission awarded him his third degree black belt.

Also in Japan, Leo worked frequently with Rikidozan. To put it in perspective, at the time Rikidozan was akin to the Hulk Hogan of Japan. He was a former sumo star and a bad-ass who died from refusing to acknowledge the danger of a stab wound in a bar. His legacy extends to what we know as professional wrestling in Japan today.

Leo never complained about the style or stiffness of Japan, and in fact, was encouraged by a handler in Japan to ease up on the local talent, from the top down. He was working almost exclusively with Rikidozan at the time, if that tells you something. This was a time when shooting and working were the same thing for the majority of the people there. Leo was too good at both.

There are a tonne of stories I’m still catching up on, but the last time I saw Leo, he was as warm and genuine as a person could be in his situation. He’d been in hospital for about three months; every time I was in Vancouver, I’d make the trek to see him and we’d sit, eat a bite of smoked salmon or fresh berries from my yard, and we’d talk about his days as a wrestler and diver.

One time as we watched a video of him against Otto Wanz, Leo remarked, “I’m getting homesick, let’s do something else.”

Hospitals are tough, especially for a huge man stuck in a small space. Imagine spending months on end in an airplane seat, reclining, then lying, then sitting up, then reclining being all you can do for entertainment. It is stupefying and exhausting, boredom so bad it can dry even the most generous of spirit. It didn’t dry or defeat him. He wanted to be home, but it didn’t ruin his sparkling eye or excitement at talking about his times on the road, his second home, and he always was cheery to see the love of his life, Rose, come in and remind him of his warm home in Langley, BC. 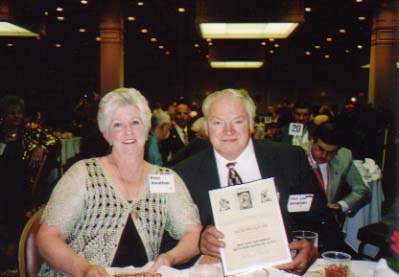 Rose and Don Leo at a CAC reunion. Photo by Greg Oliver

Perhaps that was his greatest accomplishment. Leo was through and through a man of great strength, not just physical, but emotional and spiritual. He loved joking with his wife and lit up whenever she said anything to him. I spent dozens of hours sitting in his house, talking with them, and seeing them interact. Not a hint of disharmony, not a hint of regret, not a hint of over-familiarity. They loved each other, to the very final ounce of their being, and taking her for granted was not a fate he would tempt.

Leo, the fisherman, was having a great run one day pulling huge salmon from the Fraser River. Every time his coolers were full, he’d bring home his catch for Rose to clean and can. After 12 hours of canning, Rose, drowned in fish guts and salmon stench, told him, “You bring another fish in here and I’ll gut you!” As he put it, “She threatened me!” But it takes two strong people to make a house, and the threat was backed up by a love for the good of both of them. They were a team; and enough was enough. He listened, and Rose, I believe to this day, won’t eat canned salmon.

I could go on and on. I will with the other stories as I write them down.

I was sad to get the call from Rose on October 13th; my heart had been aching to get down to see him, warning me of the impending, but a flooded basement one weekend, and other issues kept me from making it down a final time. Our last visit was capped with him saying two great things to me.

First, that if I’d been a few years earlier, we could have had some great times on the road and he would have enjoyed working with me. What a compliment, considering he’d only seen me wrestle once in Vegas 15 years ago.

Secondly, and far more warming, he said “Tell your lovely wife I’m sorry to keep you late, but I’ll gladly do it every chance I get.” We hugged, exchanged words of endearment, and I said I had one more thing to tell him.

I’d told him I dreamed he was healthy and I’d visited him at home, and hoped to see him there soon. We talked about that too, and although the conclusion wasn’t as we expected, or hoped, perhaps that dream came true too. He’s joined the great wrestling ring in the sky, although he’s probably stopped to do some fishing and hunting along the way.

In a world of carnie wrestlers and pretend bad-asses, Leo was the reality that so many strive to be. He was tough, he was talented, he was respected, and he was forever redefining the excellence that people strive for as “Pro Wrestler.”

He was as good as he could be and his reality surpassed the hype. Soft-spoken, warm, genuine, and unbelievable at the same time. His parting request was that young people get involved in church or charity or service to see what the world is like and to improve it. Care for nature, respect it, and embrace it. And try to be more, do more, and if you see something that interests you, go for it.

Leo’s storied life went from being a state champion at fast-drawing pistols, to the navy, to wrestling, to Judo, to scuba, and to co-founding Candive in North Vancouver. He never stopped learning or striving.

The world is a great big ocean, and you should be able to find at least one oyster in it.

Rest in peace to my good friend and hero Don Leo Jonathan. I love you and will miss you always; I hope someday we do get that match.

Ben Nelson wrestled under the name Bomber Creed. He’s the author of the very funny book about his life as an indy wrestler, titled You’re Gonna Hurt Yourself: Daydreams. Dead Ends. Professional Wrestlers. For more on the book, visit wrestlingtales.com.