There’s really only one word to describe this week’s episode of the Mae Young Classic: destructive. But hey, it only makes the matches more entertaining for the rest of us, right? The bout of the night, however, was awarded to Toni Storm and Mia Yim.

Both of these women had a similar strategies going into the event. Yim, the martial artist and striker was going to focus on destroying Storm’s back. She did everything from attempting to turn her body into a pretzel with a back bridge to hard-hitting kicks to the small of the Aussie’s back. Storm had another idea in mind, which inevitably gave her the win.

Yim having her hand taped up was like a target for Storm. She bent the injured hand of the Blasian Baddie with all of her strength. Yim screamed in pain, clearly distracted her from striking back. This left an opening for Storm, who performed a Storm Zero and pinned Yim for the win. The youngster will now face the legend and one of the most sought-after women in wrestling, Meiko Satomura.

It was truly heartbreaking to see Tegan Nox clenching her knee in pain, which forced her to leave the ring. It’s always crushing to see the athletes injured when you know they’ve worked so hard to get to where they are. Every person in attendance just stopped and stared at the ring in shock. I wish Nox a quick recovery and hope to see her in next year’s tournament. She is a great competitor with so much potential and I am certain will do great things.

We are almost at the end of this journey. Next week we enter the semi finals with some heated bouts that I am confident that it will be as much of a arduous and demanding event as this week’s. This is the time leave everything, mind, body and soul, in the ring. 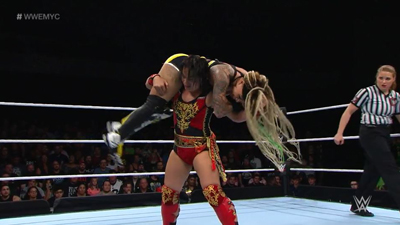 Lacey Lane certainly had a long, gruelling match ahead of her. With only a year of in-ring experience under her belt, this is one she could only dream of. The Dudley Boys protege attempted to keep up with Meiko Satomura but it proved to be a difficult task. The Japanese veteran’s powerbombs and high kicks are just too much to handle. The Death Valley Driver cemented Lane in to the hard mat and gave Satomura the win to move on to the semi finals. 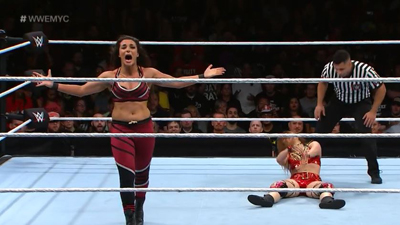 This was a tale of two great wrestlers who are willing to do whatever it takes to get to the main stage at Evolution. Io Shirai started with a high-flying suicide dive and took out Deonna Purrazzo, making both of them land on the metal flooring. This was the most physical performance I had seen in both of them from the start of this tournament. Shirai showed all the skill, talent and athleticism needed to win this tournament. The young Japanese earned her way to the semis with a back flip off of the top ropes and pinned Purrazzo for the win.

These two grapplers do not like each other in the slightest. This and Rhea Ripley’s “take no prisoners” attitude is a recipe for a blood bath. Tegan Nox’s immediate suicide dive to the ringside floor made her favour her knee, which she had injured just a year ago. I wasn’t surprised that Ripley did not care one bit and continued to lay her out. The match had to be stopped when the Aussie powerhouse kicked Nox in the face, making her land to the mat and grabbing the injured knee. Because Nox could no longer go on, Ripley will advance to the next round. 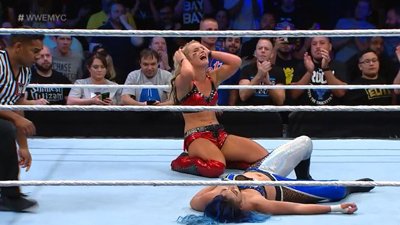 Toni Storm is overcome by her win. Photo: WWE.

The self-proclaimed right knee from down under, Toni Storm wasted no time and threw Mia Yim around the ring. Yim was at a bit of a disadvantage with the hand still being taped up, but she managed to make a bridge out of Storm’s back. Then, out of nowhere, Storm smashes her head against Yim’s. No one wins there I’m sure. The Australian managed to keep her momentum and pulled off a Tiger Driver, a.k.a, a Storm Zero and pinned Yim for the win.