Long-time promoter Jim Barnett gave Dick Slater the name of “Mr. Unpredictable,” and the big Floridian thought it fit him like a glove, in and out of the ring. “You never knew what I was going to do in the ring — that was the deal,” said Slater, who died today at age 67. “If you wrestled the same style every single night, people would get bored watching you. Me, I’d change. I’d be completely different one night and completely different the next.” 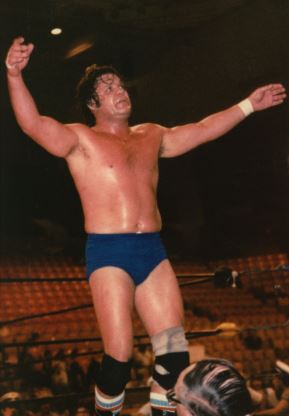 Slater was at his unpredictable best in the 1970s and 1980s, earning status as one of the top heels in the business. “Dick Slater was a great heel … Tough, tough, tough guy,” Mid-Atlantic star Don Kernodle recalled. “Not a wrestling tough guy, but a fighter. He wasn’t a great shooter in wrestling, but he would knock a great shooter out before he knew what hit him.”

In fact, Slater was considered world championship material at one time because he could work a variety of styles and defend himself in just about any situation. But, according to Slater in The Pro Wrestling Hall of Fame: The Heels, Charlotte, N.C.-based promoter Jim Crockett insisted that Ric Flair hold the National Wrestling Alliance championship strap, and that was that. “I couldn’t fight politics, so I just went along with the flow,” he said. Slater played off the decision, though — in 1984, he had his own world championship belt made and strutted around the Carolinas as kingpin, touching off a program with Flair.

Richard Van Slater wasn’t much of a pro wrestling fan growing up in Florida, but he was into amateur wrestling and football big time. He went to Robinson High in Tampa, where a fellow student was Mike Graham, son of Florida wrestling promoter Eddie Graham. Slater started on the mats in the Amateur Athletic Union — training with professionals like Hiro Matsuda and Bob Roop to improve his skills — and landed at the nearby University of Tampa, where he again wrestled and played football. “I’d go to football practice in the afternoon and wrestling practice at night. That was a tough life.”

Slater got to know wrestlers like Paul Orndorff and Dick Murdoch, though, and had his first pro match in 1972 — his choice of careers was pretty much forced on him when Tampa announced it was dropping football because of cost and academic considerations after the 1974 season.

He estimated that it took him about three years to be fully comfortable in the ring, but when he did, Slater racked up a pretty impressive resume, with more than two dozen singles and tag belts to his credit, some of them multiple times. His first tag title came with Dusty Rhodes in 1973; 22 years later he won the WCW tag title with Bunkhouse Buck (Jimmy Golden). His preferred stamping ground was Georgia, where he was state champ four times in battles against Mr. Wrestling II and Paul Jones. 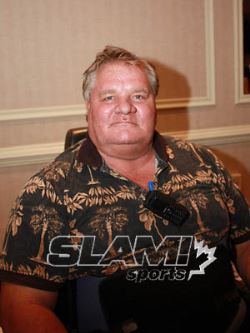 Dick Slater at a fan fest in 2010. Photo by Christine Coons

It was Jones who took Slater under his wing, family connections meaning as much as the obvious potential. Jones, who also died earlier this year, made Slater an “honorary Texan” and shared the story with Barry Rose of the Facebook Florida Championship Wrestling website in January 2014. “This guy was a natural. He caught on so quick, so I pushed for him and made him my protégé. It got heat on me and everything to dictate to him and chew his ass out on TV (laughs). I made him my partner and the guy just took off. He became a great worker. I don’t know what happened to him, but after I left Florida he started imitating everything Terry Funk did. I called him up one time, and said, ‘Dick,’ I says, ‘Shit, be yourself. You were great when we were together. Screw Terry Funk. That’s Terry Funk, that’s not you. When you do it, it makes you look like a comedian.’ He never bought what I was saying and if he was still wrestling today he’d be having a Terry Funk match. Another reason I took in interest in Dick was his wife at the time, Sandy, was the sister of my wife. As far as I’m concerned he’s still my brother-in-law. We used to ride together and he would get a case of Boone’s Farm wine. Yeah, he’d get twelve bottles and by the time we got back from Miami to Tampa he would drink all of them.”

The Dick Slater and Bob Orton Jr. pairing was one of the best in the south in the 1980s, as well. “Orton and Slater was a hell of a tag team,” said Greg Valentine. “They never went up north, but they were great. Bobby Orton when he was younger — his kid is just as good, if not better because he looks better. But Bob Orton, Jr., my God, he was great. He and Slater, one time had the greatest tag team I’d ever seen.”

“Dirty” Dick Slater had the ability to work and modify things in the ring. “I wrestled as a babyface the same as a heel. It was the same style; I never changed anything. I could adapt,” Slater said.

It also was easy to see flashes of Terry Funk’s style in Slater, maybe too much so for promoter Bill Watts. “I think Dick Slater was an awesome heel, then he got infatuated with Terry Funk and started copying Terry Funk,” Watts said. “He would walk like Terry Funk, he would act like Funk in the ring. That’s not how he started out.” Still, the bond was pretty much unbreakable — Slater and Funk lived together for a while, teamed up in Japan, and even helped coordinate stunts together for Rocky V.

Funk wrote about Slater in his autobiography. “I lived with Slater while I was there [in Florida], for several months of insanity,” Funk shared with co-writer, the late Scott Williams, launching into a story of trying to get some publicity by pretending to wash up on shore near death.

Later, Funk talked more about Slater: “I’ve heard from a lot of people over the years that I had a big influence on Slater’s wrestling style. Well, Slater wore trunks like me, but there wasn’t anything wrong with that. As long as I knew Dick Slater, he worked like I did. He worked like me before he ever saw me. We just had a lot of the same ideas about what would get over. We became good friends, and I don’t think he changed his walk or anything for me. I think he walked like a goof, because he was half-goofy, and he did some pretty wild things.

“Hulk Hogan once told me the first time he ever saw Dick Slater was on Clearwater Beach, Florida. Slater had a cat by the tail and was swinging it around over his head while running down the beach, according to Hogan, and the cat was on fire.”

Slater also booked for Watts, Joe Blanchard, and Paul Boesch in Texas and surrounding states, but that wore him out quickly. “I got so brain dead I had to go down to the [Florida] Keys and go fishing,” he said. 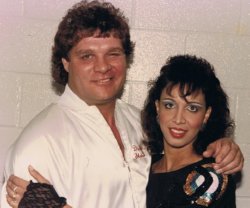 A controversial angle involving a white man and a black woman perked up things when Slater met Linda Newton in an Atlanta nightclub and got her to be his valet — named Dark Journey — in Watts’ Texas-Louisiana promotion. “I got stalked. We got stalked. They were following me out of the arena and into the car. But we drew good money with that.”

In a 2012 interview with SLAM! Wrestling, Newton talked about Slater bringing her into the business, but not warning her what she was getting into; with the passage of time, she was could say that the experience was memorable at least. “He would just basically take over the whole show and I wouldn’t be able to say anything, he’d knock me out of the shot,” she said. “And I’m not trying to put Slater down. Slater was a sweetheart, but I’m just calling it how I see it.”

Slater also worked for the WWF for about a year in 1986 and 1987 as “The Rebel” and WWE acknowledged his passing on its website today. After wrestling a brutal stretch of more than 100 nonstop days with WWF, Slater quit and returned to Florida. “Dickie was a paradox, really. He was just a big raw-boned, tough guy,” said former NWA referee Tommy Young. “He was over well, a good heel, a good work ethic, a good interview, but he’s had a lot of personal problems.” 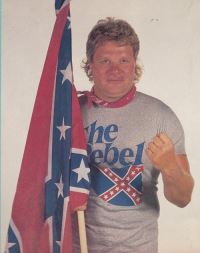 Part of what also held Slater back was a series of serious back ailments that caused him pain. “Had it not been for the back problems he experienced, no telling what heights he may have hit,” said Sir Oliver Humperdink years back, who knew and managed him in Florida. Slater went through almost a half-dozen operations for ruptured vertabrae and suffered from flat-back syndrome, loss of curvature in the lower back. He had been a nursing home for the last few years, unable to take care of himself until his passing on October 18.

All that hard living, keeping up the “Mr. Unpredictable” lifestyle, was not a gimmick.

Florida veteran Bob Cook enjoyed watching Slater perform before he got into the business himself. “He was wild crazy and off the charts nuts and one of wrestling’s legitimate tough guys,” wrote Cook on Facebook after learning of Slater’s death. “I had the honor of being around Mr Slater a lot in the ’80s and ’90s. He was always super cool to me personally and one hell of a blast to work with in the ring. Rest in Peace Dick Slater may you finally find the peace you searched for here on earth forever in the afterlife.”

Slater had a contentious relationship with Gertrude Hurd, better known to wrestling fans as Angelle Vachon and Luna Vachon, just as Vachon was breaking into the business. Promoter Howard Brody didn’t pull punches in recalling Slater in a Facebook post: “[I]n life, he was a miserable human being. If he was your friend, I’m sorry, but I cannot sugar coat what he was. He was an abusive individual who took out his own frustrations and short comings on others, including the late Luna Vachon. While Luna might not have been a saint, she did not deserve to be beaten by a man who today many are giving praise to. If not for Tom Nash, and this will probably be the only time I ever say something nice about that guy, there is no doubt in my mind that Luna would’ve suffered the same fate as Nancy Benoit.” 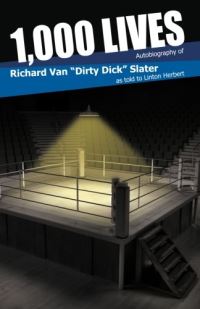 Years later, in 2003, Slater blamed his pain medication for a well-publicized altercation that lead to his conviction for stabbing an ex-girlfriend. He was sentenced to one year of house arrest, as well as two years of probation. In 2013, he was arrested for petty theft.

His autobiography, which came out in 2012, was titled 1,000 Lives: Autobiography of Richard Van “Dirty Dick” Slater and it was a lot like him, unpredictable from page to page, a bit of a hot mess, but entertaining nonetheless.

In the conclusion to the piece on him in The Pro Wrestling Hall of Fame: The Heels, Slater said that despite the pain and turmoil, “I wouldn’t change it for a million years. I had some great, great years wrestling.”

– with files from Steve Johnson