Baseball and professional wrestling make interesting bedfellows, as evidenced Sunday night, as Johnny Impact invaded the Rogers Centre to throw out the first pitch at the Toronto Blue Jays game, and, later that night, as Jays outfielder Curtis Granderson came to the Impact Wrestling Slammiversary pay-per-view in town. Both athletes talked with SLAM! Wrestling about their experiences. 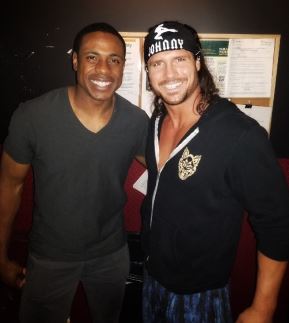 First up was Johnny Impact, also known as “The Mayor of Slamtown,” Johnny Mundo, Johnny Morrison, Johnny Nitro, and, as his parents named him, John Hennigan.

Heading to the mound in a major league ballpark meant that Impact “crossed that off the bucket list.”

“I’ve always wanted to,” he explained after his return bout in Impact Wrestling, beating Petey Williams, Fenix and Taiji Ishimori in a wild opener. Johnny Impact had mentioned it to Impact Wrestling’s public relations people and a few others, but isn’t positive how it all came together. “I’m not sure if they reached out to Impact or Impact reached out to them, but it ended up working out in my favour.”

Impact has been away from wrestling, taping the CBS series Survivor, and recently got married to fellow wrestler Taya Valkyrie. He didn’t get much of a chance to improve his pitching.

“The first thing I did was YouTube botched first pitches. Why? I don’t know. Just to make myself nervous I guess. Why would I do that? I don’t know. 50 Cent threw a real crap pitch, a bunch of people did,” he said. “Aside from that though, I didn’t really prepare at all until the day of, because I’ve been so busy. I just kind of warmed up, played catch with the mascot for a minute or two, and then that was it.”

As you can see in the clip, courtesy the Toronto Blue Jays’ Twitter feed, Impact wasn’t high and outside as much as really high.

The Mayor of Slamtown took this first pitch down!

Thanks to @TheRealMorrison for joining us at the ballpark! pic.twitter.com/0reI8QmdKl

“I think it went really well. I was telling people I threw a wrestler’s strike, maybe like an ’80s wrestler’s strike, because it was right down the middle, maybe a little bit high, but if Andre the Giant was at bat, that would have been a strike for sure,” he joked.

Granderson offered Impact some thoughts. “I told him, ‘Hey, I’ve thrown out two first pitches in my life, and I’ve bounced one, so it’s not the easiest thing to do.’ He goes, ‘Man, I felt so nervous out there.’ I go, ‘But you made it, that’s the big thing, so no one can ever take that away from you.’ So he was highlighting about it today, and it’s still going to be something that he remembers until he dies.”

Likewise, Granderson is going to remember his role in Sunday’s Slammiversary show. He was tasked as being the keeper of the Impact World title, as Austin Aries defended — successfully as it turned out — against NFL football player turned wrestler Moose. During the main event bout, Aries stole the belt from Granderson, intending to use it as a weapon.

“He came in, took it from me. It wasn’t supposed to happen,” said Granderson. “Had to go ahead and get it back from him. Then he ended up going ahead and getting the victory to claim back his title. I tried to do what I could to help Moose do what he could, but he ended up falling short to a great champion.”

Granderson isn’t exactly objective; Moose is his guy. “How can you not cheer for Moose? He came in, the crowd was pumping, you had the first pump going, everything’s good. The size, you’ve to take the big guy, you’ve got to take the big guy. But proved tonight that never forget that the little guy can always come up big.”

Like Impact was at the mound, Granderson admitted to being a little out of his element. “You know, the hardest part was trying to figure where to look and where to be at, and it’s funny because it’s the same thing that we do. We have the lights on us, we have the fans on us, everyone’s paying attention to you, and you don’t want to slip and fall. That’s the big thing. Just like you do on a baseball field, you don’t want to slip and fall.”

The 37-year-old outfielder, who looks 10 years younger than that, brought Jays pitcher Joe Biagini to Slammiversary. Biagini had zero experience with pro wrestling, so Granderson relished the opportunity to share his love.

“So he’s like, ‘What am I going to see tonight?’ I was trying to explain it to him, and sure enough we came in for Tommy Dreamer’s match. I go, ‘Um, this is kind of like a good intro, so pay attention to this one,'” chuckled Granderson. “Sure enough, here comes a staple to the head, and that was his first introduction to wrestling. He goes, ‘Man, I think I might become a fan of this’ — not because of that, but because of the fans, because of everything else that you got a chance to see.”

Asked about the appeal of pro wrestling, Granderson said it’s not just one thing. “I think it’s a combination of seeing all ages represented, all diversities are represented, old and young, male and female, the energy, the pyrotechnics, the music, the choreographed moves, along with the impact, the noise, the sound, how the crowd reacts. I think it’s a combination of all that.” Booker T is his favourite of all time.

Granderson really became a fan when former Detroit Tigers teammate, first baseman Sean Casey, introduced him to some of the wrestlers that he knew. Through time, Granderson got into it more, and appeared at TNA Wrestling’s Slammiversary in 2009, where he was the keeper of the title for the X-Division King of the Mountain match at the The Palace of Auburn Hills in suburban Detroit.

He has a lot of respect for what the wrestlers do. “They’re on the road just as much as we are. They’re going from city to city, hotel to hotel, traveling. It’s a combination of minor leagues and major leagues all wrapped up into one. And they’ve got to come out and perform every night, just like today is the first day of the season,” said Granderson. “They do an amazing job of keeping themselves in tip-top shape to be able to go out there. I got a chance to see some backstage stuff, and guys icing up, guys with bandages, guys trying to stretch and loosen and get ready for their match beforehand. All things that we have to go through that a lot of people don’t get a chance to see in the backstage.”

Mat Matters: Slammiversary a mix of old and new for me