Mat Matters: Slammiversary a mix of old and new for me 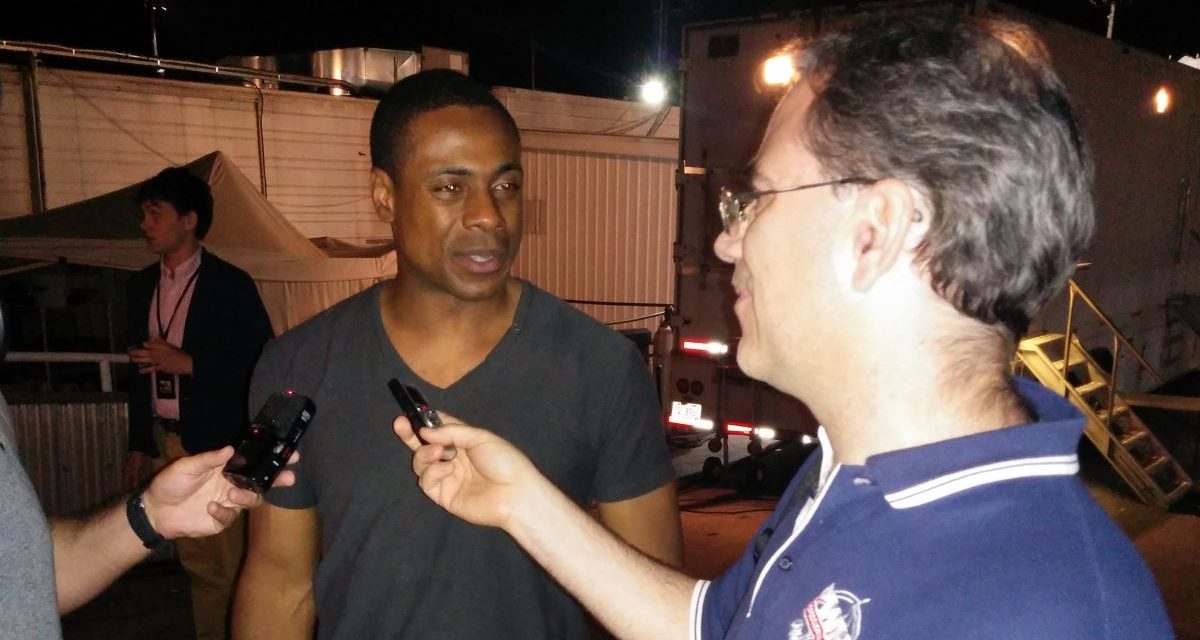 TORONTO – When I look at a lineup card these days, it’s inevitable to do a mental checklist: interviewed him; talked with her on the phone; sat in a bar with him. Sunday night’s Slammiversary pay-per-view in Toronto was no different, but it’s the unexpected interview and other moments that rewards me for leaving the house.

Being somewhat old, I still put a lot of stock in personal relationships, meeting people face to face. Saying hello and having a quick chat can mean far more down the road that seeing a bout in the ring.

When Impact Wrestling had its press conference in early June in Toronto to promote Slammiversary, I got to meet the company’s hard-working press agent, Ross Forman, in person for the first time. I later told him that it would have been the highlight of the day for me to finally meet him face to face, had I not gotten a hug from Gail Kim, who I saw wrestle under a mask in her first matches as La Felina.

So come Sunday night at the visually-dizzying REBEL Entertainment Complex down on Toronto’s waterfront, I got to see Forman again hustling around, doing his job and apparently another dozen or so as well.

Fortunately, one of his gigs was to help the press, which included a good row of seats for us to sit, finding spots for ace photographers Steve Argintaru and Mike Mastrandrea to shoot, and getting Blake Murphy of The Athletic and I a chance to score a couple of sports-related interviews.

First we sat with John Hennigan, who is at various times, Johnny Impact, Johnny Mundo, John Morrison and Johnny Nitro. He threw out the first pitch at Sunday afternoon’s Toronto Blue Jays game, so part of the talk was about that. (See that story.)

Then, after the show, I found myself with Murphy talking with Curtis Granderson of the Toronto Blue Jays about his love of pro wrestling and how that dastardly Austin Aries stole the Impact championship out of the beltkeeper’s hands. Of course, Granderson prevailed (more than we can say for the Jays these days), getting the belt back — as did Aries with the main event win over Moose.

During the interview periods, and pre- and post-show, I got to say hi to a lot of people I knew, whether they were on the show on not. Santino Marella, Rob Fuego, Michael Paszt, Derek “Robbie MacAllister” Couch, Ronnie Gaffe, Josh Alexander, Pepper Parks, Nick Andrew and many others got a hello or more.

Stu Stone is a guy who I’ve met but never really talked at length with, and we got to last night, even at the expense of seeing much of the show. He’s a TV and movie guy, worked with Dave Marquez at Championship Wrestling From Hollywood, and has been spending tons of time in Los Angeles, so it was a good time to talk in person. From the CWFH days, he also knows some of the Impact crew, and Eli Drake (Shaun Ricker) stopped by for a lengthy (off the record) conversation.

Stone and I both talked about the pride we feel in seeing people we have known a while succeed, like Drake or Brian Cage for him, or Allie / Cherry Bomb and referee Harry D for me. Plus, see Scott D’Amore running the show on such a big scale compared to his always great Border City Wrestling shows was fascinating; good on ya’ Scott.

When I finally got back into the crowd, it was as things were escalating for the Sami Callihan- Pentagon Jr. Hair versus Mask match. The crowd at REBEL by that point was more than a couple of drinks in, and were rabid and passionate, reveling in yet more weaponry and chaos. It was pro wrestling at its best, the emotions of the wrestlers and the crowd mixing for a euphoric ride as the story played out with its inevitable conclusion of Callihan getting his head shaved.

Truthfully, the main event had a really hard act to follow in that. Moose did his darnedest to prove that he belonged in the spot, a place that Austin Aries knows 100 per cent that he should be in. But again, a lot comes down to people you know, and when Moose and Aries did a crazy spot into the crowd, I knew the security guys in black shirts, local wrestlers, who were the ones that caught Aries.

Speaking of local security, not on camera was relative Impact Wrestling newcomer Kevin Kross, who I got to know a bit at the Cauliflower Alley Club reunion. It turns out that he lived in Toronto for years, pre-wrestling, and was actually a bouncer/security at REBEL when it was called The Docks. He chuckled at how life can take you full circle sometimes, and he was looking forward to showing his in-ring skills to a few people who knew him then at the TV tapings Monday and Tuesday at REBEL.

As for REBEL, I can see why Impact Wrestling likes it as a venue. It is big enough to get lots of people in, yet small enough that they aren’t lost in it. The surrounding balcony adds a different feel, both to the show and to the photos from Mike Mastradrea. I didn’t like the “snow” on the sides, the videoscreen that continually rolled, distracting aged eyes; no idea how it played out on TV, or if it did. Regardless of what I think, Impact returns to Toronto for more TV tapings August 12 and 13. It was also announced that Bound for Glory will be held in a similar venue, the Melrose Ballroom in Queens, NY, on Sunday, October 14. 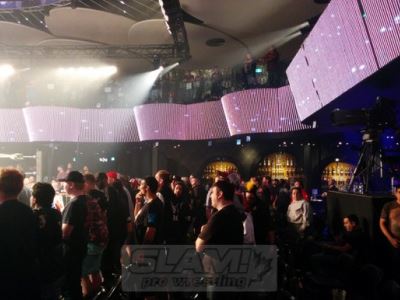 A shot of the “snow” on the side videoscreens.

So back to my scorecard, when Forman asked me who I wanted to talk to, the only names that I could think of that I had never interacted with, that were of off-the-top of my head interest to me, were Pentagon Jr., Fenix and Taiji Ishimori. Alas, with no knowledge of Spanish or Japanese, those interviews didn’t happen. Maybe one day.