NXT’s monster, Lars Sullivan, faces his greatest challenge this weekend. At Takeover: Chicago II he battles NXT Champion, Aleister Black, for the title in what should be a ruthless contest. This will be Sullivan’s first Takeover main event showing, first match for the NXT Championship and Triple H has every confidence that he will surpass everyone’s expectations. 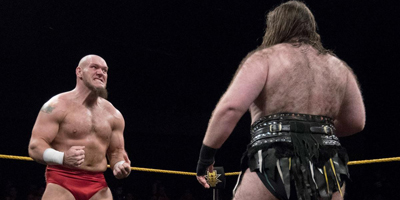 “In my opinion, he always hits a home run or some variation close to that. It is why we are putting him in the position he is in. I expect him to succeed. This is one of those things I find that when you take a talent and give them a responsibility that you think will be slightly passed them they overachieve and surpass your expectations. He has done that so far every single time. I expect him to go in a monster. I expect him to come out a bigger monster,” said the WWE’s Executive Vice President of Talent, Live Events and Creative and the senior producer of NXT.

In the conference call, HHH called Sullivan a “unique hybrid” who should not be compared to Braun Strowman as they may be the same kind of persona but their ring work and the way their characters are presented are very different.

“I think the sky is the limit for him. He is going to hit it out of the park. He is ready for it,” HHH said of Sullivan and his Takeover match. 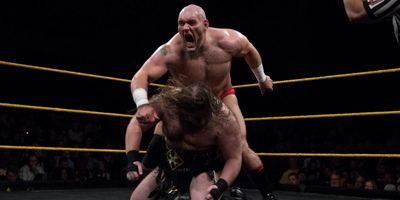 On the current NXT roster there is a healthy mix of veteran superstars who have wrestled all over the globe such as Adam Cole, Ricochet, Bobby Fish, Kyle O’Reilly and Roderick Strong as well as relative new-comers such as Sullivan, Velveteen Dream and Tyler Bate. HHH says that balance is an integral part of the growth process for any member of the NXT roster.

“If you take Lars Sullivan and you are just working him in a place where he is the best guy there, he has done growing. He has got to be moved up to a place where he is not the best guy. He is underneath some other guys who are stealing the show and it is pissing him off and he is going to go out there every night and figure out a way. A lot of this comes down to the talent, their desire to be better, their desire to do more,” he explained.

As the guiding force of NXT, HHH takes the growth of every superstar very personally.

“If any of those guys, two years from now, are the same performer they are right now, than I failed,” he said emphatically.

During the call, HHH took the time to address some outstanding issues, one being the physical condition of Ricochet who is set to meet Velveteen Dream at NXT Takeover: Chicago II. Recently, Ricochet landed awkwardly at an NXT event in Paris, France. The official supervising the match even went as far as to throw up the dreaded “X” symbol to signify a serious injury but Ricochet returned to the ring to celebrate with Johnny Gargano later on in the show. Since then, Ricochet has been absent from in-ring competition. 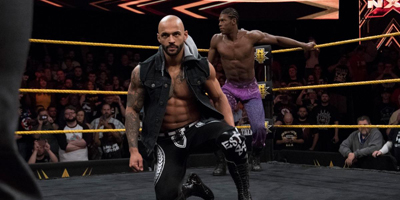 “He tweaked himself a little bit in Paris. He is not injured. We just don’t want to take a chance with it. The one thing with athletes is these guys and girls are thoroughbreds and somebody has to pull the reins on them,” said HHH giving his update.

A situation that has fans somewhat confused is the Authors of Pain and their move to the main roster. The titanic tag team effectively fired their mentor Paul Ellering once they debuted on Raw and since then the mastermind behind the Road Warriors has disappeared from all WWE programming. Many insiders claim it because Ellering didn’t want to work a full-time schedule. As HHH explains it, the door is open for Ellering to return to NXT in the future.

“I loved what Paul did for us in NXT. I loved him being part of the brand. He was great to have around. He really did add something to AOP as characters. He added credibility but he also added something backstage,” HHH clarified saying that when a suitable role is available, Ellering would be welcomed back to the NXT fold.

Another curious subject is what Shawn Michaels said during a recent interview with SkySports. Michaels, an NXT trainer, stated that he would consider having another match, if the situation presented itself in the right way.

HHH, who is a close friend of Michaels, didn’t have much to add to the statement other than Michaels is the kind of superstar that rumours and gossip swirl around and that he will be attending the United Kingdom Championship Tournament later this month. The tournament airs on the WWE Network on June 25th and 26th.

“The only way to get an answer to that is to ask Shawn himself,” said HHH of the “one more match” rumour.