The new documentary on Andre the Giant from HBO comes out on April 10, but it debuted on Thursday night in Los Angeles, with plenty of celebrities on hand, including Triple H. On a conference call with media on Friday, he raved about the film.

Triple H, actually Paul Levesque, Executive Vice President, Talent, Live Events & Creative, began the call by apologizing for being late, in part because he had flown back from L.A. to Connecticut after attending the premiere with his wife, Stephanie McMahon. 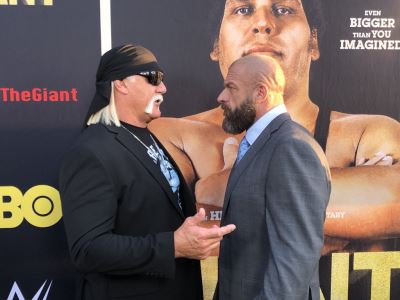 Hulk Hogan meets up with Triple H on Thursday, March 29, 2018, in Los Angeles, at the premiere of the HBO Andre the Giant documentary. Twitter photo

It’s been a “busy couple of days around here,” he said, jumping to the movie, appropriately titled Andre the Giant, which he called “incredible.”

The documentary about the famed Andre Rousimoff, who died in 1993, is directed by Jason Hehir and is produced by Bill Simmons. WWE was also involved, which meant access to footage that would normally be unobtainable for most filmmakers.

When Dave Meltzer of The Wrestling Observer Newsletter got on to ask a question, Triple H cut the writer off, and commended his part in the documentary.

“Congratulations on the Andre doc,” Triple H told Meltzer. “I thought you were phenomenal in it. I thought you added some great insight, and I really thought it came out well. I was very happy with the level of respect that both the industry in general and Andre were presented in. I felt like it was very well done.”

Triple H said that he was looking forward to Meltzer’s take on the film.

“It’s something special,” said Triple H. “Anybody that’s a fan of what we do and Andre, even my wife, who was friends with him her whole childhood and everything like that, there was a lot of stuff in there that she didn’t know. It’s a really fascinating look at, just in every single way possible, a larger-than-life man.”

His wife, Stephanie McMahon, tweeted her take after seeing the film: “I just saw the #AndreTheGiant documentary and was blown away. There was so much to his story that I didn’t know and I’m so grateful to @HBO @BillSimmons the team @WWE and everyone involved for sharing it with the world. Tune in to HBO on April 10th at 10PM EST!”

Writer, podcaster and filmmaker Bill Simmons tweeted out his appreciation to both Triple H and Stephanie McMahon: “Thanks to @TripleH @StephMcMahon and everyone else from @wwe for coming to our big #AndreTheGiant world premiere in LA last night! Very happy for my man @jasonmhehir who made a fantastic film – seeing it with a huge audience was f-ing cool. APRIL 10 HBO”

On the conference call, Triple H did not bring up Hogan. WWE issued a statement prior to the event stating that Hogan was an important part of Andre’s life, but his being there did not mean that fences had been mended and that he was once again a part of the WWE family following his racist comments were made public from a sex tape.