KITCHENER, ON — Attending a WWE show in the front row for the first time gave me a new appreciation for the WWE live experience that I was unable to get when I sat further back at other WWE events.

I have been a big WWE fan since childhood and would attend WWE live events whenever they came to town. However, at the previous WWE events I was always many rows back on the floor, or up in the stands.

I always missed the little aspects of matches because I was far away from the action. At the WWE live event in Kitchener at the Kitchener Memorial Auditorium, I had front row seats. I’ve had ringside seats to independent wrestling promotions so I was curious how the WWE would compare to my other experiences.

Every wrestler on the WWE Raw house show had great fundamentals, which some independent wrestlers at great promotions are lacking. My previous WWE experiences, far away from the action, lacked an appreciation of the fundamentals that the wrestlers displayed since I could not see the details in the ring. 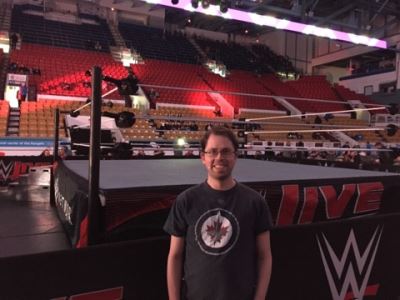 Don Davies at ringside for the WWE Raw house show in Kitchener.

The ripple effect where a heel wrestler picks on one fan who voices their displeasure spreads to the rest of the crowd with almost everyone booing is used by many wrestlers. The Miz gave a dirty look to someone in the front row and the ripple effect spread over the whole arena. In other shows when I was far away from the action it was sometimes hard to tell why everyone suddenly started booing a heel. Front row seats gave me a new appreciation for how the WWE wrestlers worked the fans.

Security would tell the adult fans to back up and sit down. However, the next match the same adult fans would rush the barricades to push children out of the way to interact with the wrestlers.

The lack of security was a theme throughout the night. I waited over 30 minutes to enter the building since there was only one security guard at each entrance. The arena was fairly empty during the first match, likely due to the large line up to get through security. After the first match, the building filled up quickly.