COLUMBUS, OHIO – As many are billing 2018 as “the year of the woman”, it was fitting that Ronda Rousey — one of the most dedicated female athletes in modern history — was the headliner at this year’s International Sports Hall of Fame induction ceremony, which took place in Columbus, Ohio, as part of this past weekend’s Arnold Sports Festival USA (“Arnold Classic”), the annual sports, fitness, and bodybuilding expo named for its founding member, Arnold Schwarzenegger. 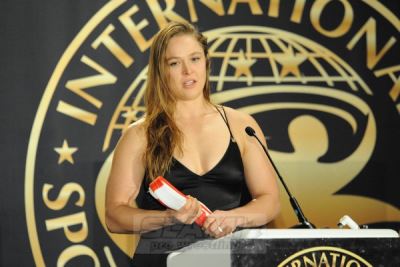 Ronda Rousey at the podium during the International Sports Hall of Fame induction ceremony. Photos by Mike Mastrandrea.

Before the actual ceremony, hosted by Dr. Robert Goldman, the event kicked off with a special presentation of black belts for the mother-daughter combination, with De Mars earning her seventh degree belt and Rousey her sixth. When presented with her belt, De Mars noted that when she was starting out in the sport, women’s belts featured a white stripe, “because a women’s rank wasn’t as good as the men’s.” De Mars refused to wear a striped belt, and eventually that rule was changed, in no small part because of her pushing for the change. Rousey thanked her mom for leading that charge — though she did note with a smile that when she was young, she thought the white stripe in the belt was a fashionable look. “But once I learned what it meant, there’s no way I would wear one now.”

The induction speeches that followed were similarly as inspirational and poignant.

Rutten inspired with his speech, noting that he owed thanks for his successes to God, to his parents who instilled in him a strong work ethic, and to his bullies who inspired in him a spirit to fight back. He then encouraged the attendees to fight against the bullies in their own lives — but not just bullies who are people, but the emotional and psychological bullies in their lives, negative emotions like jealousy and anger that only serve to beat you down in life.

Up next were Terry and Jan Todd, two pioneers in weightlifting and strength competitions, and they spoke about having to break down misconceptions about those sports in their early days. Terry recalled how skeptics dissuaded him from promoting the sports, suggesting that bodybuilding would ruin peoples’ physical, mental, and emotional health. “They were full of s***,” he cracked.

Jan noted that similar challenges faced her as a woman in what was considered a man’s sport. “They were… well, I won’t say what my husband said, but they were wrong.” The two also gave props to two of their most celebrated trainees, Bill Kazmaier and Mark Henry, noting that Terry was initially reluctant to let Henry even compete in the World’s Strongest Man competition that Terry founded . “Because Vince McMahon was billing him as the world’s strongest man. I said, ‘What if you come in third (in the competition)?’ I told him I’d only do it if Vince okayed it. He did, and Mark managed to win. And to his credit, he comes back (here) on his own nickel every year — or is it Vince’s nickel?” (Prompting Henry to yell out “It’s mine!” which had the crowd laughing.) “OK, his own nickel, to come back and pay honour to those who gave him those chances.” 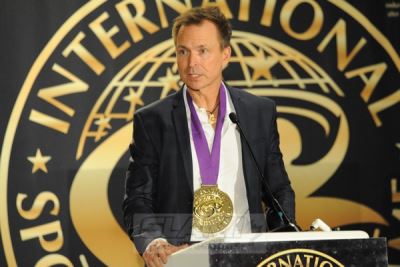 Honouring stars of the past was exactly what Phil Keoghan, most famous for hosting TV’s Amazing Race, was inducted for. To honour a fellow New Zealander, Harry Walston, who was on one of the earliest Tour de France competitors, Keoghan made a documentary wherein he recreated Walston’s 1928 ride using an era-appropriate bicycle, including with no gears. “On average, these guys were riding hundreds of kilometres a day. One day, I rode for almost 23 hours… I was hallucinating. I wanted to share (Walston’s) story, so one day he may get this kind of same honour as I am getting today.”

Rousey’s speech, which is transcribed in its entirety, served to give people advice on how to live successfully:

I was thinking a lot about my mom and how she helped set my moral barometer. She always told me to “do the right thing.” And it sounds so simple.

I know I’d probably have a lot more money and be a lot more liked if I didn’t always do the right thing. But no matter how many likes you have on Instagram or how many zeroes you have in your bank account, it can’t buy you a good night’s sleep.

So all of the people here who are already great successes, you don’t need advice from me on how to become successful. My advice to you on how to be a success is to, every single time you’re faced with a difficult decision, do the right thing.

Arnold Schwarzenegger, the former governor of California, concluded the event by congratulating all of the inductees and thanking them for their contributions to the advancement of fitness and sport, and especially as it relates to women’s competitions.

“We’ve been doing this for 30 years now,” Schwarzenegger said proudly, “and it’s always a great event. In 1970, (we…) decided to go on a fitness crusade, a bodybuilding crusade, to promote bodybuilding and fitness. And we started that in 1976. It’s quite wonderful today to see around 250,000 people coming through to see nearly 21,000 athletes — more than half of them female athletes — competing in about 78 fitness sports. Basically, it means that our crusade has been very, very successful. (You honourees) are part of this crusade. Thanks to every one of you for your efforts.”

Bob Kapur has never felt so inadequate as he did while walking around a room full of jocks. E-mail him some ego-boosting compliments at [email protected]