Brian Pillman is remembered in so many ways. He was the kid who overcome cancer, the local high school football hero, the unlikely college All-American football player, NFL teammate, high-flying pro wrestler, outlandish and off-kilter maniac on the microphone. So it makes sense that someone would (finally) write a book on him. 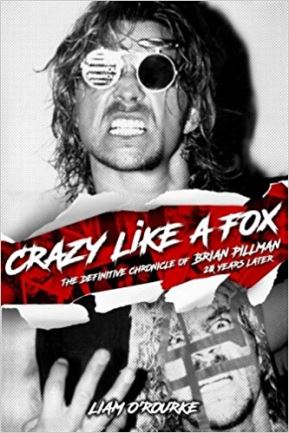 It is Liam O’Rourke, of West Midlands, England, who took up the challenge of detailing the life and personality of Pillman. The result is a gem: Crazy Like A Fox: The Definitive Chronicle of Brian Pillman 20 Years Later.

Reading the story of Pillman’s life, you can imagine the charismatic athlete telling you his tale as if he is sitting across from you sharing a beer. This book is incredibly detailed. The amount of minutiae is stunning as O’Rourke was able to find people who were close to Pillman at various points of his life; most were quite candid with their memories.

Pillman’s friends miss him and that is obvious throughout the book, but they are fair and open about the whole man. He was an amazing athlete, charismatic, a loving and caring father, and intense. He was also a dark soul who was troubled, a man who would go to great lengths to be the talk of the town, do some degrading things, and be the prototypical alpha male jock of the 1980s.As I read further and deeper into the book I found myself liking Pillman. I was drawn in by his desires. He wanted to be the best at whatever he did and O’Rourke painted such a masterful picture of this deep burning desire of a man who wanted to rise above the constraints put on him by the perceptions of others.

The rise of Brian Pillman was such a thrilling story that it could be told as a movie along the lines of Rudy. Perhaps it could end when he makes the NFL’s Cincinnati Bengals or even when he earns a contract with World Championship Wrestling. The second half of the story is about a creative genius and the demise of the athlete. The last 100 pages sent me on an emotional roller coaster that left me feeling sad for Pillman, his friends, and his children.

At 318 pages, you might think Crazy Like A Fox would be a long read, but I found it to be quick and enjoyable because of the quality of the writing. Too often wrestling biographies are glossed over, one-sided stories that are filled with questionable tales. Not this book. The author weaves together an intense timeline-driven book that created vivid pictures in my mind. It was as close to watching a television show or movie that you can get to in writing.

At one point I read a few pages to my wife, who has very little interest in wrestling, and she even remarked on the high-quality penmanship. Moreover she commented on how those few pages moved her emotionally.

Over the last 20 years I have collected an impressive line-up of wrestling books. I remember when Mick Foley published his first autobiography and it was considered the best ever wrestling book. Other books by Lou Thesz and J.J. Dillon were top shelf as well. I must admit that I have a new number one wrestling biography and it is O’Rourke’s Crazy Like A Fox: The Definitive Chronicle of Brian Pillman 20 Years Later.