The role of the interviewer in wrestling has changed over the years. In this day and age, the interviewer is used for backstage segments where they are merely there to hold a microphone, but it wasn’t always that way. In the past the interviewer was used to promote upcoming local shows and guide the wrestling talent to talk about their opponents or more.

The interviewer was integral in disseminating the important information so wrestling fans would want to buy a ticket to the next wrestling show. It was in these short interview segments that wrestlers could be creative. The wrestling talent could show their personalities and even develop their character in front of the camera. In the American Wrestling Association, Gene Okerlund was the man with the microphone and he witnessed the birth of a wrestling mega star.

Okerlund started his on-air position with the AWA in the early 1970s and left the promotion for the WWF in the early 1980s. During that time, wrestling promoter and multi-time champion, Verne Gagne entrusted Okerlund with running the interview segments between matches.

SLAM! Wrestling caught up with Okerlund a while back at the Niagara Falls Comic Con and asked him what made a good interviewer. “All people have to do is listen to what their interviewee is saying and react to it,” said Okerlund. “It is a continuing conversation. That is my thinking on the way you conduct an interview. Just pay attention and interact with the talent.” 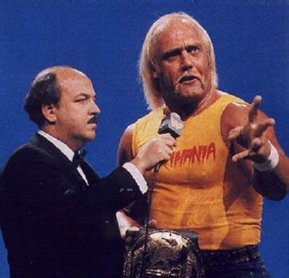 Okerlund was beloved by wrestling fans because of his unique style. He would draw the fans in by asking the question and reacting to the wrestler with facial expressions. Often times he would glance at the camera making a connection with the fans as if to say, “We are in on this together.”

One of the wrestlers Okerlund became connected to in the fans eyes from the AWA to the WWE to WCW was Hulk Hogan. The charismatic Hogan that drew multitudes of fans to the WWE in the 1980s was not as refined or outgoing when he arrived in the AWA.

“I have nothing but great memories with Hulk Hogan,” said Okerlund. “I tried to stay away from the talent in the early years which was the recommendation, believe it or not, of Verne Gagne. ‘Stay away from the talent otherwise you’re not going to be calling him Hulk, you will call him Terry.’ I have the outmost respect for this guy because when I met him he just came off of Rocky III as Thunderlips.”

Hogan’s big role in the third instalment of the Rocky franchise made him recognizable with both wrestling fans and a mainstream audience. While he was a sight to behold, he was not that polished on the microphone. “He was probably an average worker with a great body and the interviews early on with him were not easy,” recalled Okerlund. “We got him cranked up and everything kind of fit into place.”

The Hogan that told fans to say their prayers and eat their vitamins was a work in progress that Okerlund helped with. “It was not there,” said Okerlund. “He was very rough. All of those interviews were all pre-taped early on so we would have to redo quite a few with him. It eventually came all together and here we have arguably the greatest star of all time.”

Hogan’s attitude is what helped him become one of the greatest talkers in sports entertainment, and his willingness to work hard. “Oh yeah, he was very willing and anxious to learn,” said Okerlund. “He was not afraid of taking a recommendation here and there and all of that worked out in his favour because he became a very wealthy man. To that point if you look at all sports today, hockey, baseball, basketball, thirty years ago, 40 years ago guys weren’t making a lot of dough. But Hogan made a lot of money. A lot of it came from appearances, the cards, but a lot of it came from merchandise and his persona.”

Once Hogan developed the Hulk voice he turned up the personality and charisma. Fans flocked to see the 6-foot-7, 302-pound, blond-haired Adonis at arenas throughout the country. “He is arguably the greatest wrestling talent per se that the wrestling industry has ever seen,” said Okerlund. “You can talk about Lou Thesz, Verne Gagne, The Bruiser, Bruno Sammartino, but there was never anything like Hogan. He is a part of history. He really is. Those glory days when everything transitioned to this new wave place in the mid ’80s and he was such a big part of that. He was part and parcel to the rock ‘n’ wrestling connection and the mainstream media everything took over. Now we are working with social media but it is all because of Hulk Hogan. God, I would love to see him back just as an impresario, the elder statesman to represent the business. He was the best.”

Without Gene Okerlund would Hulk Hogan have developed into the cultural icon we know today? We will never know the answer, but it is safe to say that the interview skills and patience of Okerlund sure did help the immortal one.

Caleb Smith enjoyed sitting under the learning tree of Gene Okerlund. Smith recently bought an AWA Curt Hennig Remco figure and he is on the lookout for more of that series.