Abraham Lincoln is widely known as one of the most famous presidents the United States of America has ever had. What would happen if he decided to quit politics and follow his dream of becoming a popular wrestling champion? In Steve Sheinkin’s latest book Mixed Up History: Abraham Lincoln Pro Wrestler explores the possibility and presents American history to children in a fun and odd sort of way.

The children’s series is based around the adventures of Abby and Doc as they encounter people from America’s past. In this case they meet up with Abraham Lincoln after he overhears their classmates complain about having to study history. At that point Lincoln decides to quit history since he did not feel appreciated. Abby and Doc use their magic cardboard box to travel through time to meet with Lincoln and try to convince him to give history another try.

My 11-year-old daughter Avery and I read the book, which came out in January, and both agreed that it made history come alive. Avery wrote this review about the book and also interviewed the author for this article. Here is her take on Mixed Up History: Abraham Lincoln Pro Wrestler: 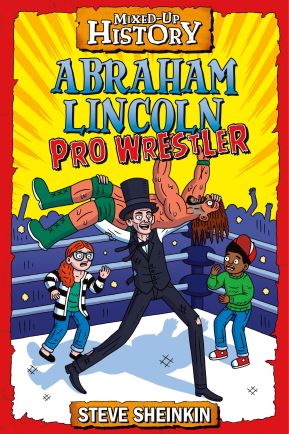 “In my opinion, this book was quite good. Here are some reasons why. First, I thought it was a really creative idea for a book and I had never seen any books like it before. Second, I liked how it had lots of history but the facts were put into context well and didn’t seem out of place. Finally, I liked how it was funny and especially how it had a reference to the Magic Tree House (series of books). In conclusion, I liked this book because it was creative, had good history, and it was funny.”

As Avery’s father, and an elementary school teacher, I can definitely say that this book would captivate the attention of young people. Just having two kids travel through time is cool enough, but when Abraham Lincoln decides to wrestle it is absolutely zany. As an adult the story kept me turning pages and had me chuckling. I would recommend it as a fun family book to read. The illustrations throughout the 147-page book certainly add to the fun. If you are looking for mainstream wrestling content this is not the place. Rather, you get a fun look at the president laying the smack down and then having to make the decision to re-enter history or not.

As mentioned earlier Avery interviewed Steve Sheinkin for this review. Here it is:

Q: Why did you choose to write about Abraham Lincoln?

A: “I’ve always been a big Lincoln fan, both for all the important stuff he did, and because of his love of telling stories and jokes. Bad jokes, according to people who knew him. I just thought he’d make a great character in this comedy/history mash-up I had in mind.”

Q: What gave you the idea for this series of books?

A: “Well, don’t get too mad, but I used to write history textbooks — the very sorts of boring books Doc and Abby and their entire class complain about in this series. For some reason, I started to wonder how historical figures like Abe Lincoln or Abigail Adams might feel about being in these books. I mean, wouldn’t it bother them to be stuck in a book where they had to do boring stuff over and over? Wouldn’t they want to escape? And if so, what sorts of adventures would they want to go on?”

Q: Why did you choose a box for your portal?

A: “There’s so much going on, I wanted to keep that part of the story pretty simple. I liked the idea of them having to jump into a box, sort of a leap of faith at first, since they don’t really know what’s going to happen. And when I thought of that image of Lincoln trying to climb out of the box and the whole thing tipping over and papers falling out of his hat — I knew that was it.”

Q: Why did you pick pro wrestler instead of any other jobs for Lincoln?

A: “It really could have been anything — which I think is what’s fun about this series. But actually, as I say in the book, Lincoln really was a very good wrestler in his younger days. And it’s just so different from what we picture him doing — sitting calmly, writing profound speeches, and signing documents. And of course, he’d have no idea what pro wrestling today is like, so I thought it would be pretty hilarious to shove him into the ring in front of a crowd.”

Q: Are you a fan of pro wrestling and if so who are/were your favourite wrestlers?

A: “I was a big fan as a kid! I’m talking old school stuff, 1980s, you know, Andre the Giant, the Iron Sheik, Hulk Hogan. Lucky Abe didn’t have to climb into the ring with any of those dudes!”

In conclusion, Mixed Up History: Abraham Lincoln Pro Wrestler is a fun book to read as a family or on your own. We certainly enjoyed reading it together. We also found it a very informative read. Good thing Abe didn’t put anyone in an airplane spin!

AVERY and CALEB SMITH have reviewed two books together and have had fun each time! We encourage you to read with your kids!