It was deja vu for Samoa Joe. As it did during his match against Finn Balor at NXT TakeOver Dallas in 2016, an accidental cut has caused controversy and frustrated Samoan Submission Machine.

Just minutes into his main event, Intercontinental Title match against champion Roman Reigns, Joe was busted open the “hard way” (legitimately) after either taking a boot to the face or falling out of the ring to the floor. 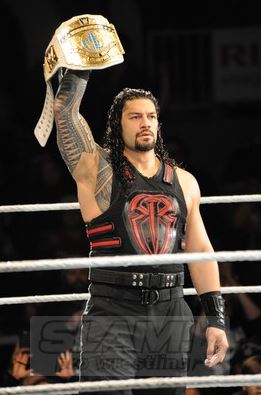 At the end of the night, Roman Reigns was still Intercontinental champion. Photos by Mike Mastrandrea

When Reigns followed him outside Joe threw him into the steel steps and the official spotted Joe bleeding profusely. The official gave the “X” sign with his arms, used to signify a legitimate injury to the production crew in the back, and medical personal came to the ring.

Once it was determined that the bleeding couldn’t be stopped the official called for the bell. Joe seemed aggravated by the call, wanting to continue. He returned to the ring to receive a Superman Punch and a Spear to put a close to the match and the evening.

Some fans though were not impressed by the production call and expressed their disappointment leaving the event and on Twitter afterwards.

“Wtf was that ending of the main event???? #WWEToronto ??? #bulls–t …the tag match stole the show,” wrote JBooth (@redbuck17) on Twitter.

“All that money for a 5 minute main event with no finish. Great job #WWEToronto #CanIHaveMyMoneyBack?” wrote Brian Joyce (@BrianJoystick).

Harlan Tsosie (@htsosie2010) Tweeted: “You know WWE is too kid n family friendly when a match has to be stopped cause a sign of Blood! lol #FirstBloodmatch.”

In a city whose rich wrestling history goes back some 80 years, blood (blading) has been routinely featured and continues to this day in the matches of many local independent promotions. Older fans remember Ric Flair, Angelo Mosca and a host of others wearing their fair share of “crimson masks” at Toronto’s Maple Leaf Gardens without so much as a whimper from the fans or promoters.

When it comes to “blading”, more recently Chris Jericho “busted open” Kenny Omega pretty badly during his now infamous attack on him in NJPW, even smearing Omega’s blood on his own face.

After approving of it for years it appears blood is off the WWE menu in some circumstances. Barring the shortened main event, the WWE Live Holiday Tour at the Ricoh Coliseum was a solid and entertaining card. The first ever meeting in Toronto between Bray Wyatt and a “Broken” Matt Hardy fired up the sold out crowd in attendance.

In a feud that could be truly epic if the WWE handles it correctly, Hardy and Wyatt stared each other down in the middle of the ring. Wyatt fiercely shoved Hardy away from him and into a corner. 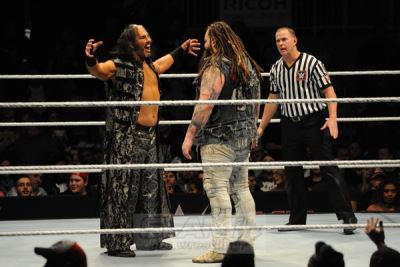 Wyatt attempted Sister Abigail and Hardy attempted Twist of Fate but both countered each other’s finishers. Wyatt threw his jacket in Hardy’s face, backed him into a corner and laid a beating on him. Two Stinger Splashes had Hardy stumbling around. Wyatt grabbed a hold of a stunned Hardy and started a strange ballroom dance routine with him.

Hardy snapped out of his haze, biting Wyatt’s hand. Hardy then threw his coat in Wyatt’s face punching him into a corner. Hardy Russian Leg Swept Wyatt to the mat and hit a leg drop for a one count.

Standing on the ring apron, Hardy and Wyatt exchanged punches until Wyatt DDTed Hardy onto the apron. Another DDT inside the ring staggered Hardy, who fired back with a jaw breaker.

Hardy jumped off the top rope only to be punched in the stomach by Wyatt. Wyatt did his “spider-walk” thingy setting up Sister Abigail. Hardy punched his way out into a Twist of Fate for the three count.

The WWE returns to the Ricoh Coliseum on Friday, March 23rd with its Road to WrestleMania Tour. The code for pre-sale tickets is “WWE2018”.

The former Bullet Club members face-off with Luke Gallows at ringside. Gallows interferes often pulling Balor outside the ring and even clocking him a couple of times. Balor pins Anderson with the Coup de Grace. 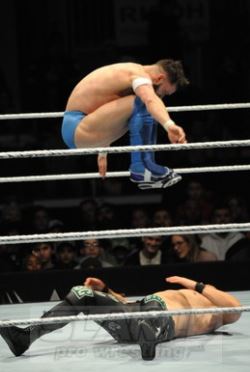 Lots of love for Goldust, who is a face now? Rhyno pins Hawkins with a Gore and then a spinebuster. 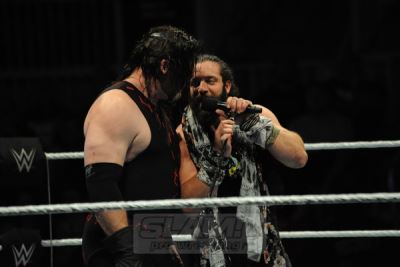 The dual musical stylings of Kane and Elias.

Elias performs his version of “Hotline Bling” by Toronto-born rapper Drake before disparaging the city as he always does. Kane comes down to the ring. Elias and Kane sing “She’ll Be Coming ‘Round the Mountain”. Elias cuts things off as he is repelled by Kane’s singing. Kane takes offense and chokeslams Elias. 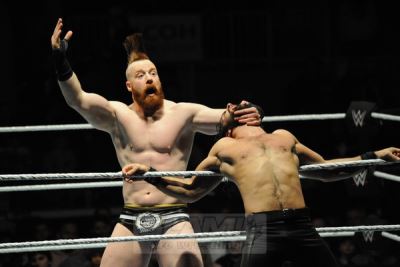 Can The Bar do no wrong? An amazing match with Cesaro even slapping on a Sharpshooter to the delight of Canadian fans. Rollins pins Cesaro with King’s Landing. 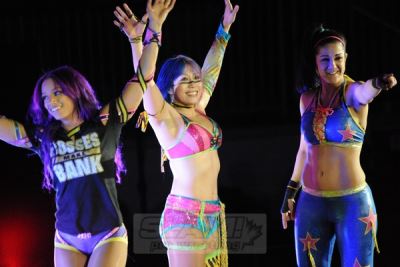 A cute moment has Bayley and Asuka take down Jax with synchronized butt attacks. Asuka makes Brooke submit to the Asuka Lock.

Winner: No Contest – Match thrown out due to injury.
Match Rating: N / A