Alpha versus Omega. The Cleaner versus Y2J. Chris Jericho versus Kenny Omega has exploded into a global phenomenon. 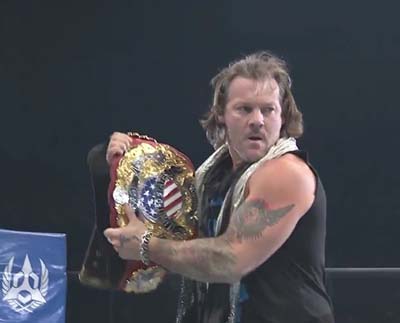 With all eyes on New Japan Pro Wrestling’s Wrestle Kingdom on January 4th, the event caps off a year in which New Japan has an unprecedented foothold in North America. A subscription service offering fans all over the world unparalleled access to New Japan’s content, a highly successfully G1 Special in USA event in the summer and the creation of the IWGP United States Heavyweight Championship has elevated the promotion’s status not only in North America but all over the world.

Jericho’s Wrestle Kingdom match was the brain child of Winnipeg’s own Don Callis, a mutual friend of both Jericho’s and Omega’s. North American fans may remember the New Japan colour commentator and now the co-executive vice president Impact Wrestling as The Jackal in WWE and more prominently as Cyrus in Extreme Championship Wrestling.

“It was an idea Don Callis thought of. He is a mutual friend of Kenny and I, he is also from Winnipeg. He pushed the idea to me and thought I would laugh it off but I didn’t and suddenly we were off and running. It took a while to get the proper deal but once everyone realized how cool it would be, we all wanted to do it. It has become the most buzz-worthy match in the business today, including anything in the WWE,” said Jericho.

That Canadian connection is one factor that also raised Jericho’s interest in the match.

“Canada is a great wrestling country. It is what I really love about this match. Basically you have Omega versus Jericho with Don Callis as the commentator. We Winnipeggers are the mecca of pro wrestling right now!” Jericho unabashedly declared.

The match has grown well beyond anyone’s expectations and as it has Jericho’s enthusiasm has intensified as well, especially since the bout will be held in Japan, a place that has hosted so many legendary, fabled matches in pro wrestling history.

“It is once in a lifetime. It couldn’t have happened last year. It probably won’t happen next year. The fact that it is in Japan makes it more legendary and mythical,” said Jericho who says the match has that Mayweather and McGregor vibe to it because nobody ever felt that match would happen, which is why the announcement took everyone by surprise.

To Jericho, the match could have taken place at WrestleMania and been just as good but it wouldn’t have been as special as it is in Japan. Fans have seen the tone of the match itself become more and more spiteful and sadistic with Jericho bloodying Omega in a surprise attack on Japanese soil and then Omega responding with a sneak attack of his own at the official Wrestle Kingdom press conference. The escalation caused NJPW to declare the match a No DQ encounter. The change hasn’t affected Jericho’s mind-set going into the match though.

Since Kenny Omega is the leader of the infamous Bullet Club faction one has to wonder if Jericho is worried about their interference, them coming to Omega’s aid as they have in the past?

“Not in the least. I don’t play well with others any way. I don’t really have too many friends in wrestling and if you look Chris Jericho has never been part of a team. I may have a confidant here and there but I will be okay. The Young Bucks have enough to worry about rather than standing up for Kenny Omega and Kenny Omega is the best bout machine. He is the best in the world but he is not better than me so I don’t think he is going to want to have help as he has got something to prove as well,” said Jericho giving his foe he just due.

Fans cannot help but to wonder too if the match opens the door for Jericho to wrestle more matches in New Japan after Wrestle Kingdom. Although Jericho isn’t ruling out working with New Japan in the future, one thing is for sure; he will not be doing is working in North America for the promotion.

“This is the one we are focusing on. Would I be open to doing more? Sure, in the right circumstance. I am not just going to go there and face anybody. There are four top guys there and that’s four matches and four rematches. I am not interested in wrestling in the United States for New Japan though. I am loyal to the WWE to a certain point. I love the idea of going to Japan to work these shows. I am a mercenary coming in to make money for myself and them. There are a couple of matches I would consider doing if my schedule works out properly but not many,” Jericho confirmed.

Although he has been focused on his Wrestle Kingdom appearance, Jericho hasn’t taken his eye off his former friend turned enemy in the WWE: Kevin Owens. Following Owens and Sami Zayn’s feud with Shane McMahon, Jericho had some surprising advice for the Commissioner of Smackdown! Live.

“He cannot fire Kevin Owens because Kevin Owens is one of the most talented stars on the roster. If he fires Kevin Owens, Kevin Owens goes to Raw and if he doesn’t go to Raw he goes to New Japan or Ring of Honor and makes money over there. So, it would be stupid of Shane to fire him,” Jericho warned McMahon.