At Friday’s Final Battle pay-per-view, Punishment Martinez has an opportunity to move up the Ring of Honor roster by winning the World TV championship. It won’t be easy, but he promises to impress.

The bout will be a Four Corners Elimination match, with Martinez vs. Shane Taylor vs. Silas Young vs. current champion Kenny King.

“I’m going into that match to leave mouths open and jaws dropping,” Martinez told SLAM! Wrestling. “I want to be a main eventer and this is the perfect opportunity for me to start down that road. They can expect to see a little bit more than they are use to seeing from me. I’m going all in. If you’ve seen me work and like anything I’ve done, I’m going to blow your mind.”

The primary goal of Martinez is to be a main event wrestler.

The 6-foot-7, 251-pound Luis Martinez, who has worked under the names Damian Martinez, Punisher Martinez, and currently Punishment Martinez, is an imposing force in wrestling. Before his wrestling days, he trained in martial arts.

Originally, Martinez was trained by his father in Japanese karate, Goju-ryu, and he won two national full contact championships in his hometown of New York City. “It was my first love when it came to combat,” said the 35-year-old Martinez.

The Ultimate Fighting Championship (UFC) was in its early days in the 1990s when Martinez was competing in Goju-ryu. “We watched the UFC 1 and 2 on tapes. We were really excited to see the bouts. We eventually thought I was going to compete out there [in UFC]. But times change. Financially it wasn’t working out. I faded away from full-time training,” recalled Martinez.

The financial hardship provided the right time to break into wrestling. Martinez was a life-long fan of professional wrestling, and signed up to train at The Monster Factory in New Jersey. The transition from Goju-ryu to professional wrestling was not easy. “At first it was very difficult for me. When you come from a background where you are told to not react much and to be quiet, and to be humble, and now I have to play this character and over react to everything. So that was the hardest part,” said Martinez.

While Martinez initially had a difficult time with wrestling training, he was a hard worker and grasped the wrestling business. His big break came in 2015 when he appeared at a ROH show.

It was during the ROH shows that he met wrestling legend Kevin Sullivan and ever since, Martinez has sought wisdom from his mentor, who was a star wrestler in the 1970s and 1980s, then moving into management roles that including booking. Sullivan “feeds me knowledge every time I go out and perform. He’s not one of those bitter vets. He loves professional wrestling. He teaches storytelling and making a connection with people,” said Martinez.

In addition to Sullivan, there are many others who have helped with the development of Martinez including Delirious, who is the head trainer at the ROH wrestling school and the head booker of the promotion. Delirious “has so much international experience. He shown me different ways of approaching the business. He is such a positive person and positivity has really changed my whole outlook of life,” said Martinez.

BJ Whitmer, who has worked in ROH since 2003, is another wrestler that has helped Martinez. “He goes out of his way to give me knowledge and make sure that I am on the right track,” explained Martinez. There are many other people that have contributed to his development since “everyone is willing to help each other. We all make each other better.” The mentality of ROH is one of collaboration rather than direct competition with the other people in the company. 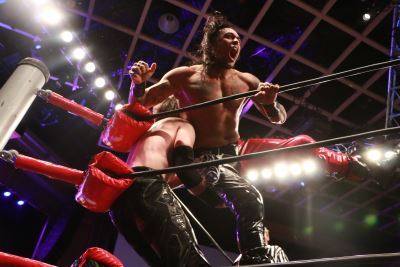 Through ROH’s business relationship with New Japan Pro Wrestling, Martinez got the second big break of his career when he wrestled in Japan.

The long plane ride to Japan gave him a chance to think about what awaited him when he landed. “I thought it was going to be difficult. All I was thinking about on that long, long plane ride was, ‘How am I going to be able to adapt?'” admitted Martinez. However, it is still professional wrestling and there is a “universal language” that everyone understands.

The Goju-ryu training helped Martinez adjust to the strong style that is common in Japan, and when wrestling in ROH he has a striking style. As a result, the transition to the Japanese style was an easy one.

“You talk about a top-notch company and professionalism where everyone is welcoming, its there [in New Japan]. It’s one of those things that hits you and, ‘Wow, they pay me to do this?’ So it’s one of those moments where you feel like I can’t believe this is my life now. This is amazing. I’ll cherish that forever,” said Martinez, who hopes to return to Japan down the road, perhaps with the ROH TV title in his carry-on luggage.

REST OF THE CARD