Just in time for Christmas wrestling legend Mick Foley’s latest book, Saint Mick, has hit the shelves of your local bookstore. Saint Mick is a Christmas journey of a man and his family that questions what is the magic of Christmas.

From the first glance at the happy holiday adorned book, the wrestling fans who have been Foley’s primary reading audience for his past tomes might be confused. The wrestling fan might ask “Is this a wrestling book?” The answer is “Not really.”

At 256 pages Foley weaves a wonderful story that touches at the frailty of dreams, hope and childhood magic. This is also the first book in which Foley shows the less than happy side of his personality as he struggles with life after wrestling and raising a family. 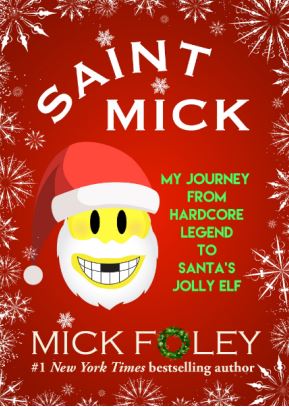 Throughout the book it seemed as if Mick was in search of meaning and direction in his life. Then he gets a little push as he is asked to be Santa at a charity event. This event filled Foley with the idea that he might have found direction by becoming Santa Claus.

His two youngest children were just at an age where their belief in Santa Claus was waning and he went to great lengths to continue the fun for another year. Soon Foley realized that it was not so much as keeping the tradition and specialsness alive for his family, but rather having his family bring joy to others.

Becoming Santa Claus is not easy — especially if you want to do it right. Two of the rules for becoming Santa Claus are don’t eat garlic for many weeks before the job and make sure your nose hairs are clipped. Mick goes to great lengths to learn all he can to become the best Santa Claus he can be. He truly immersed himself in the culture and study of all things Saint Nick!

The most touching parts of the story are when Foley and his son dress up as Santa and his helper to visit families on Christmas Eve. The magic was shared between father and son on those special trips. Mick soon realizes that the audience of one or two children fill his heart with the same thrill and love that crowds of thousands once did.

I found this book to be as real as it gets. I enjoyed Foley’s early autobiographical writings but always found them showing Mick as a pretty perfect guy with few flaws. Saint Mick really shows the heart of Mick Foley with his good traits and bad ones on full display. This honest writing made me an enthusiastic reader.

If you are looking for a Christmas story about filling your heart with love then this is it. I recommend Foley’s Saint Mick not as a wrestling book, but as writing journey through dark times and ending in the magic of the season.