For Curt Stallion, the goal is Japan, ‘but the dream is WrestleMania’

Texas native Curt Stallion has accomplished every goal he’s set for himself since he first stepped into a wrestling ring almost five years ago.

He made a name for himself in Texas, so he moved to the Midwest. He’s been wrestling throughout the United States, with his sights on Ring of Honor. He was the first man picked for the 2017 ROH Top Prospect tournament.

But for Stallion, all of these accomplishment are “steps on a staircase” to a higher calling.

“The goal is Japan, but the dream is Wrestlemania,” Stallion said. “I don’t want to shoot for the dream until I get the goal.” 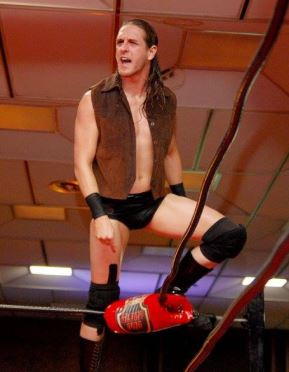 Growing up in West Texas, Stallion’s mother didn’t allow him to watch wrestling. So the day he found out why one of his friends always ran home on Monday nights sealed his fate.

“One time, I went with him to his house on a Monday and it was just over,” Stallion said. “Like, I was a real attention deficit disorder child, just spazz and class clown and all that. I saw those guys walking down to the ring with their own music, their own lighting, thousands of eyes staring at them, millions at home, and I just wanted that attention, like, so bad.”

Then the art of the sport drew Stallion in with the fact that “it looks like they’re killing each other, but they’re not really.”

“I started watching wrestling every single time it came on,” Stallion said. “I’ve missed so many things because I stayed at home and watched wrestling, and it all transitioned from there.”

One of the stars who hooked Stallion into the sport — and a dream opponent — is the Legend Killer himself. Stallion was in junior high when Randy Orton, “cocky arrogance” in tow, joined Evolution.

“Randy Orton was my first love in pro wrestling,” said Stallion, a self-proclaimed “skater kid” with a mohawk. “Chris Benoit was my first favorite wrestler, but when Randy Orton showed up, I was just captivated by him.”

Stallion picked up his entire life and moved to St. Louis six months after meeting “Unbreakable” Michael Elgin at a training camp in 2015.

“I learned more in that one week with Elgin than I had in the entire year and a half beforehand, and I was just like, ‘That’s where I need to be,'” Stallion said. “So I dropped everything and left a seven-year relationship, had a really good job, all sorts of stuff, and I just quit it all and moved to St. Louis.”

Within his first month of working with Elgin, The Lone Star said he got a Ring of Honor dark match.

Elgin said the simple fact that Stallion attended a week-long training seminar showed “he had the drive to make it.”

“[Being] willing to take a week out of normal life to spend at a camp shows how bad one wants to get better,” Elgin said. “Things like that stand out to me since I did similar things when I was early into my career.”

What makes Elgin’s training methods stand out, according to Stallion, is that he helps students hone in on their strengths.

“He picks you apart and teaches you what you’re good at, what to utilize and what you don’t need to be doing and how to do what you do to the best of your ability, pretty much,” Stallion said. “And how to get around the things that you’re not good at.”

Elgin said Stallion has improved “leaps and bounds” since their first encounter in 2015.

“I tend to have a different philosophy when it comes to training,” Elgin said, “and a lot of guys who’ve taken a camp, a seminar or joined my full-time class seem to enjoy how I teach. It’s up to them to take that teaching and apply it. Since day one I’ve seen Stallion do so.”

Stallion also is a staple in Elgin’s brainchild promotion of Glory Pro, which runs in the Midwest, typically in Alton, Ill.

“He’s a great talent, always wants to have the best match on the show, and always wants the show as a whole to be great,” Elgin said. “He’s a pleasure to be around in a event setting.” 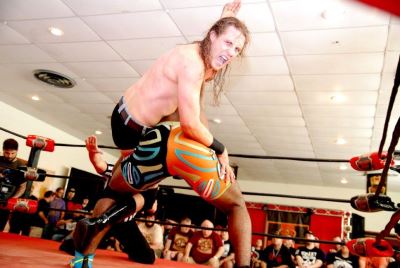 Curt Stallion faces off against Fred Yehi in August at Glory Pro: Sleep When We’re Dead in Alton, Ill.

Having reached the “ROH dark match” step on his career staircase, the Lone Star set his sights on continuing to work with ROH throughout 2015, and hoped to wrestle on the main ROH roster in 2016.

“I told myself my goal for the end of this year [2017] is to be told I’m going to be in the Top Prospect tournament, and I’m not going to stop until I do,” Stallion said.

Lo and behold, in December 2016 while attending an ROH show, Stallion was told that he was the first name on the list for the 2017 Top Prospect tournament.

“I couldn’t even get up. My legs were like noodles,” Stallion said.

Stallion faced off against Quinn, advancing to the semifinals after people “apparently blew Twitter up so much.”

“We found out right before the match that they changed their minds, so I made it to the semifinals,” Stallion said. “That was awesome.” 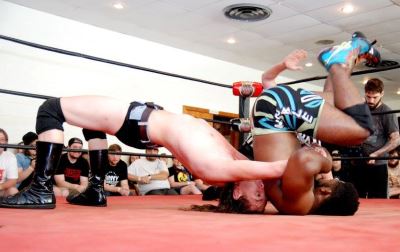 Curt Stallion goes for a pin against Fred Yehi in August at Glory Pro: Sleep When We’re Dead in Alton, Ill.

In the semifinals, Stallion fought a losing battle against Skyler.

Elgin said Stallion’s inclusion in the tournament “was a no-brainer.”

“The only shocker was why didn’t he win,” Elgin said. “He has what it takes to be successful on a big stage.”

With yet another goal accomplished, Stallion now has his sights set on Japan. Though there’s no timeframe, the Lone Star continues to climb that staircase toward ‘Mania as fast as he can.

“[I] go out there and bust my ass every match I have so hopefully somebody sees me and tells somebody else,” Stallion said.