Tattoo this: Kevin Blackwood’s only getting started

With a little more than a year under his belt, Kevin Blackwood is quickly making his way up the ranks everywhere he is working, from the expansionist-minded Smash Wrestling in Canada to the highly-acclaimed EVOLVE promotion.

On the smaller side at 5-foot-11, and 184 pounds, the 27-year-old grappler from Buffalo, New York, recalled his tryout with EVOLVE, a remarkable achievement considering he only started wrestling in 2016. 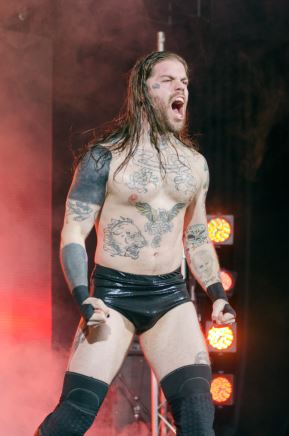 Blackwood and Kevin Bennett travelled to Detroit this past spring to have a tryout match in EVOLVE. They worked the bout on only an hour of sleep since they wrestled in Buffalo then drove to a Wal-Mart parking lot to sleep.

Quite honestly, Blackwood wasn’t sure he was ready. “He (Kevin Bennett) asked if I would be interested in going, it was a matter of, ‘Am I good enough for that? Can I handle something like that?’ But I pushed through those fears of making an ass of myself. We had the chance to pick our opponent for the match and naturally Kevin (Bennett) and I worked together. We had five minutes and I think we ended up going probably around three and a half. We crammed so much stuff into so little time and Matt Riddle (a wrestler in Pro Wrestling Guerrilla) shook our hands afterwards and told us it was awesome so that was a really strong boost for my self esteem that day. We got some good advice from Gabe Sapolsky and an open door to show up and help out at EVOLVE shows so I’m really glad we took a chance with that.”

Only two years prior to the EVOLVE match Blackwood started his wrestling training at Grapplers Anonymous in Lackawanna, New York, with Brandon Thurston and Mikey Everynite.

“Mikey was great with getting me started with bumps and rolls and basic stuff like arm drags, hip tosses, and all that stuff and slowly I stepped up to trying to put together matches and understand psychology and timing and selling and the when’s and why’s of everything and those are the things Thurston really instilled in me,” recalled Blackwood. “So much of those tiny little things that become second nature but are absolutely essential in wrestling come from working with Thurston and I think a lot of that is what got me noticed at Smash.”

In late 2016, Blackwood made his way to Smash Wrestling, originally based in Toronto but now running throughout Ontario and this weekend in Montreal, as well as airing on The Fight Network.

“When I did get there, I was intimidated to the point of almost thinking, wow, I’m never going to wrestle here,” Blackwood recalled of his first trip to Smash. “The talent was beyond anything I’d seen in person. I kept coming to shows and in January I did a seminar held by Sami Callihan and impressed him enough to be chosen for a spot on that night’s pre-show in a tag team match. From there I just kept showing up and asking about spots and bothering (owner Sebastian) Suave as much as I could without getting on his nerves.”

To keep his cardio strong and increase his in-ring skills, Blackwood still trains with Braxton Sutter (formerly Pepper Parks), who wrestles for Impact and Smash Wrestling. “He (Sutter) puts us through the ringer every week blowing us up and fine tuning those little things that I think a lot of guys forget about when they feel they’ve graduated beyond the need for training. Working with Braxton has kept me in check for sure.”

Blackwood’s goal on the independent scene is to work for Pro Wrestling Guerrilla, and, like most of the world, dreams of chasing an NXT contract to work his way up the ranks in the WWE. 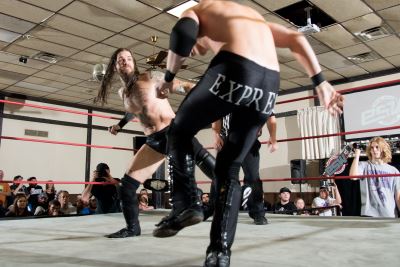 Winding up for a punch.

The tattoos that cover Blackwood’s face and arms give him a great look in wrestling. “On one side of my face I have a small cat skull, and the other I have a human tooth. My right arm is almost entirely black aside from a couple larger pieces I left open on the back of it. A lot of people ask if there’s any meaning or reason behind it, and it is basically a giant cover-up of a bunch of bad tattoos I got when I was younger, but I also honestly just liked the look of it.”

While Blackwood is a relative newcomer to the world of wrestling, he has much experience in the tattoo shop, where he has been working for over seven years. “I work at a shop in Buffalo called Arboreal Ink with a great crew who are some of my closest friends. I’ve said for a long time that the only job I’d ever quit tattooing for would be to wrestle full time but honestly even then I doubt I could give it up completely, it’s a really great opportunity to both be creative artistically and happen to be able to pay my bills doing it so I’m really grateful for it.”