Tugboat Taylor, a veteran wrestler and trainer based in Houston, has died. He was 71 years old. Besides his in-ring accomplishments, from Mid-South to Global Wrestling Federation, and having a part in the education of the likes of Booker T and Stevie Ray, Taylor could lay claim to being one of the few pro wrestlers who ever made the pages of Sports Illustrated. 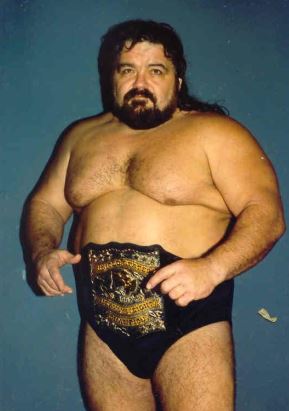 That would be the June 15, 1998 issue, with Michael Jordan on the cover. In it, Houston-based writer Randall Patterson heads to Taylor’s gym, which the headline calls the “Actors Studio for WWF wannabes.”

Getting past the traditional “is it fake?” storyline quickly, Patterson offers up a vivid description of Taylor: “His voice sounded as if he were chewing rocks. When he smiled, his mouth turned down at the corners. There are 370 pounds of Tugboat. Even at 51, he says, he’s still the meanest of the mean and the toughest of the tough.”

Tugboat Taylor’s School of Professional Wrestling was in downtown Houston, not far from the jail, and was sparse, with the warehouse containing “one exercise bike, one couch and one wrestling ring.”

Dick Taylor, born December 9, 1945, in Iowa, began pro wrestling in 1980, after excelling at amateur wrestling, and a stint in the Marines. He trained in Houston and can be seen on cards throughout the Mid-South and Texas territories in the early 1980s, facing the likes of Matt Borne, Jeff Gaylord, Wild Bill Irwin and The Patriot.

A DVD compilation of his matches calls him “one of the sport’s all-time most underrated big men … With his Sherman tank-like powerlifter’s build and charismatic ring persona, Tug was an absolute monster of the squared-circle… whether as an evil, sadistic heel or a fan-favorite babyface.”

James Beard was a referee for Global Wrestling Federation, and initially thought that it was Tugboat from WWF, Fred Ottman, coming into GWF. “I found Tug to be surprisingly athletic for his size. He wasn’t real tall, but I suspect he weighed over 350 and he did all this stuff off the ropes and was flying around. I found out he had been pretty successful in Mexico, so that explained some of that,” recalled Beard. “He was very easy to work with and you could put him with anyone and get a good match, regardless the style.”

Veteran wrestler Rod Price recalled Taylor in an email: “Tug was a friend, co worker, [John] Tatum & I worked Tug & Chaz many times in GWF, he was a good wrestler, very athletic for his size, would help anyone out, he is another one in a long & every growing list of pro wrestlers that are gone too soon. God Bless Chaz & his family.”

When his own health took him off the road — it’s tough to take bumps with an artificial hip — Tugboat began training and promoting.

In his autobiography (part 1), Booker T: From Prison to Promise, Booker Huffman shared meeting him: “This cool cat named Tugboat Taylor, who was promoting a little shoestring organization called Texas All Pro Wrestling.” Booker was performing as G.I. Bro, and often worked on Taylor’s shows, until, as he writes, one time where he sold a bunch of tickets for a show where he wrestled Killer Tim Brooks and Taylor paid him only in dollar bills. Booker threw the money at Taylor and walked out.

The Houston Chronicle profiled the indy scene around town in 2005, and Taylor weighed in: “These guys are basically playing for gas money,” Taylor said. “No one’s getting rich doing this.”

Training suited Taylor, said Lori McGee Hurst, a long-time figure behind-the-scenes in Texas wrestling, including World Class Championship Wrestling. “He was a true journeyman and he was one of the best trainers here in Texas. He was highly respected and well thought of by everyone. Great mind and talent for the business,” she shared. “He trained so many and gave them starts in their careers.”

On Facebook, Bruiser Bruce Bennett thanked Taylor back in May. “In January 1989 Tug took a chance on me, a 28 year old late-starter, and he never stopped working with me! Because I worked rotating shifts, I couldn’t always make the scheduled training sessions, but Tug would open the gym and work with me 1-on-1, making sure I didn’t fall behind the other wrestlers in my training class…..he didn’t have to do that, but he did, because he wanted me and all the others to become the best wrestlers we could be! I’ll never be able to thank you enough for all you did for me, helping me to achieve my dream of becoming a professional wrestler.” 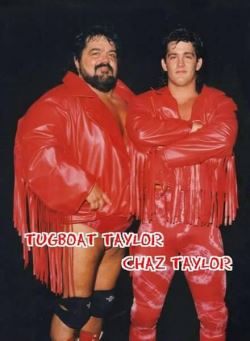 There was one student, however, nearer and dearer to his heart than any other — his son, Chaz Taylor.

“I remember him being very protective of his son,” recalled Beard. “Chaz was a kid and like a lot of kids, he was in the process of getting his education in the ring with guys who were a lot more experienced and some of them did what guys in the business do by giving him a little rough time when someone is young and a bit green. Tug would stand up for him, but he also allowed him to learn a few things the hard way.”

After learning his craft, Chaz Taylor carved out his own career in pro wrestling, primarily as a good guy during his 30-year career. He also has been a part-time actor, including appearing as a caddy in the Kevin Costner golf flick, Tin Cup, and worked a high-profile security job at Minute Maid Field for the Houston Astros, his long mullet and significant size standing out.

Like his father, Chaz trained wrestlers (including Bryan Danielson for a time) and promoted (NWA Houston).