Say yes to Jericho’s ‘No is a Four Letter Word’

If you don’t think Chris Jericho is capable of writing an engaging, yet down-to-earth motivational book that perfectly combines his journeys to success as a wrestler and a rock star, you might just make the list.

Jericho’s latest tome (one of the many synonyms he busts out ad nauseam), No Is a Four-Letter Word: How I Failed Spelling But Succeeded in Life, gives readers new insight into the Ayatollah of Rock ‘n’ Rolla’s career solely through the guise of advice he’s picked up along the way.

Essentially, Jericho offers the average wrestling fan a motivational book disguised as wrestling and rockstar road stories and his foray into Hollywood, broken down into 20, easy-to-digest chapters — principles, if you will.

Beginning with the Mike Damone Principle and ending with the Ted Irvine Principle, Jericho pulls advice from all facets of his life, showing that regardless of the career one chooses, success is always an option if you’re willing to work for it.

Classic Jericho wit, campy humor and borderline obnoxious jokes fill the pages, but the chapters always come full circle, ending with a moral or ethical takeaway. His personality bursts off all 216 pages (epilogue included), making No is a Four Letter Word a quick, if not thought-provoking, read. 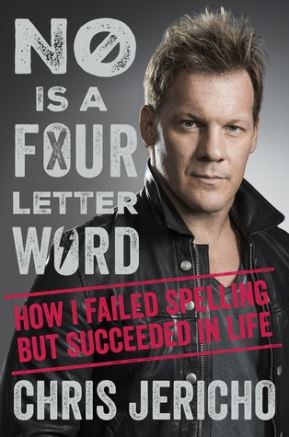 While some stories in No is a Four Letter Word overlap with his three previous writings, Jericho does a great job of condensing stories and, in most cases, putting in a cheap plug for the previous titles.

As a treat for those of us who fall in the “Constant Reader” category, having stuck with him through his other literary endeavors, Jericho casually sprinkles in some words of his own creation, such as “froot” and (my personal favorite) “ricockulous.”

What’s great, though, is that Jericho’s brand of writing and storytelling (made-up words included) draws the reader in so much that they might not even realize the solid life advice our savior is subtlety planting in their minds. But in true fashion of ensuring his point comes across, Jericho utilizes the epilogue to remind his Constant Readers of the goal of his book and that he hasn’t always been the sexy beast we know and love. It took believing in himself, constantly reinventing himself and sometimes being a bit of an asshole (see The Steven Austin Principle) to make his dreams come true.

It’s clear Jericho is catering to his wrestling fan base, but he also doesn’t ignore his other passions of music and Hollywood. Being given a glimpse into Jericho’s successes and, more importantly, failures outside of the wrestling world is even more important. Devoted Jericho fans know the basics of his career, what he likes and doesn’t like about it and everything in between. It’s the stories like how he jumped through hoops auditioning to host America’s Funniest Home Videos and lost the gig to the lengths he’s gone to to make his podcast, Talk is Jericho, a success that really get to the crux of the reason for Jericho even penning this book.

Just as Jericho always seems to come back better and refreshed after stepping away from the squared circle, let’s hope he keeps that trend going with his writing endeavors as well.