Petey Williams back after three years away

The phenomenon known as “muscle memory” occurs when something is done so often and so long that ultimately the body reaches maximum efficiency and effectiveness. And even if the action is stopped, it can easily get back to that peak performance level in short order upon restarting. In the case of Petey Williams – who’s recently returned to wrestling after a three-year retirement, perhaps it should be called “Maple Leaf Muscle memory” instead. 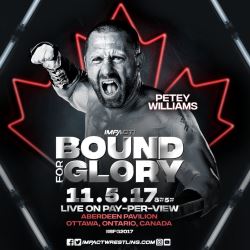 That would explain why Williams – who recently rejoined Impact Wrestling, the company with which he’s most associated – doesn’t look like he’s lost a step, despite having stepped away from the ring for three years.

“Yeah, the retirement didn’t last that long,” he acknowledged to SLAM! Wrestling who sat down with him last weekend at the XICW Return to Cobo event in Detroit. “But here’s what happened.”

“I was reluctant to do it. But then a friend of mine, Dennis Farrell, asked me if I wanted to do a podcast. After I started doing that, I realized I enjoyed talking about the business and being involved in it. After I’d been doing the podcast, I was contacted by Scott D’Amore. He told me (about Impact Wrestling), ‘I think you’ll really like the new schedule. We’re not filming every week, and I know you’re looking for that kind of schedule.’ So I was really getting pulled back into wrestling on two ends. I hemmed and hawed about it for a while, but long story short, I finally came back.”

Since his return at Impact’s Destination X show, Williams was part of the taping for the next several weeks’ worth of TV, which airs weekly on Thursday nights on Pop TV in the United States and The Fight Network in Canada.

“And I’m happy to say,” he smiled, “that I’ll be appearing in Ottawa at Bound for Glory (the company’s flagship pay-per-view event, taking place on November 5 in Ottawa’s Aberdeen Pavillion) and for the TV tapings following that. To be back in my home country, I’m really excited to be part of that.”

He’s also excited to be part of the Wrestling Perspective Podcast, which he does along with Farrell. Talking about it, it’s clear to see the camaraderie between the two of them, which they say helps make the podcast a joy for them, and they hope a joy for their listeners.

“We’ve been friends for many years,” said Farrell, “and that really comes out (in the podcast). We talk about Raw, Smackdown, Global Force, news, rumours. But we also even get into our our fantasy booking, which is a cornerstone of being a fan. I love wrestling, and Petey loves wrestling, and we love to talk about it.” 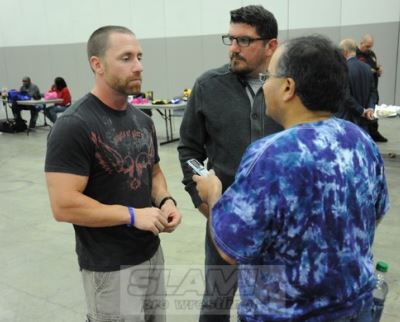 “We try to be funny,” Williams continued. “And one thing that’s kind of unique is that we ask for fan interaction. We really want to incorporate the fans, because we love to hear what they think — they probably know more than us in a lot of ways.”

The fans were also a big reason why Williams decided to return to the ring.

“I really missed the fans, and being able to perform in front of them. When I was retired, I enjoyed being a wrestling fan again – to not be in the business, and watch it on TV and follow the storylines. It was being a fan that made me want to become a wrestler in the first place. And it’s the fans that made me want to come back.”

Fans in Windsor, Ontario – Petey’s hometown – will get their chance to see him perform this Saturday when he appears at Border City Wrestling’s “Excellence” show, taking place at the Sportsplex at St. Clair College (2000 Talbot Road West). Though his opponent hasn’t been announced yet, Williams is certain that he’ll be breaking out famous Canadian Destroyer flip piledriver.