Joe Hendry does not lack for confidence

When you meet the 28-year-old Hendry you are instantly struck by his self-confidence. “I will become the WWE champion,” stated Hendry as a matter-of-fact at a recent SMASH Wrestling show. Well spoken and comfortable in his own skin Hendry knows that the road might be long to get to wrestling stardom, but he believes his foundation is solid. 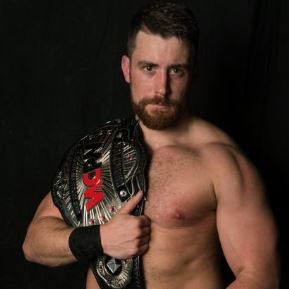 Hendry was not a newcomer to the entertainment business when he entered his first wrestling school. For a decade Hendry had been in the music industry and was even signed to the Sony label. “I was a musician for 10 years,” said Hendry. “I had two goals — music and wrestling and wrestling didn’t seem possible because I thought I was too small to be a wrestler.” When it became evident that music was not going to work out, Hendry switched his sights to training for wrestling.

At that time he was showing the world that on the outside he was doing great, but inside he was pretty miserable. One dream had fallen away, he didn’t have a job and debts were piling up. Something had to change. When Hendry started training for wrestling things started to come into focus for him. The holder of a Master’s degree in business and marketing found the joy and passion he had been lacking and it was inside of a wrestling ring.

A native of Edinburgh, he started under the tutelage of Damian O’Connor (current NXT wrestler Killian Dain) at the Source Wrestling School; he also trained under Mikey Whiplash, Marty Jones and Robbie Brookside. With such a varied cast of trainers, the 6-foot-2 Hendry was ready to learn.

One of the true legends of British wrestling, and NXT guest trainer, Johnny Saint got to work with Hendry. “Early on in my career I have trained with Johnny Saint and Marty Jones,” said Hendry. “I have wrestled Johnny Saint in the gym and he can still go. When he wrenches your arm, you hit the mat. At 70-something years old he is as crisp as ever, he is unbelievable. He can still do all of his transitions and he is happy to teach them to people who want to learn.”

Current NXT trainer Robbie Brookside made a huge impression on Hendry. “My journey through professional wrestling feels like I have been playing the WWE video game and you play the career mode,” stated Hendry. “At the start of my training, Robbie Brookside, who we call Mr. Brookside, he decided to come up and train with us and got to train us 10 a.m. to 10 at night every day. I have had 14 of those full days in the ring with Robbie Brookside at the start of my wrestling career so that is a big part of my foundations. The one word I would use to embody everything Robbie Brookside is, the way he trains the way he lives is passion. Whether he is talking with a prospect or someone who doesn’t show the skills right away is the same effort, the same passion and he expects that passion to be in everything you do. It makes you put more in to everything. You should be exhausted after a match.”

Marty Jones, another British wrestling legend, impressed Hendry with his immense knowledge. “I do little things on offense such as the palm strike is homage to Marty Jones,” said Hendry. “The thing I take from Marty Jones is his finishes. Marty just sees that and can get the reaction. If you want to talk to a guy who can put a new spin on it he is your guy.”

Within a few months Hendry found himself in a WWE ring for a tryout and later on TV for RAW as a Russian character. Hendry took to the opportunities that were put in front of him. With the early WWE interest Hendry started to consider what could set himself apart from his peers on the wrestling scene in the United Kingdom and that was his music. Hendry is known for his unique entrance songs and videos, that he writes and performs, that get the crowd singing along and invested in his character before he even steps in the ring.

During his first Canadian tour, around Ontario for SMASH wrestling, he was surprised by the reaction of the fans to his music in a country far from home. “The ‘ICW me and you’ video I use as my entrance video, there is no context,” said Hendry. “I needed to get jobs and I wasn’t known as a wrestler. This video started to get traction. It mentions wrestling very briefly so there is no context and people learned to like it. I custom build these pop songs to get that response but I don’t expect to get that response everywhere.”

In three and a half years learning his trade on the independent scene Hendry has made a name for himself as a wrestler with diverse styles that range from technical to old fashioned brawler. It has been his keen mind, personality and diverse move set that has enabled Hendry to fight a variety of high level opponents such as Albert El Patron, Drew Galloway, and WWE Hall of Famer Kurt Angle.

One day a fan Tweeted him a question “Who would you love to wrestle?” Hendry retweeted that he would love to wrestle Olympic gold medalist Kurt Angle and he would do anything to make it happen. To Hendry’s surprise Angle contacted the young wrestler and set in motion the greatest match of his career.

“For WCPW I wrestled Kurt Angle,” said Hendry. “I had to make a video for Kurt Angle not just about wrestling Angle but making fun of his achievements could have gone one of two ways and Kurt loved it. It was high pressure, main event on a pay-per-view and it went well.”

With such a diverse resume at such an early part of his career Hendry has had to work to show the other wrestlers that he is worthy of this position. “You won’t be the most popular guy in the dressing room when you only have three years experience and you wrestle Kurt Angle,” said Hendry. “I would like to think I am one of the boys now, but it took a long time to earn their respect.”

Joe Hendry can put another feather in his cap as he travels back to Canada for WCPW and Smash Wrestling’s Canadian leg of the Pro Wrestling World Cup. The event emanates from Toronto’s Phoenix Concert Theatre, and features more top-flight competition for Hendry such as Michael Elgin, Davey Boy Smith Jr., Renee Dupree and Tyson Dux.

Hendry, the WCPW champion, will make the most of this opportunity. As his theme song says “If you want some, come and get some.”

Joe Hendry is among many competing on Sunday in Toronto for a doubleheader at the Phoenix Concert Theatre, with SMASH Wrestling’s Have Ring, Will Wrestle (afternoon show) and WCPW’s Pro Wrestling World Cup Canadian Qualifier (evening)